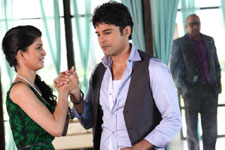 Kritika Deval / fullhyd.com
EDITOR RATING
4.5
Performances
Script
Music/Soundtrack
Visuals
5.0
4.0
6.0
6.0
Suggestions
Can watch again
No
Good for kids
No
Good for dates
No
Wait to rent it
Yes
Prerequisites to being sinister:

If you make it look like a duck, quack like a duck, and swim like a duck; then it probably is a duck, right? This seems to be the reasoning with which the makers of Table No. 21 constituted pretty much everything about the movie, except the premise, which is its only aspect where ingenuity gets a chance to shine through in the cloudy skies of this clich?©-land.

Let's begin from the beginning where, incidentally, it all begins. Vivaan (Rajiv Khandelwal) and Siya (Tena Desae) Agasthi are a couple whose marriage is now in a rut. Vivaan is a casualty of downsizing, thus forcing Siya to take on the role of the "bread winner". Just as this change in equation is taking a toll on their relationship, Siya wins an all-expenses-paid trip for two to Fiji, during a time that happily coincides with their anniversary.

So, off they fly to the lovely islands, do the expected song-and-dance, and spend a blissful day or two there before the supposed fun starts. Enter Mr. Khan (Paresh Rawal), their seemingly benevolent host, who gives them an offer they can't refuse - take part in his reality show "Truth or Die" in which the only rule is, "if you lie, you die" (the aforementioned "sinister" catchphrase).

All they have to do is answer eight questions and complete a few tasks, and they can win Rs. 21 crores. What does he get out of it? Hits, on his website table21.com.

And thus begins a series of questions and tasks ranging from mildly entertaining to utterly inane, stopping by at the ridiculous for variety. The first task, for instance, is for Vivaan to kiss Siya in public, an occurrence that only an Indian would find eventful. Considering that he'll be getting Rs. 1 crore just to kiss his wife out in the open, you'd think he'd just get out and plant one on her.

But, no, what you get is moralizing, drama, and a mawkish flashback, and then a kiss so lukewarm, you're left wondering what the deal is. This whole buildup and Hindi-serial-like drama around undeserving events (they almost get themselves killed trying to save Siya's hair!) is something that you'll see throughout.

Somewhere halfway into the show, rather belatedly methinks, Vivaan starts smelling fish. This is when the tasks start getting tougher, and it is made clear to them that can check out any time they liked, but they can never leave.

Now, they start figuring out that the whole deal wasn't mere chance, but that it was backed by an agenda. Khan wants something, and they need to find out what, before it's too late.

All of this, backed by strong performers like Rawal and Khandelwal, should've made for a taut thriller. The concept, however, is thoroughly let down by the shaky screenplay, and the lack of clarity as to what the point is. Is it about being pushed into a corner? Is it about they avarice and its effect on people? Is it about how the Indian woman loves her silky tresses to death, literally? You can't really tell, until the climax, of course, when the makers practically spoon-feed you the answer.

Paresh Rawal tries his best to do justice to his dimension-deficient character. Khandelwal constantly skips rope between underacting and overacting. Tena Desae is too busy looking good for the camera to emote properly.

The visuals are good enough, but the stunning beauty of Fiji has been sorely under-utilised. The soundtrack and the background score are a tiny notch above mediocre.

Verdict: Table No. 21 might catch your attention, and hold it, as you skim through the channels on your TV. There is no need to shell out the big bucks for this one.
Share. Save. Connect.
Tweet
TABLE NO. 21 SNAPSHOT 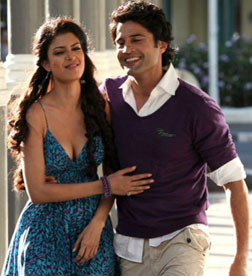 ADVERTISEMENT
This page was tagged for
Table No. 21 hindi movie
Table No. 21 reviews
release date
Rajeev Khandelwal, Tena Desae
theatres list
Follow @fullhyderabad
Follow fullhyd.com on
About Hyderabad
The Hyderabad Community
Improve fullhyd.com
More
Our Other Local Guides
Our other sites
© Copyright 1999-2009 LRR Technologies (Hyderabad), Pvt Ltd. All rights reserved. fullhyd, fullhyderabad, Welcome To The Neighbourhood are trademarks of LRR Technologies (Hyderabad) Pvt Ltd. The textual, graphic, audio and audiovisual material in this site is protected by copyright law. You may not copy, distribute, or use this material except as necessary for your personal, non-commercial use. Any trademarks are the properties of their respective owners. More on Hyderabad, India. Jobs in Hyderabad.