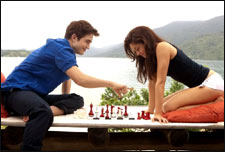 Nupur Barua / fullhyd.com
EDITOR RATING
4.0
Performances
Script
Music/Soundtrack
Visuals
5.0
5.0
4.0
6.0
Suggestions
Can watch again
No
Good for kids
No
Good for dates
Yes
Wait for OTT
Yes
Vampires - the stuff that darkest fantasies were made of, till a lady named Stephenie Meyer decided to explore the possibility of a high school romance between a fanged and pale-faced being and a warm-blooded, pink-cheeked human. She then placed them in a love triangle, with the 3rd individual being a werewolf, no less (brilliant concept, that).

Keeping in mind the inherent nature of the genre, Ms. Meyer made up her mind to be as 'intense' as possible, in lieu of the 'dark'. She dispelled with myths such as vampires being nocturnal creatures (in her world, crystals embedded in the skin shine in sunlight), and loss of control at the sight of blood (they hunt animals and drink their blood).

And, before you could say "Bram Stoker", teenagers went hysterical, and filmmakers clambered over one other to bring to life the characters that seemed to have captivated the young world. The filmmakers, still laughing all the way to the bank, have presented the world with the 4th instalment, which is also the first of 2 parts, of The Twilight Saga (for the uninitiated, there are 4 Twilight books, on which the movies are based) - Breaking Dawn Part 1.

There is no doubt about the fate of the movie, if footage of screaming fans outside theatres is anything to go by. Instead, let us look at the story so far, so we are well-prepared for the final movie that releases exactly a year from now.

There is a girl named Isabella Swan, a.k.a. Bella (Kristen Stewart), who lives in the small town of Forks with her father, a cop (Billy Burke). Although she is not exactly the hottest thing around, as her best friend Jessica (Anna Kendrick) feels compelled to point out in this movie, and without too much intellect, all the boys are in love with her. The sullen Bella loves the reclusive, not-so-hot Edward Cullen (Robert Pattinson, who has now become the most desirable poster boy in recent times).

It took Bella 3 movies to convince Edward that she loves him enough to be "turned" - in other words, she wants to be a vampire, too. Edward had one condition - because he is so old-fashioned (read: more than a century old), she has to marry him before he can go all the way (a process that, obviously, involves nibbles and bites).

In the meantime, Bella's childhood friend Jacob Black (Taylor Lautner), who belongs to the Quileute tribe (the members of which are shape-shifters and werewolves), is in love with her as well. Jake wants Bella to give up her foolish desires to become an immortal.

In Breaking Dawn Part 1, Edward and Bella get married, after an agonising series of dream sequences and apprehensions. The couples plan to consummate their relationship while Bella is still human, and the newly-weds honeymoon in an island in Brazil. Despite Edward's anxiety, they make love, and it is only later that Bella realises that not only is the bedroom destroyed, but she also has bruises all over her body.

While Jacob sulks and plots to avenge what he is convinced will be Bella's murder, he soon learns that Bella is pregnant, with the foetus growing at an alarming rate. Bella is determined to have the child, despite Carlisle's (Peter Facinelli) misgivings. The Quileute wolves plan to kill Bella before her monster-child is born, but Jacob breaks away from the pack and throws his lot in with the vampires, in an effort to protect the love of his life.

Like the previous movies, Breaking Dawn Part 1 is faithful to the book. The film deals with the first 2 parts of the book, written from the perspectives of Bella and Jacob, respectively.

But then, Bella's strange hold over every person she comes in contact with is not explained. Near strangers are willing to give up their lives for her, and the bad elements become obsessed with hurting her, for no obvious (or even justified) reasons.

That she is a confused young girl with serious issues (such as being in love with 2 boys at once and opting to marry the dead one) is a given, and, disturbingly, inspiring for many young minds. Meanwhile, There is even a moral - abortion is a sin, even if giving birth to a monstrous child can kill you.

In a recent article, the cast and crew of the Twilight series confessed to being "sick of each other", having spent so much time together over the past few years. This is apparent in the chemistry amongst the actors. They all seem to sleepwalk through their parts, and it is only the newer actors who show more enthusiasm.

Robert Pattinson, despite his cult status, has still not learned how to emote effectively. Kristen Stewart looks older, and this movie probably showcases the best of her acting abilities. She is the protagonist, and she rises to the occasion. Taylor Lautner seems confused at suddenly finding himself with no love and no pack.

Visually, Breaking Dawn Part 1 does not break records. Sure, the cinematography is great, but there is plenty of gore that could have been more aesthetically shot. There are no real villains, and even the Volturi is absent from the larger picture.

Strictly for Twilight aficionados, the latest addition to the series is definitely not for children, although the novel, in a twist of fate, was awarded the "Children's Book of the Year" at the British Book Awards.
Share. Save. Connect.
Tweet
THE TWILIGHT SAGA -... SNAPSHOT
THE TWILIGHT SAGA - BREAKING DAWN - PART 1 SNAPSHOT

ADVERTISEMENT
This page was tagged for
The Twilight Saga - Breaking Dawn - Part 1 english movie
The Twilight Saga - Breaking Dawn - Part 1 reviews
release date
Kristen Stewart, Robert Pattinson
theatres list
Follow @fullhyderabad
Follow fullhyd.com on
About Hyderabad
The Hyderabad Community
Improve fullhyd.com
More
Our Other Local Guides
Our other sites
© Copyright 1999-2009 LRR Technologies (Hyderabad), Pvt Ltd. All rights reserved. fullhyd, fullhyderabad, Welcome To The Neighbourhood are trademarks of LRR Technologies (Hyderabad) Pvt Ltd. The textual, graphic, audio and audiovisual material in this site is protected by copyright law. You may not copy, distribute, or use this material except as necessary for your personal, non-commercial use. Any trademarks are the properties of their respective owners. More on Hyderabad, India. Jobs in Hyderabad.