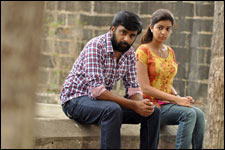 Deepa Garimella / fullhyd.com
EDITOR RATING
2.0
Performances
Script
Music/Soundtrack
Visuals
5.0
2.0
4.0
5.0
Suggestions
Can watch again
No
Good for kids
No
Good for dates
No
Wait for OTT
No
Poverty? Check. Actors you can't recognize and don't care about? Check. Unkempt men in lungis tied up with underpant-revealing precision? Check. One-liner humour that you can't even bring yourself to chuckle at? Check. "Dark recesses of the human mind" kind of babble? Check. Faux arty feeling all throughout? Check, check, check.

Welcome to this fortnight's dubbed import, released in sync with its Tamil original, Poraali. The type that is watched by people who like movies that have "something different". And bear with it they will, since this is just the booby-trap-laying kind of movie designed to look and feel offbeat.

Sangharshana opens, in all seriousness, with a voice philosophizing about animal instincts, and "the animal in all of us", and how this animal needs to be tamed. Then, the quote "Man is a social animal" flashes on screen. That this quote is irrelevant to the topic in question occurs to no one. This is the kind of arbitrariness that Sangharshana, like many other movies, suffers from - discrete red herrings here and there adding up to nothing.

Kumar (Sasi) and Vikram (Allari Naresh) are two friends who have run away to Hyderabad (read: Chennai, with none of the signboards changed) to live with their friend (Ganja Karuppu). They start earning a living at a petrol station, but since Kumar is an enterprising man - not to mention very large-hearted - he gets his friends to join him in a business that involves running errands for people.

All goes well, and Kumar and Sasi start having love lives, too, but a flashback bolts out of the blue like nobody's business. Both Kumar and Sasi have dark pasts that they are running away from.

What the film's focus is isn't clear exactly. The director seems to want to tell us that there are people in this world who will label certain others as mentally-deranged just so they can get what they want out of them. There is also a brief look at epilepsy and a well-meaning message that people with seizures need to be treated in a humane manner.

But otherwise, this is also a movie with two disconnected halves. The first is the kind that might get you curious if you've stumbled on it while switching channels. This one is an easy-going drama of the two friends settling down in the city and dealing with random characters.

The second is a flashback with a zillion characters, and is further split into two stories - Kumar's and Vikram's. While Vikram's involves a strange tryst with a mental asylum, Kumar's is a saga of evil relatives and their greed for money.

In any case, the lazy direction ensures that you don't find any of that interesting. The performances aren't anything to speak about, and in fact, Sasi, the much-hyped lead, is an overrated actor. Allari Naresh is confined to the sidelines, and is around only in the first half - a huge disappointment to Telugu audiences. And the songs and the visuals are about alright.

Skip this one in the theatres. You'll know why we warned you when you sneak a peek when it's eventually aired on TV.
Share. Save. Connect.
Tweet
SANGHARSHANA SNAPSHOT

See Sangharshana full details
SANGHARSHANA USER REVIEWS
1 - 1 OF 1 COMMENTS
POSITIVE  |  NEGATIVE |  NEWEST  |  OLDEST  |  MOST HELPFUL  |  LEAST HELPFUL
USER RATING
8.0
1 USER
Performances
Script
Music/Soundtrack
Visuals
10.0
9.0
8.0
8.0
Can watch again - NA
Good for kids - NA
Good for dates - NA
Wait for OTT - NA
Rahul on 4th Dec 2011, 8:39pm | Permalink
incredibly entertaining film with a social message. Very hard to find such a balance and still pull it off in style. If this is the quality of dubbing cinema then we telugu people need more of it !!! :)

ADVERTISEMENT
This page was tagged for
Sangharshana telugu movie
Sangharshana reviews
release date
Sasi Kumar, Allari Naresh
theatres list
Follow @fullhyderabad
Follow fullhyd.com on
About Hyderabad
The Hyderabad Community
Improve fullhyd.com
More
Our Other Local Guides
Our other sites
© Copyright 1999-2009 LRR Technologies (Hyderabad), Pvt Ltd. All rights reserved. fullhyd, fullhyderabad, Welcome To The Neighbourhood are trademarks of LRR Technologies (Hyderabad) Pvt Ltd. The textual, graphic, audio and audiovisual material in this site is protected by copyright law. You may not copy, distribute, or use this material except as necessary for your personal, non-commercial use. Any trademarks are the properties of their respective owners. More on Hyderabad, India. Jobs in Hyderabad.