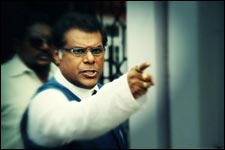 Nupur Barua / fullhyd.com
EDITOR RATING
3.5
Performances
Script
Music/Soundtrack
Visuals
2.0
6.0
5.0
7.0
Suggestions
Can watch again
No
Good for kids
No
Good for dates
Yes
Wait for OTT
Yes
Dam999 has been in the news for a while now, for various reasons. The director and writer, Sohan Roy, is an ex Marine Engineer, who based the movie on his own short documentary, Dams - The Lethal Water Bombs.

Despite the actors and the director messing up a movie that could have become a cult of its own, you will walk out of the theatre with the issue still playing on your mind. Sohan Roy highlights the corruption of local leaders and the helplessness of residents, both responsible for the slow destruction of this country. It is not enough to lament over the issue - the movie seems to say - do something about it!
Share. Save. Connect.
Tweet
DAM 999 (HINDI) SNAPSHOT

ADVERTISEMENT
This page was tagged for
Dam 999 (Hindi) hindi movie
Dam 999 (Hindi) reviews
release date
Ashish Vidyarthi, Linda Arsenio
theatres list
Follow @fullhyderabad
Follow fullhyd.com on
About Hyderabad
The Hyderabad Community
Improve fullhyd.com
More
Our Other Local Guides
Our other sites
© Copyright 1999-2009 LRR Technologies (Hyderabad), Pvt Ltd. All rights reserved. fullhyd, fullhyderabad, Welcome To The Neighbourhood are trademarks of LRR Technologies (Hyderabad) Pvt Ltd. The textual, graphic, audio and audiovisual material in this site is protected by copyright law. You may not copy, distribute, or use this material except as necessary for your personal, non-commercial use. Any trademarks are the properties of their respective owners. More on Hyderabad, India. Jobs in Hyderabad.