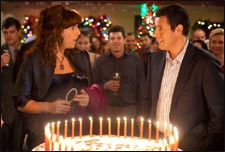 Shruthi / fullhyd.com
EDITOR RATING
3.0
Performances
Script
Music/Soundtrack
Visuals
3.0
2.0
3.0
2.0
Suggestions
Can watch again
No
Good for kids
No
Good for dates
No
Wait to rent it
No
There are some holiday movies that you so love that you don't mind seeing them every year (think Home Alone), and then there are some that leave you wondering why you even wanted to watch a movie, and even if it was a movie, how it ever became this one. Adam Sandler, maybe? Well, that ain't working this time.

Jack Sadelstein (Adam Sandler) is an advertising executive who lives with his wife and 2 kids in Los Angeles. Each year, his sister Jill (Adam Sandler) visits him for Thanksgiving, an event he dreads.

Now, it's that time of the year again, and enters Jill - cranky, needy and all the things that Jack hates. His kids love her, though (you never fathom why, don't even try), and his wife (Katie Holmes) does her best to keep Jill in good spirits.

Easy to figure this in 5 minutes of meeting Jill, but no, one isn't let off that easily. The point's driven home over and over through long-ish sequences of bad humor and clichÃ©d situations.

There's also this time when the whole family gets Jill to register on a dating site and start dating, and that's when you start cringing at how lame the movie is. Ok, so we get the point. Jill's not easy to fall in love with, and Jack's taking her visit pretty badly for a brother.

Meanwhile at work, Jack's trying to rope in Al Pacino (playing himself) for a commercial. On a guilt trip for saying/doing something nasty to Jill, Jack takes her to a Lakers game as his date. There, he meets Al Pacino (doing the eccentric celebrity act), and tries to initiate a conversation.

But hey, this is a "Jack and Jill" movie, and you can't afford to shift focus, even if Al Pacino seems like the light at the end of your tunnel. So as luck and lack of creativity would have it, Al Pacino takes a fancy to Jill and starts wooing her. Something about common roots in the Bronx and all. And then there are more predictable twists and turns before the movie finally ends.

There are way too many things about this movie that leave you wondering. How did sister-hating Jack suddenly realize his sister's not bad at all? Does Al Pacino really fall for a woman because she's from the Bronx? Is it okay to overdo farting jokes? How does Jill become lovable towards the end when, for most of the movie, the agenda is to show her in poor light? All better left unanswered.

Adam Sandler in a double role is only double jeopardy. No one can save a movie that hasn't an original line or a real plot.

Katie Holmes, as Jack's nice wife, fills a role that has absolutely nothing going for it. It's almost like a filler - somebody in the family has to stand up for Jill, no? Al Pacino is wasted in an inconsequential role, but is brilliant, nevertheless.

Well, do something nicer for the holidays instead of this. Spend time with your sister, shop, eat, stare at the ceiling, even; anything at all. Give this a miss, you won't miss much.
Share. Save. Connect.
Tweet
JACK & JILL SNAPSHOT

ADVERTISEMENT
This page was tagged for
Jack & Jill english movie
Jack & Jill reviews
release date
Adam Sandler, Al Pacino
theatres list
Follow @fullhyderabad
Follow fullhyd.com on
About Hyderabad
The Hyderabad Community
Improve fullhyd.com
More
Our Other Local Guides
Our other sites
© Copyright 1999-2009 LRR Technologies (Hyderabad), Pvt Ltd. All rights reserved. fullhyd, fullhyderabad, Welcome To The Neighbourhood are trademarks of LRR Technologies (Hyderabad) Pvt Ltd. The textual, graphic, audio and audiovisual material in this site is protected by copyright law. You may not copy, distribute, or use this material except as necessary for your personal, non-commercial use. Any trademarks are the properties of their respective owners. More on Hyderabad, India. Jobs in Hyderabad.