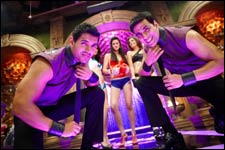 Nupur Barua / fullhyd.com
EDITOR RATING
4.0
Performances
Script
Music/Soundtrack
Visuals
4.0
5.0
6.0
6.0
Suggestions
Can watch again
No
Good for kids
No
Good for dates
No
Wait to rent it
No
In a world that thrives on nepotism and family ties, it is but understood that a son has to follow in his father's footsteps. Fortunately for the man (David Dhawan) who made Govinda a one-man comic act, the scion Rohit Dhawan decided to take up direction. Unfortunately for the audience, the young man is confused and inexperienced, therefore delivering a debut that leaves you staggering with disbelief.

Desi Boyz - the name itself gives away all the themes that the movie is likely to have - patriotism, bromance, foreign country, gora versus Indian, bimbette girlfriends, at least one mother, and some legal issue or the other (think Dostana).

2 men, Jerry/Jignesh Patel (Akshay Kumar) and Nick Mathur (John Abraham) live together in a huge apartment in London. They are oblivious to the world around them in the recession-hit 2009, in case you have not gauged their intellect yet, till they find themselves jobless and anxious. Nick has a luxury-loving girlfriend, Radhika Awasthi (Deepika Padukone), and he has already proposed to her. Jerry has an orphaned nephew that the Social Service guys will send to a foster home unless he can prove that he is a competent guardian.

With their desperation firmly established, the duo drown their sorrows at a local pub, when suddenly a flashy visiting card comes sliding down the bar counter. Curious, they go to the address mentioned, and discover that the owner (Sanjay Dutt) of the seedy joint wants them to become male escorts.

Without further ado, the 2 friends strip and dance for various groups of women, and become wildly popular as Rocco and Hunter (of course - what would the point of the movie be otherwise?). And then the inevitable happens - Radhika sees them on Youtube, and dumps Nick, Nick kicks Jerry out of the apartment, the nephew goes to a foster home - you get the gist.

At some point in the movie, the broke Jerry, who is also academically challenged, enrols himself in an Economics course at Trinity, Oxford, no less, for a period of 4 months (since he cannot fight for his nephew before that). His lecturer turns out to be an old classmate, Tanya Sharma (Chitrangada Singh), who breaks all the rules of teacher-student conduct with him (in one particular scene, in which Jerry crams for his exams, she offers to take off one piece of clothing for every answer that he can answer correctly).

The recession and its impact on Indians abroad could have made an interesting story, but Rohit Dhawan was too inspired by Deuce Bigalow Male Gigolo to take it seriously. In an effort to make people laugh, the director goes OTT with his take on homophobia and oversized people (sample this - when Tanya confesses that she had a crush on Jerry in college, he indicates that he would have never looked at her then because she was so fat).

Young Dhawan is obviously influenced by his father's politically incorrect humour of the '80s and the '90s, and even portrays the women as either manipulative, money-minded nags (Radhika) or immoral, frustrated, depraved femme fatales (Tanya).

The dialogues do not help, either. Some of the conversations in the film reek of amateur/intern screenwriting.

Akshay Kumar does what he has to, and he does turn on the charm once in a while. He is not at his comic best, however, although he delivers monologues on patriotism with a poker face. John Abraham's poker face, on the other hand, is not intentional. He looks good, and is very sincere, but there is nothing he can do about his lack of acting skills.

Deepika Padukone scowls and wears short, tight clothes. Chitrangada Singh tries too hard to come across as irresistible, and ends up looking rather desperate.

Sanjay Dutt and Anupam Kher provide some comic relief, but then again, their jokes are stale. The scene-stealer is Omi Vaidya in his Chatur Lingam-ish role. He is the only one who makes you laugh, and that is a blessing - till he makes an appearance, you find yourself wondering why this movie is supposed to be a comedy.

London has never looked so garish. A couple of scenes at what is shown as Brighton Pier may raise your hopes a bit, but do not be fooled - most scenes are indoors, and unappealing. Even scenes at Oxford are blink-and-miss. The less said about the rest of the costume designing, including costume, the better.

Pritam's music is, as usual, confusing, but rest assured, it will become an integral part of a club DJ's playlist. All the music channels play the songs all the time, anyway.

If you have absolutely no expectations, then watch Desi Boyz and whistle with the crowd when Sanjay Dutt makes an appearance. Our recommendation? Get home the Dostana and Deuce Bigalow Male Gigolo DVDs over the weekend.
Share. Save. Connect.
Tweet
DESI BOYZ SNAPSHOT

ADVERTISEMENT
This page was tagged for
Desi Boyz hindi movie
Desi Boyz reviews
release date
Akshay Kumar, John Abraham
theatres list
Follow @fullhyderabad
Follow fullhyd.com on
About Hyderabad
The Hyderabad Community
Improve fullhyd.com
More
Our Other Local Guides
Our other sites
© Copyright 1999-2009 LRR Technologies (Hyderabad), Pvt Ltd. All rights reserved. fullhyd, fullhyderabad, Welcome To The Neighbourhood are trademarks of LRR Technologies (Hyderabad) Pvt Ltd. The textual, graphic, audio and audiovisual material in this site is protected by copyright law. You may not copy, distribute, or use this material except as necessary for your personal, non-commercial use. Any trademarks are the properties of their respective owners. More on Hyderabad, India. Jobs in Hyderabad.