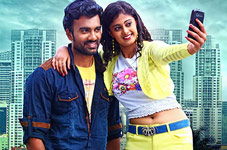 Ravi Kandala / fullhyd.com
EDITOR RATING
2.0
Performances
Script
Music/Soundtrack
Visuals
2.0
2.0
2.0
4.0
Suggestions
Can watch again
No
Good for kids
No
Good for dates
No
Wait to rent it
No
The truth, they say, will set you free. Amongst the following two statements, only one is true - and the true statement can surely set Director Prabhakar Reddy free. The statements are:

We say this because there is no way that a person who made the hilarious Prema Katha Chitram can make anything as horrendous as Anaganaga Oka Chitram.

Prabhakar Reddy's second directorial venture features a plot so outrageous that you'd be unable to make head or tail of it. The film's hero Siva (Siva) is a street vendor. He loves a girl Chitti (Meghasri), who's the grandchild of a debt-ridden old king. Chitti has never professed love for the hero but she has no qualms in asking him for obscene amounts of money. She does not do any work except walk around in pretty dresses giving speeches about positive living.

Siva has a friend who wants to direct movies. Siva takes up a job in a bar where he runs into a customer Rudra Pratap (Sayaji Shinde), who gives him a tip of Rs. 1 lakh every day for 12 days in a row. Siva and his friend then decide to kidnap this customer and demand a ransom of Rs. 3 crores so that they can produce their own movie.

They successfully kidnap Pratap, but then find out that he is the DGP of the state who's working undercover. They negotiate his release with the police and go to a jungle to release him. There they all get kidnapped by Maoists. Siva convinces the Maoists to produce a movie about their movement which he will direct, with the Maoists and tribals playing themselves. The Maoists agree to invest three crore rupees to produce this movie.

At this point in the film (which features two imaginary duets between the hero and the heroine while they are in captivity), we really lost track. This was followed by a speech by the Naxal leader about why they are fighting, then a speech by Chitti trying to reform the Naxals, and then a speech by Siva about why both the police and the Naxals should try peace for a while instead of pouncing on each other all the time. Some time travel later, the movie releases and becomes a hit, and Siva becomes a sought-after director (while the real director Prabhakar Reddy is now surely a pariah).

Anaganaga Oka Chitam seems almost like the result of some weird hallucinations that the director may have had. The plot moves from one topic to another with absolutely no connection. Chitti keeps asking Siva for lakhs and lakhs of rupees knowing fully well that he has no job or no means of earning. The DGP keeps drinking up full bottles of liquor every night and giving out exorbitant tips - no talk about where he's getting that money from or why he drinks himself senseless every night at the same bar. And we doubt if the Maoist movement is so well-funded that it can produce a movie worth three crores.

The acting is plain bizarre. Siva and Meghasri grate on the nerves with their voices and expressions. The supporting cast seem to know that they are in an abomination, and go through the motions. Except for one, all songs are shot in Georgia (which made us wonder how cheap it is to shoot in the country). The songs come at the most inopportune of times, and are painful to watch.

Anaganaga Oka Chitram is a weird film with no plot or rhyme. Stay far, far away from this one.
Share. Save. Connect.
Tweet
ANAGANAGA OKA CHITRAM SNAPSHOT 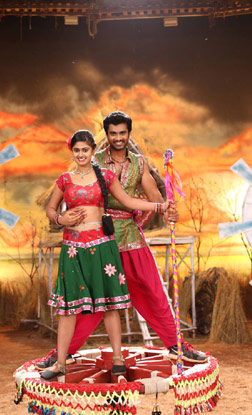 ADVERTISEMENT
This page was tagged for
Anaganaga Oka Chitram telugu movie
Anaganaga Oka Chitram reviews
release date
Siva, Megha Sri
theatres list
Follow @fullhyderabad
Follow fullhyd.com on
About Hyderabad
The Hyderabad Community
Improve fullhyd.com
More
Our Other Local Guides
Our other sites
© Copyright 1999-2009 LRR Technologies (Hyderabad), Pvt Ltd. All rights reserved. fullhyd, fullhyderabad, Welcome To The Neighbourhood are trademarks of LRR Technologies (Hyderabad) Pvt Ltd. The textual, graphic, audio and audiovisual material in this site is protected by copyright law. You may not copy, distribute, or use this material except as necessary for your personal, non-commercial use. Any trademarks are the properties of their respective owners. More on Hyderabad, India. Jobs in Hyderabad.