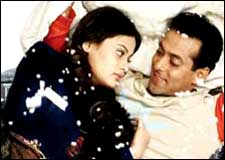 Ghazala Rizvi / fullhyd.com
EDITOR RATING
7.0
Performances
Script
Music/Soundtrack
Visuals
NA
NA
NA
NA
Suggestions
Can watch again
NA
Good for kids
NA
Good for dates
NA
Wait to rent it
NA
When Sneha signed up to become Lucky, she had no idea of the kind of demands that would be made on her mental faculties. And it was a good thing she didn't worry about that; Lucky absolutely absolves her of any acting requirements.

Lucky is a Sohail Khan production with debutante director duo Radhika Rao and Vinay Sapru, and is set in a troubled Eastern Europe country. Without wading into the murkier issues of the civil war, the movie creates an aura of a fairytale, with the romantic and majestic backdrop of St. Petersburg.

Once upon a routine morning, Lucky (Sneha Ullal) sets out for her school, only to be surprised by a sudden spate of compulsive violence by the rebels. She pants, runs, faints, runs, pants, and utters a few barely audible monosyllables. Caught unawares is also Aditya Sekri (Salman Khan), the suave and ingratiating son of the Indian ambassador in residence.

Fished in more severely by the smitten girl than by the Russian intelligentsia, Aditya slaves it out to save Lucky's hide. Many whimpering noises from Lucky later, we find Salman freezing it out through ambushes and icy wilderness.

Somewhere during their ordeal, they discover that love has intruded despite the turbulent times. I would have liked to add, despite the age difference, but the issue was given a silent burial with Aditya calling himself a budding youngster.

Mithun Chakraborty is Pindari Das Kapoor, a quirk of an intelligence officer with a knack for some on-the-spot guise changing hang-up. In his search for the missing duo, Pindari proves to be resourceful if highly uninteresting.

Sneha can't be accused of much, except looking like Aishwarya. She doesn't utter a complete sentence in the entire movie, so you can't even criticize her for presenting a dumb picture. When it comes to Salman, the self-confident one, the guy who thinks he's really IT, we are in different waters. Salman is still breaking the cardinal rule of aging, and looks stunningly mature and refreshingly good-humored in the movie.

Panoramic backdrops, gorgeous costumes and striking pastel shades make way for some divine tunes by Adnan Sami, like 'Jaan Meri Jaa Rahi Sanam', 'Sun Zara', 'Lucky Lips' and 'Chori-Chori'. And with real Russians and majestic opulence contrasting with the terrible depravity of the commoners, the fictitious country offers solace from the delusion of contentment that other movies set in foreign lands offer.

Lucky ends abruptly on a simper by Lucky, as Salman runs out of his life-saving wisecracks. The movie can't be blamed for having a lousy story, since there is no story to go by - but Salman Khan oozing out his magnetism will make a convert of you.
Share. Save. Connect.
Tweet
LUCKY SNAPSHOT

Movie is decent enough and good time pass... no great moments though. Better than lotz of junk that gets made.

ADVERTISEMENT
This page was tagged for
Lucky hindi movie
Lucky reviews
release date
Salman Khan, Sneha Ullal
theatres list
Follow @fullhyderabad
Follow fullhyd.com on
About Hyderabad
The Hyderabad Community
Improve fullhyd.com
More
Our Other Local Guides
Our other sites
© Copyright 1999-2009 LRR Technologies (Hyderabad), Pvt Ltd. All rights reserved. fullhyd, fullhyderabad, Welcome To The Neighbourhood are trademarks of LRR Technologies (Hyderabad) Pvt Ltd. The textual, graphic, audio and audiovisual material in this site is protected by copyright law. You may not copy, distribute, or use this material except as necessary for your personal, non-commercial use. Any trademarks are the properties of their respective owners. More on Hyderabad, India. Jobs in Hyderabad.