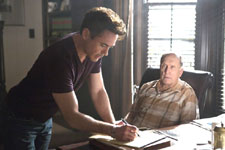 Nupur Barua / fullhyd.com
EDITOR RATING
6.0
Performances
Script
Music/Soundtrack
Visuals
7.0
4.0
6.0
7.0
Suggestions
Can watch again
Yes
Good for kids
No
Good for dates
Yes
Wait to rent it
No
Apparently, Jack Nicholson turned down the role of the judge in The Judge, for reasons best known to himself. His replacement, Robert Duvall, was born to play this role, and one wonders why the makers did not think of him earlier. He IS the Judge, and a fine one at that, evoking an emotional response in the audience, reasserting the fact that there is, indeed, magic in the movies.

Henry, a.k.a. Hank Palmer (Robert Downey Jr.), is a motor mouth lawyer in Chicago, who always defends the guilty, and wins. He is supremely self-confident, and arrogant. He has a few secrets, though - his wife slept with another man, and now a divorce is imminent, and he is perpetually haunted by his strained relationship with his father.

His father is Judge Joseph Palmer (Robert Duvall), a respectable man in the small town of Carlinville, Indiana. He is popular and known to be fair, but he treats Hank with contempt. When Joseph's wife dies, Hank flies out, alone, to attend the funeral. He reunites with his elder brother Glen (Vincent D'Onofrio) and younger brother, Dale (Jeremy Strong). Dale is somewhat slow-witted, and prefers filming everything he sees, to socialising.

As expected, Joseph is distant and formal with Hank, who cannot wait to leave. He bumps into his ex-girlfriend Samantha (Vera Farmiga), at a diner. He also makes out with a young bartender, Carla (Leighton Meester), at a bar. There is nothing to keep him in Carlinville, however, and he needs to get back to his complicated life in Chicago.

Fate, however, plays its hand, and Hank has to stay back. His father is accused of a hit-and-run, in which the victim, Blackwell (Mark Keily), is killed. Blackwell and the Judge have a history - the latter had sentenced Blackwell to 20 years in prison for the death of his girlfriend, and this case is considered a blot on Joseph's otherwise pristine career. Some people in the police department think that this was a deliberate murder, but Joseph cannot remember the incident. Hank is determined to prove his father's innocence, and in the process, revisits painful memories and the inevitable blame games.

The writers, Nick Schenk and Bill Dubuque, manage to keep the storyline interesting, despite the constant yo-yoing between genres - courtroom drama, father-son relationship drama, coming home drama, coming of age drama, lost love drama. There are too many things happening here. Yet, somehow, it is gripping, and told well. You, however, have to pay strict attention to every little detail to make sure that you understand the broader story.

To be fair, what stands out is the relationship between Hank and the Judge. Hank goes from a self-centred, smug man to an insecure, emotional son. The Judge does not change much over the course of the story, and you can understand why his sons and the rest of the community are in awe of him. He is a righteous man, who believes that his actions are justified, but he, too, learns to appreciate his son, even if only a little.

From Hank's point of view, his father is a hypocrite, because he presents his best side to the rest of the community, and his worst to his sons. This dichotomy is beyond his comprehension, and he cannot understand why his father is so stubborn. In fact, the Judge never admits to his own shortcomings, but Hank, once he discovers how flawed his father actually is, finds his own resentment ebbing.

Everything else that happens in the screenplay, including Hank's reconnection with Samantha, is not given as much importance. The emotions are kept in check, and the humour is unexpected. The dialogues are realistic, delivered in a matter-of-fact manner, and the events are not overly dramatic.

This movie belongs to both the Roberts. This is one of Robert Duvall's best roles yet. Despite his playing the irascible old man who is too obstinate and almost idealistic, you find yourself rooting for him. Robert Downey Jr. is still in Iron Man mode, but he slowly transforms himself into this vulnerable son with whom you can identify quite easily - after all, we all want to impress our parents, and the lack of appreciation can make all our achievements seem hollow. Watch out for the sequences in which Robert Downey Jr. holds back his tears, as if surprised that he is capable of such emotions.

Vincent D'Onofrio is the loser son, who could have done much better in life. He is not resentful, but accepting, and the way he plays his part is commendable. Jeremy Strong is convincing as the helpless younger brother. Billy Bob Thornton is rather tame in this film. And Vera Farmiga is perfect as the independent single mother, who will not let her feelings for Hank come in the way of her existence.

The film is shot in Massachusetts, and the production design brings alive the fictional town of Carlinville. Nothing is too dramatic, but neither is anything too realistic. The costumes are appropriate, and not too flashy. The camera work includes some unusual angles to establish locations and scenes, and is quite faithful to the authenticity of the production design. The music is touching in parts, but not too intrusive. At about 145 minutes this is a lengthy movie, and the editing department could have cut down on some of the retrospective scenes to make it go quicker.

Watch The Judge for the performances. The story, for once, is secondary. You no longer care, after a point, about where the plots are headed, or what the resolution will be, but you will invest heavily in the characters, and relate to them. Roberty Downey Jr., in his tweet, said that this was the movie that he had always wanted to make. His wife, Susan Downey, is one of the producers, and we hope that the couple makes more of such films.
Share. Save. Connect.
Tweet
THE JUDGE SNAPSHOT 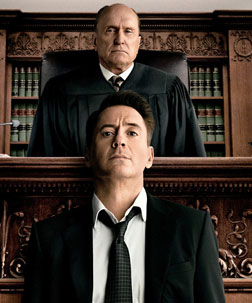 ADVERTISEMENT
This page was tagged for
The Judge english movie
The Judge reviews
release date
Robert Downey Jr., Robert Duvall
theatres list
Follow @fullhyderabad
Follow fullhyd.com on
About Hyderabad
The Hyderabad Community
Improve fullhyd.com
More
Our Other Local Guides
Our other sites
© Copyright 1999-2009 LRR Technologies (Hyderabad), Pvt Ltd. All rights reserved. fullhyd, fullhyderabad, Welcome To The Neighbourhood are trademarks of LRR Technologies (Hyderabad) Pvt Ltd. The textual, graphic, audio and audiovisual material in this site is protected by copyright law. You may not copy, distribute, or use this material except as necessary for your personal, non-commercial use. Any trademarks are the properties of their respective owners. More on Hyderabad, India. Jobs in Hyderabad.