Guts, gore and glory - this flick claims to have 'em all. The Scorpion King, if you remember, was depicted as an ancient day Faust in that forgettable movie The Mummy Returns, having sold his soul to the horrible jackal-headed god Anubis for his help. He returns here with one whole movie to himself, but this time as the good guy, who saves the world from the evil designs of the warlord-king Memnon (Steven Brand). Hurrah! 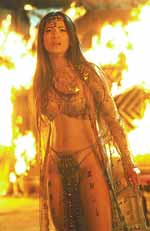 Assassin to king... the plot ain't exactly very new. It's actually a few thousand years old! Schwarzenneger tried it in the Conan series. The Rock gives it a shot here. What he has to give him an edge is an awesome effects team, some tight direction, some well-choreographed action sequences, and, perhaps most importantly, a hot lady on his arm (Kelly Hu). To top it all, the lady is a sorceress who has visions of the future, subject to the maintenance of her virginity! Now we are talking!

Mathayus (The Rock) is an assassin by profession who hails from a tribe of professional assassins (now we understand the 'Jackal' part). He is paid to assassinate Memnon's sorcerer, who is the main reason for his success so far. Our assassin gets there to find he has been betrayed, as the rest of his team perishes to arrows, and he, to one look of the sorcerer... er, sorceress. He is caught, but the sorceress saves him, stating Rule 241 of the Magical Guidebook to executing assassins. 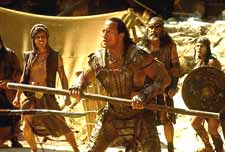 Now, the guy has a brother to avenge, a despot to kill and a maiden to carry away. The rest of the movie is basically, item one... check. Item two... check. Item three... wow! Now that's an item!

One sardonic raised eyebrow, a grimace each time he grunts out a word (most of them as profound as 'yes') and a frame that casts no doubt that he is indeed capable of reducing entire armies to pulp, The Rock sure makes a hot Scorpion King. Where our monolith scores over Arnie is his timing, which is impeccable. One particular 'boo' right in the beginning of the flick was a scream.

With Oriental strains at times and the unmistakable riffs of an electric base guitar at others, the music keeps up with the tempo the movie sets. The fights are well executed, and the straining muscles, the clash of metal and the sheer violence of the blows make sure you stay engrossed. The hollowness of the plot does get through at times when you recover, albeit a li'l dazed, from the heat of the battle, but then there is the enchanting sorceress to take your mind right off trivial matters.

ADVERTISEMENT
This page was tagged for
scorpionking4moviedownloadinhindi
https://movies.fullhyderabad.com/the-scorpion-king-hindi/hindi/the-scorpion-king-hindi-movie-reviews-150-2.html
the Scorpio king Hindi dubbed Hollywood full movie
the scorpion king all parts in hindi download
The scorpion king in hindi doenlod
Follow @fullhyderabad
Follow fullhyd.com on
About Hyderabad
The Hyderabad Community
Improve fullhyd.com
More
Our Other Local Guides
Our other sites
© Copyright 1999-2009 LRR Technologies (Hyderabad), Pvt Ltd. All rights reserved. fullhyd, fullhyderabad, Welcome To The Neighbourhood are trademarks of LRR Technologies (Hyderabad) Pvt Ltd. The textual, graphic, audio and audiovisual material in this site is protected by copyright law. You may not copy, distribute, or use this material except as necessary for your personal, non-commercial use. Any trademarks are the properties of their respective owners. More on Hyderabad, India. Jobs in Hyderabad.