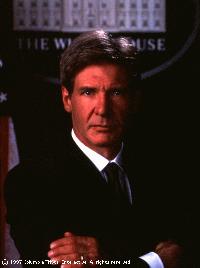 Pratima Agnihotri / fullhyd.com
EDITOR RATING
7.0
Performances
Script
Music/Soundtrack
Visuals
NA
NA
NA
NA
Suggestions
Can watch again
NA
Good for kids
NA
Good for dates
NA
Wait for OTT
NA
The Cold War still chills many an imagination. Want proof? Watch Peterson's sleek, action-packed political thriller, Air Force One. It proves beyond doubt how the one and only super cop of the contemporary world is damn good at teaching a thing or two, in a wholesome American way, to the terrorists. Incidentally, this time round they hail from the disintegrated USSR. Thereby, the good Yankee, the US President, the hero of the movie, gets a chance up there in the air to prove the forever-imminent American destiny to be the leading light of the world.

The President, if this film is any proof, has a real handful of assorted jobs. He has to go to Kazhakistan, liberally share a piece of his mind with the international terrorists there at a State Dinner, get his plane hijacked thanks to the tacit co-operation of the not-so-unwilling local authorities. And then, at an altitude of 30,000 feet, put up the Rambo act, padded with Tarzan antics, saving his family and the nation and, not to forget, the rest of the world, from evil-minded Russian terrorists.

They keep on reminding his impressionable teenage daughter how her Papa, too, killed millions in the name of an honorable war. All the while, down there on terra firma, there are any number of Brutuses, from his own and the Opposition party, using this as a godsend opportunity to snip off his chances at a second run.

Air Force One - as general knowledge garnered through the very many game shows doing our channels proud can tell you - is the presidential airbus. Fitted with every possible means of communication, its censors cannot fathom how arms get smuggled up there on board. With the tacit connivance of the evil locals, the terrorists get in, posing as journalists. Once airborne, they break cover and all hell is let loose.

The President is whisked away in the engine area. But the nice all-American fella that he is, he manages to escape and "guide" the plane to safety. It is indeed worth a watch to find out how the man does it, because you get, in the process, a thrill a minute till you almost fall off the chair, your knuckles all white.

You can recognize so many real life parallels, too. The spunky First Lady, the loving daughter of the First couple, the all efficient Lady Vice President, the evil President baiters - the real works, in short. The real strength of Air Force one is its picturization. Though the story line is the type that should shoot in a thousand desi versions, it is the convincing treatment that is appealing. Of course, you should not ask scientific questions about the air pressure et al. After all, a mainstream film is the willing suspension (from the heavens) of disbelief, right?

The other noteworthy factor is the acting. The other not so known actors/actresses ably support Harrison Ford, at his action best, here. The music, especially L'Internationale with a hint of the Ninth Symphony, is very effective. A feel-good watch, in brief, which entertains you while educating you about the evils of terrorism.
Share. Save. Connect.
Tweet
AIR FORCE ONE SNAPSHOT

ADVERTISEMENT
This page was tagged for
Air Force One english movie
Air Force One reviews
release date
Harrison Ford, Garry Goldman
theatres list
Follow @fullhyderabad
Follow fullhyd.com on
About Hyderabad
The Hyderabad Community
Improve fullhyd.com
More
Our Other Local Guides
Our other sites
© Copyright 1999-2009 LRR Technologies (Hyderabad), Pvt Ltd. All rights reserved. fullhyd, fullhyderabad, Welcome To The Neighbourhood are trademarks of LRR Technologies (Hyderabad) Pvt Ltd. The textual, graphic, audio and audiovisual material in this site is protected by copyright law. You may not copy, distribute, or use this material except as necessary for your personal, non-commercial use. Any trademarks are the properties of their respective owners. More on Hyderabad, India. Jobs in Hyderabad.