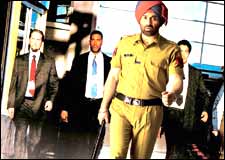 Ghazala Rizvi / fullhyd.com
EDITOR RATING
5.0
Performances
Script
Music/Soundtrack
Visuals
NA
NA
NA
NA
Suggestions
Can watch again
NA
Good for kids
NA
Good for dates
NA
Wait for OTT
NA
What could be worse than watching a Jat try his hand at being cute? Seeing him try his hand at being witty. Jo Bole So Nihaal may be a serious affair for some particular sect of the Indian intelligentsia, but it's pure sham for the rest of us. The attempted badinage falls flat on its own face and comes a cropper. If growing a humorous arm was as easy as growing a beard, everyday would've been Thanksgiving for Sunny Deol.

The movie has him trying to master the oxymoronic feat of acting simultaneously being a lovable Jat and a ferocious warrior on a mission. Failing both, he manages to get across only with sheer buffoonery. At best, he appears to be going on a downhill journey in his transitional phase from his days of being a power-Sikh in Border and Gadar.

The film has an atypical opening; Romeo (Kamal Khan) is the guilt-ridden super killer. Super, because he kills with panache, and guilt-ridden because he is obsessed with the confession box. His repertoire of guilt includes managing bomb blasts across the world on weekdays and, for a break, killing the priests of the local parishes on Sundays.

For a man who sports a pet chameleon, a boa and an equally venomous girlfriend, Lisa (Nupur Mehta), Romeo looks dumbstruck. Blue eyes or not, this Khan may look stunning in a clothes ad or walking down the street to retrieve his daily milk-bottle, or even simply having a mundane lunch at a cheap deli, but not as a classy masochist who enjoys pain. Kamal Khan, with a diction as devoid of inflection as his face is of expression, has performed to pathetic heights in the movie.

Romeo is commissioned for carrying out terrorist activities in Punjab, and comes across Punjab Police beat cop, Nihaal (Sunny Deol), on a Sunday, his weekly confession day. With some effort, which reveals his own IQ, Romeo manages to wriggle out of Nihaal's hands. Nihaal is branded a traitor, and he vows to take revenge - and he... well, he sits around and waits.

The FBI are a little quicker in action, if not more intelligent. They trace Nihaal and recruit him for 'Operation Romeo'. Nihaal wrecks more havoc in New York than Romeo's bombs could ever do, with his clichéd jokes and random war cries.

Stripped of all appearances of logic, the movie meanders through the by-lanes of New York, proving repeatedly that either the FBI or the Indian moviemakers are a team of clumsy oafs. Nihaal is rebranded as a traitor when he tries to sneak Romeo back to India.

With some help from FBI special agent Satendra (Shilpi Mudgal), especially on the human anatomy, Nihaal is able to uphold his Jat honor and return home triumphantly.

Jo Bole So Nihaal is packed with some power singing by Sukwinder and Sunidhi Chauhan, but all the songs appear to be just part-versions of perhaps one core song tuned by Anand Raj Anaand. With your turbans on, you can classify the movie as entertainment, and if you are from the land of five rivers, even as wholesome entertainment.
Share. Save. Connect.
Tweet
JO BOLE SO NIHAAL SNAPSHOT

ADVERTISEMENT
This page was tagged for
Jo Bole So Nihaal hindi movie
Jo Bole So Nihaal reviews
release date
Sunny Deol, Kamaal Khan
theatres list
Follow @fullhyderabad
Follow fullhyd.com on
About Hyderabad
The Hyderabad Community
Improve fullhyd.com
More
Our Other Local Guides
Our other sites
© Copyright 1999-2009 LRR Technologies (Hyderabad), Pvt Ltd. All rights reserved. fullhyd, fullhyderabad, Welcome To The Neighbourhood are trademarks of LRR Technologies (Hyderabad) Pvt Ltd. The textual, graphic, audio and audiovisual material in this site is protected by copyright law. You may not copy, distribute, or use this material except as necessary for your personal, non-commercial use. Any trademarks are the properties of their respective owners. More on Hyderabad, India. Jobs in Hyderabad.