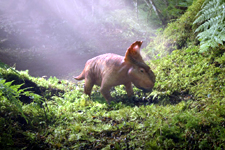 Nupur Barua / fullhyd.com
EDITOR RATING
5.0
Performances
Script
Music/Soundtrack
Visuals
5.0
5.0
6.0
7.0
Suggestions
Can watch again
No
Good for kids
Yes
Good for dates
No
Wait for OTT
Yes
Dinosaurs are scary, thanks largely to Jurassic Park, but they are also extinct, so that is a relief. There are so many theories and legends about those magnificent creatures and their eventual disappearance that one never really knows where to begin, especially when it comes to explaining to young, curious minds. Which is why the BBC mini-series, Walking With Dinosaurs, was such a hit. The movie, however, despite the same title, is another story altogether, literally.

Ricky (Charlie Rowe) and his sister Jade (Angourie Rice) are spending some time with their palaeontologist uncle, Zack (Karl Urban). Ricky is no longer interested in digging up for fossils, even when his uncle shows him the tooth he found. So he decides to wait near the vehicle while his uncle and sister go hunting for more bones, and is shocked when a black raven begins to speak with him.

The bird tells Ricky a story. About 70 million years ago, the Alexonis bird, Alex (John Leguizamo), was best friends with a Pachyrhinosaurus named Patchi (Justin Long), the runt of the litter with a hole in his head. Patchi and his brother Scowler (Skyler Stone) grow up in a herd, and their father is the leader.

Patchi meets with Juniper (Tiya Sircar) near a watering hole, and is instantly in love. When all the animals and birds migrate to the south for the winter, Patchi and Juniper go through a series of adventures when they are separated from the herd, but they are soon reunited with their families.

Patchi's biggest challenge, however, is yet to arrive, and it involves his brother. Through it all, Alex advises and guides the young Patchi over the years.

The script is tepid, in terms of story progression. There is nothing much that happens except the constant shifting of the herds from the south to the north and back again. The few misadventures that the main characters face are not the adrenaline-pumping kind, and the relationships are not intense enough. In fact, even the emotional moments are of the half-hearted variety. It is a classic narrative of the underdog, but not one you can identify with (which is what most underdog movies aim to do).

As far as cinematography is concerned, it is shot more like a documentary than a feature film - which is not surprising, given the inspiration. The matter-fact-tone spills into the storytelling, the production design, the dialogues, and the editing.

The music is above average, but does not do much to salvage the dryness in a film that is essentially about triumphing over all odds.

The voices of the actors do little to the characters. Alex has a marked Latin-American accent, thanks to John Leguizamo's nasal twang, but the others do not leave much of a mark. Even the human characters, played by three actors, seem more amused at the thought of the movie than actually contributing to a more realistic portrayal of their roles.

Yet, Walking With Dinosaurs is not a disappointment, despite everything. Kids may still love the idea of a simple story (even if not very well-told), and may learn about the various types of dinosaurs (thanks to the labelling inserted with the introduction of each new creature). Also, it is a better alternative to the other animation movie this week - Mahabharat. However, the lack of soul may make it a forgettable film, and that may work against the intentions of the makers.
Share. Save. Connect.
Tweet
WALKING WITH DINOSAURS (3D) SNAPSHOT 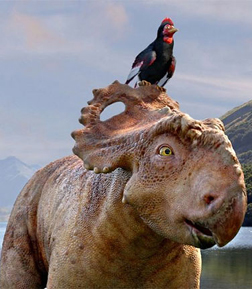 ADVERTISEMENT
This page was tagged for
Walking With Dinosaurs (3D) english movie
Walking With Dinosaurs (3D) reviews
release date
Charlie Rowe - Ricky (voice), Karl Urban - Uncle Zack (voice)
theatres list
Follow @fullhyderabad
Follow fullhyd.com on
About Hyderabad
The Hyderabad Community
Improve fullhyd.com
More
Our Other Local Guides
Our other sites
© Copyright 1999-2009 LRR Technologies (Hyderabad), Pvt Ltd. All rights reserved. fullhyd, fullhyderabad, Welcome To The Neighbourhood are trademarks of LRR Technologies (Hyderabad) Pvt Ltd. The textual, graphic, audio and audiovisual material in this site is protected by copyright law. You may not copy, distribute, or use this material except as necessary for your personal, non-commercial use. Any trademarks are the properties of their respective owners. More on Hyderabad, India. Jobs in Hyderabad.