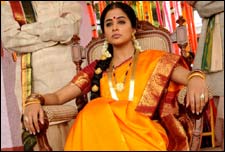 This is a low-budget film in which Priyamani gets to be an Arundhati, "Kick" Shaam gets to dance in foreign locales in cycling shorts (or something very similar) with a formerly-A-lister actress, Jagapathi Babu gets to be a benevolent leader-of-the-masses, Brahmaji gets to be an SP, and you get to sit and weep. You get the idea.

The movie starts with Chakri (Shaam) and Sohini (Priyamani) playing inane pranks on people, and also getting tensed about whether their romance will have parental approval. Sohini is from a north-Indian family, and that means that people in her family speak in Hindi - the broken kind that we Telugus speak in to our Delhi brethren and get called Madrasis and other sundry names in return. Chakri, on the other hand, is from a royal Rayalaseema family.

They do get married quickly, fortunately. But strange things start to happen.

The day immediately after their wedding, Chakri asks Sohini to dress up as his dead peddamma in order to play a prank on his dad (don't ask). Now when Sohini dresses up like her, she turns into a possessed woman, and kills the dad.

As the flashback tells us, Sohini was possessed by the soul of Lakshmi (Priyamani), who lived extremely long ago. Lakshmi was the wife of a revered leader called Narasimha (Jagapathi Babu). This couple was tragically killed by their own relatives before they could complete an important task, and this is why Lakshmi is back from the dead.

The okayish script could have shone in the hands of a better director, but Kshetram is quite a bad product. First up, the sequences in the beginning, with Priyamani, Shaam and their families, are so badly written and directed they're an embarrassment to watch.

Then, the scenes in which Sohini gets possessed are completely wannabe. The suspense is yawn-worthy, too.

After this is done, the flashback plays out laboriously, for a full 56,734 minutes, in which the only people who make an impact are the women - Annapoorna and the melodramatic Siva Parvathi.

The drama itself is weak and predictable, until the ending, which is pretty much unbelievable.

The handlebar mustache suits Jagapathi Babu more than the character does, but it's nice to see him in a dignified role after long. As for Priyamani, she must look for seriously better work if she wants to stay in the game.

The rest of the actors, except for the actresses we named above, are unconvincing. It was a bad decision to cast Aditya Menon in the role of Chakri's father - he just doesn't look the part. Shaam is saddled with bad dubbing, as usual, but he is not around for too long, so it doesn't hurt much. The comedy by Brahmanandam and Uttej just doesn't take off.

Save for Jagapathi's crisp white clothes, the whole movie - right from the sarees (which aren't even nicely draped) Priyamani wears - has a B-grade look. Koti's music, too.

Overall, it's a bad idea to think of Kshetram for your movie outing. Stay away.
Share. Save. Connect.
Tweet
KSHETRAM SNAPSHOT

ADVERTISEMENT
This page was tagged for
kshetram telugu movie
Kshetram telugu movie
Kshetram reviews
release date
Jagapathi Babu, Priyamani
Follow @fullhyderabad
Follow fullhyd.com on
About Hyderabad
The Hyderabad Community
Improve fullhyd.com
More
Our Other Local Guides
Our other sites
© Copyright 1999-2009 LRR Technologies (Hyderabad), Pvt Ltd. All rights reserved. fullhyd, fullhyderabad, Welcome To The Neighbourhood are trademarks of LRR Technologies (Hyderabad) Pvt Ltd. The textual, graphic, audio and audiovisual material in this site is protected by copyright law. You may not copy, distribute, or use this material except as necessary for your personal, non-commercial use. Any trademarks are the properties of their respective owners. More on Hyderabad, India. Jobs in Hyderabad.