The Mistress Of Spices Review 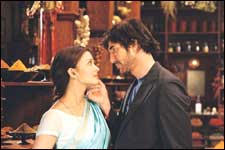 Mistress of Spices, an adaptation of Chitra Banerjee Divakaruni's novel, offers itself as an "immigrant's tale". Tilo, a spice seller (Aishwarya Rai), is not just an Indian in America but also a spice-mistress belonging to a bewitched island, far far away.

A neglected girl child, Tilo (name derived from til) quickly realizes her divine peculiarities. She can peephole both into the past and the future. Covetous bandits hankering after her prophetic powers, run her out of her hometown and the waves ship poor Tilo to the Island of the Spices.

Here Tilo joins the sisterhood (feminists! alert!) and memorises the new alphabet. A is for amchur and Z is for zafran. Head spice-mistress, Mother (Zohra Sehgal), forewarns the girls about messing with the spice rules. But then this condition - baazi - we all recognize. Every Grimms Brothers' Cinderella has a "must be gone before gong" malady. Three diktats Tilo must obey. No touching another's skin, no stepping out of the spice store, and no using of spices for herself. Each spice mistress chooses some pocket of the world and provides succor to bummed out individuals.

Tilo's Spice Bazaar is the stage for most of the action. It's a quaint shop, alive with spices huddled together.

1. Haroun (Nitin Ganatra), the cabbie, is a regular chat up friend. Kala zeera keeps him going.
2. Dadaji (Anupam Kher), the grumpy grandpa, is distressed with his granddaughter Geeta's firangi mannerisms. He tries umpteen spices whose names I can't recollect.
3. Jagjit, Mr. Lonely, has no friends at school 'coz he's different; he wears a pagdi. Cinnamon is his spice.
4. There's an Afro-American hottie who gets regular doses of some aphrosidiac or the other.

Tilo whisks out everything from saffron to basil for these people who are alienated from nation, family, lover. She talks to her spices, and the spices sustain her powers.

But the calm is disrupted when Doug atop a Harley (Dylan McDermott) gate-crashes into her life. Skipping all the post-colonial jargon, an Indian woman picks a white Prince Charming. (Reality check: all the Charmings are alabaster white, except for good ol' green Shrek).

Red chillies set the sirens blaring. Tilo has only to fantasise about love, and the chillies get all hot and flustered. Doug touches her, then takes her out to San Francisco, and the spices do a deadly turn-around. The spices that were balm for the broken, chasten Tilo by punishing her customers.

What does Tilo do? Does her fate lie with the spices or with Doug? Does magic realism have space for loverboy?

The movie possesses lyricism, but without a pulse. Aishwarya's patent half-stunned, quarter-coy and quarter-vacant expression stays with her. This is not Ash-bashing, merely Ash-habituation. In all fairness, there are bits when she's emotive yet enigmatic. She comes alive when with Dylan McDermott, though they're not exactly heating up the screen. Anupam Kher's a cute Grandpa and Nitin Ganatra portrays the displaced Kashmiri Indian covering all the nuances.

The mysticism of the movie comes about with the palette of colours splashed across the screen. Cinematographer Santosh Sivan does not merely use color, but also a hovering shade that dims the sharp yellow of haldi and the cheeky red of lal mirch. Stereotypically Oriental, but it works.

ADVERTISEMENT
This page was tagged for
mistress of spices movie review
The Mistress Of Spices english movie
The Mistress Of Spices reviews
release date
Aishwarya Rai, Dylan McDermott
Follow @fullhyderabad
Follow fullhyd.com on
About Hyderabad
The Hyderabad Community
Improve fullhyd.com
More
Our Other Local Guides
Our other sites
© Copyright 1999-2009 LRR Technologies (Hyderabad), Pvt Ltd. All rights reserved. fullhyd, fullhyderabad, Welcome To The Neighbourhood are trademarks of LRR Technologies (Hyderabad) Pvt Ltd. The textual, graphic, audio and audiovisual material in this site is protected by copyright law. You may not copy, distribute, or use this material except as necessary for your personal, non-commercial use. Any trademarks are the properties of their respective owners. More on Hyderabad, India. Jobs in Hyderabad.