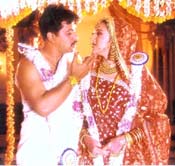 E M Bhargava / fullhyd.com
EDITOR RATING
3.0
Performances
Script
Music/Soundtrack
Visuals
NA
NA
NA
NA
Suggestions
Can watch again
NA
Good for kids
NA
Good for dates
NA
Wait for OTT
NA
I first learned the concepts of non-violence in my marriage, said Gandhiji. It wouldn't be tough for you to get convinced after this flick that Arjun would not see eye to eye with the father. Firstly, father didn't have an action king image to live up to. Secondly, father didn't have a marriage and a movie to save - it was just a nation. Thirdly, father didn't have to do anything dramatic to attract audiences - they were willing to pay with their lives for him, which, you'll agree, are worth more than Rs. 25 apiece.

And so, this tale of dealing with marital discord has Arjun demonstrating a lot of the concepts of violence in a bid to give shape to his idea of pragmatic filmmaking. My fans come to see me fight, okay?

To Ladies And Gentlemen begins with Vijay (Arjun) displaying his karate skills (actually an overkill in this context) in Vizag to save Sanjay (Vineeth) from a bunch of goons. To show his gratitude, Sanjay asks Vijay to stay at his home for a few days (Vijay is on his way to his home in Hyderabad from Vizag).

Here Vijay comes to know about the quarrel between Sanjay and his wife Anita over a very trivial issue that results in the couple trying to get divorced. Now the Indian Penal Code demands that couples should live together for at least one year after marriage before they can appear in the court for a divorce, and so the couple is very eagerly awaiting the completion of one year of their marriage, so they can go their separate ways.

This is where Vijay decides to step in, and with the help of Govindaswamy (Goundamani), Sanjay's friend-cum-servant, tries to set things right. This he does by telling the couple about his own love story with Sita (Sakshi) and how they got married, and explains to them how sacred the relationship of a husband and wife is. Several supposedly ideal couples are brought in to illustrate the point that Vijay is trying to make. And several inane fight sequences and emotional scenes later, the couple discover their love for each other.

Unwittingly, Govindaswami comes to know that Vijay was in fact unmarried and had lost his love in an accident on the day of his marriage, and that the whole love story of his was just a figment of his imagination that was aimed at bringing Sanjay and Anita together. The movie ends with Vijay extracting a promise from Govindswami that the secret will be never revealed, and then riding away into the proverbial sunset.

To begin with, this film is a dubbed version of a Tamil movie, and the dubbing job is plain bad. Then, the director Arjun tries to put forth a much beaten topic, that of the sacredness of marriage, differently, but that's too much of a challenge for him. And like we said, he seems to be more concerned about his action king image and keeps beating up baddies who appear needlessly. With the thin storyline the movie has to rely majorly on screenplay, which is insufficient here to save it. The saving grace is the picturization of the songs, with some very good locations being brought in to use.

With Sakshi playing her role of wallflower to perfection, Vineeth doing his regular job of a loser and Arjun just flexing his muscles, the performances are best forgotten. The comedy, but for few jarring and irritating moments, is okay, though, with Goundamani doing a decent job.

The music director seems to have a lot of belief in the law of averages - he's put in as many songs as possible hoping that at least a few will turn out well. Well, the law has betrayed him. There is also a very bad and unnecessary rip-off of the video of the latest hit single of Bon Jovi, "It's My Life".

You'll feel like doing a lot of bashing up yourself after watching this, so stay away and stay safe.
Share. Save. Connect.
Tweet
LADIES AND GENTLEMEN SNAPSHOT

ADVERTISEMENT
This page was tagged for
ladies and gentlemen 2001 tamil movie story
Ladies And Gentlemen telugu movie
Ladies And Gentlemen reviews
release date
Arjun Sarja, Goundamani
Follow @fullhyderabad
Follow fullhyd.com on
About Hyderabad
The Hyderabad Community
Improve fullhyd.com
More
Our Other Local Guides
Our other sites
© Copyright 1999-2009 LRR Technologies (Hyderabad), Pvt Ltd. All rights reserved. fullhyd, fullhyderabad, Welcome To The Neighbourhood are trademarks of LRR Technologies (Hyderabad) Pvt Ltd. The textual, graphic, audio and audiovisual material in this site is protected by copyright law. You may not copy, distribute, or use this material except as necessary for your personal, non-commercial use. Any trademarks are the properties of their respective owners. More on Hyderabad, India. Jobs in Hyderabad.