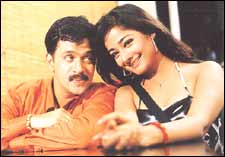 What can I say that'll actually make you want to go and watch this film? Quite a bit actually - if I said it was really good, must-see, or unmissable, you just might be curious. Go and see it even - who knows! But I'm not doing my kartavyam then, am I? How will Assistant Commissioner Parashuram ever forgive me?

If you've had a look at the credits, you might wonder whether there are any women in the flick, and this might have a huge bearing on whether or not you go for the movie. The on-screen credits said there was only one actor in the film - "Action King Arjun". I knew half the film by then. If I tell you it's about youth being lured into terrorism, voila! You know the rest now, don't you? I could stop right here and everyone's happy. But ACP Parashuram might scream "Oraaaaiiii!" and kick some butt in my dreams tonight, and I'm shakin' scared it might be mine, if I don't do my kartavyam. So here goes. 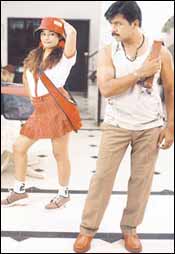 Arjun is ACP Parashuram. Oh, you got that already? We have a smart audience tonight! Anyway, he's worried about one guy Akash, who's tricking young, jobless, frustrated youth into becoming terrorists and human bombs and the like. The thing is - nobody's seen Akash, who works through instigatory audio tapes, and this makes things tougher for supercop. Parry boy goes about in his own Parry-land... la la la... doing his Parry thing... la la la... You know, kick some ass here, kiss the girls there.

Then he comes across Siva (Abbas) in a canteen. Siva is a poor student working so that he can study electrical engineering. Parashuram takes him under his wing to help him out. As the tisht in the tale unfolds, we are introduced to Akash, played by the really good Rahul Dev. Through spying and counter-spying, it finally comes to a one-on-one showdown between Parashuram and Akash. This leads to a decent, not overly melodramatic or speech-filled ending. 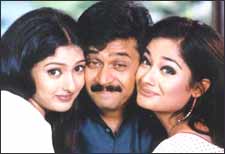 Which brings me to the 'music'. Apparently, it's A R Rahman's work. Apart from the recognizably Rahman-ish background wail of "Parashuraaaaaam" which crops up every so often, and the background score, nothing else is worth two bits. The inspiration for the rest of the 'music' may well have been a bunch of enthusiastic 6-year-olds locked in a music instrument shop. Hell, I almost wept when I heard a direct lift of Rammstein's "Du Hast" in the background score! The dancing, especially Arjun's, looks more like they are trying to put out some errant firecrackers. 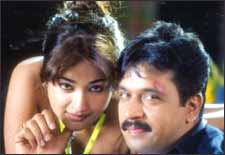 ADVERTISEMENT
This page was tagged for
Police Kartavyam telugu movie
Police Kartavyam reviews
release date
Arjun, Kiran
theatres list
Follow @fullhyderabad
Follow fullhyd.com on
About Hyderabad
The Hyderabad Community
Improve fullhyd.com
More
Our Other Local Guides
Our other sites
© Copyright 1999-2009 LRR Technologies (Hyderabad), Pvt Ltd. All rights reserved. fullhyd, fullhyderabad, Welcome To The Neighbourhood are trademarks of LRR Technologies (Hyderabad) Pvt Ltd. The textual, graphic, audio and audiovisual material in this site is protected by copyright law. You may not copy, distribute, or use this material except as necessary for your personal, non-commercial use. Any trademarks are the properties of their respective owners. More on Hyderabad, India. Jobs in Hyderabad.