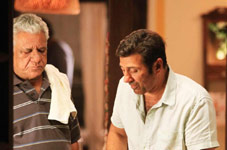 Josh / fullhyd.com
EDITOR RATING
5.5
Performances
Script
Music/Soundtrack
Visuals
7.0
6.0
6.0
7.0
Suggestions
Can watch again
No
Good for kids
No
Good for dates
Yes
Wait to rent it
No
Ghayal Once Again is so uniquely uncharacteristic that you can't seem to find similar references. On the surface, it is all too familiar. Ajay Mehra (Sunny Deol), after his (well-known) past, undergoes mental trauma due to the loss of his family. Successfully rehabilitated by Dr Rhea (Soha Ali Khan), he starts up an investigative journalism collective called Satyakaam, which also delivers justice in hidden ways.

Four brave teenagers (who live to exemplify the maxim that there's a thin line between bravery and foolishness) get in possession of videographic evidence which incriminates Kabir Bansal, the son of India's richest man Raj Bansal (Narendra Jha in great form). The Bansals start scanning Mumbai and hounding the kids, who reach out to Ajay Mehra. Mehra, of course, sets out to deliver justice.

That is what makes you think it is a regular enough Sunny Deol film with a lot of action, drama and all the other staples. What is entirely irregular and most intriguing is the treatment these staples receive. Deol (now also director and writer) doesn't seem to be trying to make a quick buck off his popularity. He wants to be a functioning writer and director, and the results, while middling, are quite full of surprise.

For instance, he gives his characters some definition. Raj Bansal isn't a happy evil villain generally murdering off people like he doesn't care. He is in fact appalled by his son's rage, and his wife (Tisca Chopra) squarely blames him for the undisciplined upbringing. They still protect him, but now you know the villain is a defined human character. A fact that Jha and Chopra make good use of.

And take the chases in the first half. They are pretty tense and elaborate material. It's all too easy for the director to give in to the temptation of losing no time in unleashing the hero. But no, here the chase goes on for a long while without a whiff of Sunny Deol in it. The director is keen on building tension, and he succeeds. The score has that quality of escalating throughout without fully getting too distracting. The editing gives a sense of real-time with the pace. All of this effectively sets the stage for the obvious entry of Deol at the life-saving moment.

It is here that we notice the trouble with Ghayal Once Again. A hero-based mass-pulling film needs to deliver its star. That happens by establishing trouble, letting it grow on your nerves, maybe make you squeal a bit, and then have the hero get a swashbuckling entry so he can redeem everything. The film absolutely succeeds in setting the stage for its hero, but forgets to deliver the hero in the prescribed quantities.

There is very little of Sunny Deol, the star, in Ghayal Once Again. Deol, the director, put in so much effort into understatement, he seems to have forgotten what people would come to the film for. There is very little to clap or whistle at. All the pent-up energy goes nowhere when Deol summarily turns up, thrashes the goons and takes the kids to safety like he was collecting milk packets at the grocer's. Where are the goosebumps? Where is the cathartic release of all the anger and anxiety?

It gets even more troublesome in the third act. The movie suddenly jumps to melodrama. It isn't badly done, really, but it doesn't fit into the scheme of things here. We really appreciate Deol's commitment to the story, but we feel that in the process he forgot he was making a "Sunny Deol movie". The overall effect is one of heading out to buy pizza but coming home with a porcelain vase. It may well be beautiful, but you can't eat the damn thing.

The film is a success in giving the mass hero genre a sensibility that is practically non-existent in Bollywood. Understatement, character definition, protracted tension building - we don't know of any recent Bollywood directors who gave their mass films this kind of serious work. Uncharacteristic, as we said. But that doesn't make it wholly satisfying.

Ghayal Once Again is intriguing and exciting from a filmmaking perspective, and may be good enough entertainment if you don't expect much. However, if you want a high dosage of good old aggressive Sunny Deol, perhaps you should just watch Ghayal once again.
Share. Save. Connect.
Tweet
GHAYAL ONCE AGAIN SNAPSHOT 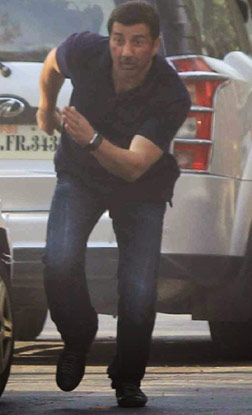 ADVERTISEMENT
This page was tagged for
Ghayal Once Again hindi movie
Ghayal Once Again reviews
release date
Sunny Deol, Narendra Jha
theatres list
Follow @fullhyderabad
Follow fullhyd.com on
About Hyderabad
The Hyderabad Community
Improve fullhyd.com
More
Our Other Local Guides
Our other sites
© Copyright 1999-2009 LRR Technologies (Hyderabad), Pvt Ltd. All rights reserved. fullhyd, fullhyderabad, Welcome To The Neighbourhood are trademarks of LRR Technologies (Hyderabad) Pvt Ltd. The textual, graphic, audio and audiovisual material in this site is protected by copyright law. You may not copy, distribute, or use this material except as necessary for your personal, non-commercial use. Any trademarks are the properties of their respective owners. More on Hyderabad, India. Jobs in Hyderabad.