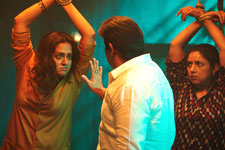 Ajay Bhashyam / fullhyd.com
EDITOR RATING
3.0
Performances
Script
Music/Soundtrack
Visuals
NA
NA
NA
NA
Suggestions
Can watch again
NA
Good for kids
NA
Good for dates
NA
Wait for OTT
NA
The credits might have you thinking Kasinath is some sort of genius. Apart from the lead role and the direction, the music, the story and the screenplay are his, too. But one look at him and the movie and you might start having serious doubts about the IQ rating system. It never ceases to amaze me how such people end up as actors - they become famous, get paid for having fun, and manage to end up with the girl, too.

But seriously, it's been a long time since we've had such an out-and-out comedy film, a la the Rajendra Prasad flicks of the 80s and the 90s. The poster says 'Laugh till you cough'. There is hardly any danger of that happening, but to give the film its due, it has its stray moments of hilarity.

Rupa (Naveena) has driven away 98 suitors as she hates marriage, and driven to his wits' end, her father goes to 'Connection Kanakamma' - the most successful matchmaker around. He tells her that he will give Rs. 50 lakhs as dowry - but only after a child is born. So our lady decides to get her useless city-dwelling nephew Anand (Kasinath) married to the girl. Kanakamma has to tell Rupa's father that Anand is very rich, and to make himself look so, Anand takes a loan from the local goonda. This side-track-story keeps coming up every so often, for some fun.

The main story revolves around how Rupa refuses to let Anand come anywhere near her because, apparently, she's scared of the 'one-eyed snake' (no, we didn't understand what that means, so don't ask us), and basically believes that men exploit women for their own selfish desires. We are told eventually why she feels this way (bad childhood experience, of course - even Kasinath is into psychobabble and Freud) and then the story is all about how Anand coaxes and cajoles her into... well, doing it.

Kasinath is a well-known Kannada actor - why in God's name did he decide to give his own voice? Any good dubbing artist could have made the role far more realistic and enjoyable. His wig is in competition with his dress sense for ridiculousness. His histrionics are amateurish and quite non-comical at times. It's only the situations he gets himself into that draw some laughter.

Naveena is excellent in her debut role. The rest of the so-called 'support cast' totally overshadow the 'lead' actor and make for some really funny comedy. There are some songs that make the neighbourhood cat sound melodious. A strictly timepass flick, but then, it's running to full houses - unbeatably Indian logic!
Share. Save. Connect.
Tweet
JACKPOT SNAPSHOT

ADVERTISEMENT
This page was tagged for
jackpot telugu movie review imdb
jackpot movie telugu
jackpot movie telugu review
jackpot telugu movie imdb
Jackpot telugu movie
Follow @fullhyderabad
Follow fullhyd.com on
About Hyderabad
The Hyderabad Community
Improve fullhyd.com
More
Our Other Local Guides
Our other sites
© Copyright 1999-2009 LRR Technologies (Hyderabad), Pvt Ltd. All rights reserved. fullhyd, fullhyderabad, Welcome To The Neighbourhood are trademarks of LRR Technologies (Hyderabad) Pvt Ltd. The textual, graphic, audio and audiovisual material in this site is protected by copyright law. You may not copy, distribute, or use this material except as necessary for your personal, non-commercial use. Any trademarks are the properties of their respective owners. More on Hyderabad, India. Jobs in Hyderabad.