Harry Potter And The Chamber Of Secrets (English) Review

It's yabba dabba doo times for all the little monsters tumbling out of school and spilling out into the hot Hyderabadi streets! Yes, kids, buckle up, grab that spidery broom and whoosh away to check out that geeky-wiz-Potter-boy! Chris Columbus's mega ballyhooed sequel Chamber Of Secrets is out, and is quite frankly for all those pre-pimpled-teens that haven't discovered the joys of Tolkien.

Unlike most kids his age, Harry Potter (Daniel Radcliff) is dying to get back to that Hogwart's wiz school where there's more than just reading, 'riting and 'rithmatic. And when bumchum Ron (Rupert Grint) pulls up on his second floor window in a flying car, both of them soar away to sophomore year in school. Was it snatches of ET in that scene or was it just me? 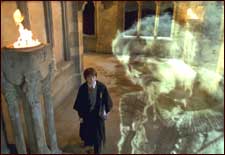 But there's plenty of action happening at Hogwarts. Someone's let loose a seriously mysterious monster in the old Building, and any kid who's caught gawking at it gets turned to stone. And of course, it's Harry and his sidekicks who have bail out everyone out of their apparent angst and get the show on the road.

Well, that's the general gobbledygook about this shtick. The sequel does manage to infuse some great CGI moments and has plenty of eye-candy for those who're keeping tabs on the animation. One bit that seemed to go down well with the audience was the 'Howler' one where letters get transformed into an Origami mouth.

The central trio of Harry, Ron and Hermione is cute. I wish, though, that Ron would really grow up - if that shrieking around like a banshee continues, he may well play Hermione's part in the next flick. But Harry remains as wooden as ever. Am I missing something or is this bloke meant to be this way? He just doesn't have enough chutzpah to carry off the role.

As far as sequels go, I suppose this bit falls neatly into the groove made by its predecessor. BUT UNLIKE The Two Towers, wherein the sequel created a canvas that enlarged the scope of the movie, Harry Potter continues to work within the narrow confines of the world created in the first bit. There is nothing terribly new or expansive in the sequel. It almost falls flat in terms of adding to the original. It might be great for folks who want to keep up with Potter, but hey, I want to see something new - perhaps something that I wouldn't expect in a Potter flick. But I suppose the filmmakers, bound by the book, are confined in terms of expression.

In terms of plot, I personally liked the parallel plot better - the Slitherns out to beat the crap out of those who weren't racially pure... huh, Schindler's List anyone?

En Fin, Harry Potter is a thoroughly enjoyable flick... if you're 12 or are close to that age mentally and love frothy whimsical fantasies. But don't let me decide, you may well be quite surprised at what you might end up liking about his spiel.
Share. Save. Connect.
Tweet
HARRY POTTER AND THE... SNAPSHOT
HARRY POTTER AND THE CHAMBER OF SECRETS (ENGLISH) SNAPSHOT
See Harry Potter And The Chamber Of Secrets (English) full details
HARRY POTTER AND THE... USER REVIEWS
HARRY POTTER AND THE CHAMBER OF SECRETS (ENGLISH) USER REVIEWS
1 - 1 OF 1 COMMENTS
POSITIVE  |  NEGATIVE |  NEWEST  |  OLDEST  |  MOST HELPFUL  |  LEAST HELPFUL
USER RATING
8.4
13 USERS
Performances
Script
Music/Soundtrack
Visuals
NA
NA
NA
NA
Can watch again - NA
Good for kids - NA
Good for dates - NA
Wait for OTT - NA
Benam Muppidi on 8th May 2003, 5:33am | Permalink
I would suggest people to read the books first, these movies don't live up to them.

I think 3rd one is the best

ADVERTISEMENT
This page was tagged for
Harry Potter And The Chamber Of Secrets (English) english movie
Harry Potter And The Chamber Of Secrets (English) reviews
release date
Daniel Radcliffe, Kenneth Branagh
theatres list
Follow @fullhyderabad
Follow fullhyd.com on
About Hyderabad
The Hyderabad Community
Improve fullhyd.com
More
Our Other Local Guides
Our other sites
© Copyright 1999-2009 LRR Technologies (Hyderabad), Pvt Ltd. All rights reserved. fullhyd, fullhyderabad, Welcome To The Neighbourhood are trademarks of LRR Technologies (Hyderabad) Pvt Ltd. The textual, graphic, audio and audiovisual material in this site is protected by copyright law. You may not copy, distribute, or use this material except as necessary for your personal, non-commercial use. Any trademarks are the properties of their respective owners. More on Hyderabad, India. Jobs in Hyderabad.