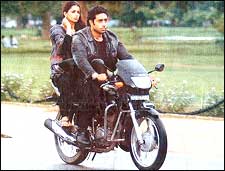 And it is definitely not a very reassuring sight for the poor suckers, when they find people pointing and laughing at them as they emerge from those ghastly portals of the torture chamber. And what's worse is that the poor sucker had paid a heavy price of Rs. 35 to be let in to begin with. And the humiliation doesn't end there. The poor sucker (read me) has to write about the whole harrowing experience.

Now comes the hard part. How do I write about a movie that my eyelids would refuse to bear the atrocities of, and hence shut out of sheer hatred? Ok here goes nothing.

Jeeva, the director of Run (may his soul Rest In Peace, cos I'm going after him), did not set out to make the typical mush-gore story. Hell no! Why on earth would he make something that would be better received?

Instead he dished out Run. The story of a headstrong boy in love with the simpering sister of a possessive gangster. Siddharth (Abhishek Bachchan) comes to Delhi to pursue further studies. And as the script would have it, Jhanavi (Bhoomika-oooh-oooh-would-you-look-at-my-dimples-Chawla).

Siddharth falls in love with Jhanavi the first time he sets his moony eyes on her on the bus. Now don't go questioning why the sister of a rich and notorious gangster is traveling by bus! This could go on forever.

So Siddharth does what any hot-blooded, young Allahabadi who wants to study further would. He spends all his time studying her. And tossing around a one-rupee coin. Don't ask us why.

A whole lot of magical, lovey-dovey music later, Jhanavi confesses her love for Siddharth to him. In the meanwhile, he has been assaulted by the goons of Ganpath (Mahesh Manjrekar), Jhanavi's brother, a million times. So have we.

But he is not the kind to stay put. Hell no! He gives the mobsters a taste of his muscles. And some of it to Jhanavi as well. And then he does the unthinkable. He challenges Ganpath, by running away with his precious sister. Thus ensues a battle of the fists where the scales tip in Siddharth's favor.

The movie has strange elements of a comical subplot running parallel to the main story in the form of Vijay Raaz that never fit in, but come as a relief. Contrary to its title, the movie goes nowhere. Run's music doesn't have even the basest elements that make for a mention. And surprisingly, the character of Mahesh Manjrekar fails to create any impact.

The only things that earn this movie the one star are some well-shot action sequences, a brilliant Mukesh Rishi (Siddharth's brother-in-law), an endearing Abhishek Bachchan and eye-candy girl Bhoomika Chawla.

So if you are looking to hack yourself to death for bad judgment then Run is a must-see. Must-must-see.
Share. Save. Connect.
Tweet
RUN (HINDI) SNAPSHOT

ADVERTISEMENT
This page was tagged for
Hindi run movie
Run Movie Hindi
Run Hindi movies
runhindi full movies
Run movie full hindi hd
Follow @fullhyderabad
Follow fullhyd.com on
About Hyderabad
The Hyderabad Community
Improve fullhyd.com
More
Our Other Local Guides
Our other sites
© Copyright 1999-2009 LRR Technologies (Hyderabad), Pvt Ltd. All rights reserved. fullhyd, fullhyderabad, Welcome To The Neighbourhood are trademarks of LRR Technologies (Hyderabad) Pvt Ltd. The textual, graphic, audio and audiovisual material in this site is protected by copyright law. You may not copy, distribute, or use this material except as necessary for your personal, non-commercial use. Any trademarks are the properties of their respective owners. More on Hyderabad, India. Jobs in Hyderabad.