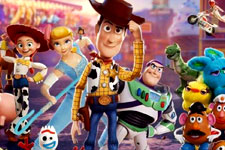 Punarvasu Pendse / fullhyd.com
EDITOR RATING
9.0
Performances
Script
Music/Soundtrack
Visuals
9.0
9.0
10.0
9.0
Suggestions
Can watch again
Yes
Good for kids
Yes
Good for dates
Yes
Wait for OTT
No
Toy Story 4, from the get-go, seemed liked a financially motivated move - releasing the fourth film in a beloved series nine years after the previous one seemed like a blatant cash-grab from Disney. To add to my cynicism, original writers Rashida Jones and her writing partner Will McCormack left the project, citing "philosophical differences". So kindly bear with this reviewer while he sits the eff down and proceeds to eat humble pie.

Toy Story has always been a tale for generations (quite literally - the series has been going on for 24 years with this release), but it is surprising how Pixar manages to keep that sense of wonder alive after so many years. With Toy Story 4, the studio veers away from the main narrative, and successfully re-engages us in spite of the sense of catharsis that came at the end of the Toy Story 3.

Toy Story 4 takes us back nine years ago in a flashback, when a distraught Woody (Tom Hanks) is consoled by Bo Peep (Annie Potts) when she is being handed over to another family that being given away is a natural part of a toy's life. Since then, Andy has donated his toys to Bonnie (Madeleine McGraw), and the usually content Woody currently finds himself neglected by his little girl. He follows her to kindergarten initiation, where he helps a lonely Bonnie create a new toy with a spork from the trash, a toy she christens Forky (Tony Hale).

Forky's inner desire to return to the trash plunges the toys into a race against time as they try to prolong the inevitable - that of Bonnie finding her new favourite toy missing. Woody goes on a rescue mission involving a rental RV, an antique store and a carnival, meeting various new toys in the process - Duke Caboom (Keanu Reeves), Gabby Gabby (Christina Hendricks), Giggle McDimples (Ally Maki), and the unfortunate duo of Ducky (Keegan-Michael Key) and Bunny (Jordan Peele). With a madcap escapade that features motorcycle stunts, almost revealing to humans that toys are alive, a dangerous cat, lost voice-boxes, and toys being adopted by kids, the gang brings to life Buzz's adage, "To infinity and beyond!"

Toy Story 4 adopts a more sombre tone than the rest of the franchise. The toys, after having spent years to just serve their apparent objective of making a child's life more enjoyable, begin to question their true purposes. Woody, especially, is visibly worried by the prospect of being forgotten or lost. Toy Story 4 almost seems like it was made from an adult's perspective - Woody is now like a parent whose offspring have left the nest. His reunion with Bo Peep brings along, with some jubilation, its own set of problems - his fear of abandonment.

This is not to say that the mood of the film is entirely pensive - far from it. Toy Story 4 might be the funniest film in the franchise yet, with plenty of jokes and running gags that would make audiences of all ages laugh. Leading that charge are the newer characters, particularly the Canadian daredevil Duke Caboom and the plushies Ducky and Bunny. Duke's esteem issues are carefully woven together with good-natured humour by a capable script that does not punch down, while a toned-down version of the typical Key & Peele act surprisingly works wonders in a children's film.

The finest part about the script of Toy Story 4, though, is the way the metaphorical aspects of the toys' journey are handled. In a throwback to the OG Toy Story movie, there are no real villains, just characters whose motivations make them do dodgy things at times. Nor is there an overarching moral truth - the movie lets kids know that there is more than one way to look at situations and that letting go is not always a bad thing. Maybe we are overthinking this, and kids won't realise/care about it - which is all the more telling of the fantastic way this movie has been handled. Regardless of the investment into the intricacies of the plot, Toy Story 4 holds enough merit at the surface level to be enjoyed by anyone old enough to understand storytelling through sounds and images.

Tom Hanks shows Woody's character progression beautifully, adding a shade of world-weariness to his performance. Tim Allen voices the ever-confident Buzz Lightyear, yet shows the little vulnerabilities in the character, especially Buzz's understanding of leadership. Annie Potts brings along equal amounts of pragmatism and adventure as the "lost" Bo Peep, paired wonderfully with Ally Maki as Giggle, her second-in-command.

Keanu Reeves ranges between low-spirited and lively as the stunt rider Duke Caboom, in a role that we have seen him perform wonderfully multiple times before (can it be called a typecast role if he is a voice artist?). Christina Hendricks totally flexes her range, being unexpectedly creepy at first as the doll Gabby Gabby, AND then later pulling off some of the most tender moments of the movie. Key & Peel is a signature brand of comedy, that you either love or hate (but it's hard to argue that it doesn't fit into the narrative).

Director Josh Cooley said in a press statement once that he couldn't imagine making a Toy Story movie without Randy Newman's music. And Newman is at his very best, providing a soundtrack that makes you laugh, makes you cry - and basically makes you sit down and take note of. It would be no surprise if Toy Story 4 wins awards for its music (not that it is surprising to begin with - he has already won an Academy Award for Toy Story 3).

For once, there's not much to add in conclusion. Just go watch the damn movie.
Share. Save. Connect.
Tweet
TOY STORY 4 SNAPSHOT 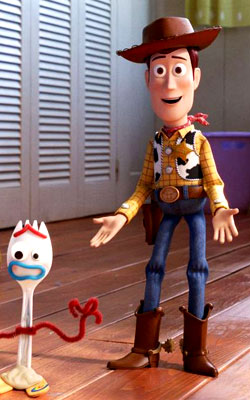 ADVERTISEMENT
This page was tagged for
Toy Story 4 english movie
Toy Story 4 reviews
release date
Tom Hanks, Tim Allen
theatres list
Follow @fullhyderabad
Follow fullhyd.com on
About Hyderabad
The Hyderabad Community
Improve fullhyd.com
More
Our Other Local Guides
Our other sites
© Copyright 1999-2009 LRR Technologies (Hyderabad), Pvt Ltd. All rights reserved. fullhyd, fullhyderabad, Welcome To The Neighbourhood are trademarks of LRR Technologies (Hyderabad) Pvt Ltd. The textual, graphic, audio and audiovisual material in this site is protected by copyright law. You may not copy, distribute, or use this material except as necessary for your personal, non-commercial use. Any trademarks are the properties of their respective owners. More on Hyderabad, India. Jobs in Hyderabad.