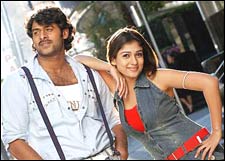 EDITOR RATING
3.0
Performances
Script
Music/Soundtrack
Visuals
NA
NA
NA
NA
Suggestions
Can watch again
NA
Good for kids
NA
Good for dates
NA
Wait for OTT
NA
And half a star there is for pain-stakingly incorporating just about every cliché ever in Telugu films.

See Yogi full details
YOGI USER REVIEWS
1 - 7 OF 7 COMMENTS
POSITIVE  |  NEGATIVE |  NEWEST  |  OLDEST  |  MOST HELPFUL  |  LEAST HELPFUL
USER RATING
4.2
96 USERS
Performances
Script
Music/Soundtrack
Visuals
NA
NA
NA
NA
Can watch again - NA
Good for kids - NA
Good for dates - NA
Wait for OTT - NA
Vijay on 12th Feb 2007, 12:24pm | Permalink
I Plea the directors and producers not to make such kind of horrible movies by keeping the B and C grade audience in mind and with specific commercial targets. These kind of movies will always play be a bad part on thier careers.
RATING
2
Srinivas Reddy on 31st Jan 2007, 8:36pm | Permalink
beckar movie
RATING
2
Naveen Mannava on 16th Jan 2007, 10:18am | Permalink
Such horrible movie...crap...its not at all a prabhas movie... see chatrapathi..can not campare. what happen to VV.Vinayak...where the charm of DIL...such an idiotic movie...please donot waste time by watching such movies...very disappointed...waiting for munna.
RATING
4
Pratap Reddy on 16th Jan 2007, 10:09am | Permalink
Actually you people should have had some sense to watch a Kannada Remake... lol... that industry is an example of creative bankruptacy and when movies are hits in Karnataka you need to assume that the concept was lifted from somewhere or the movie is low-class. On the contrary Malayalam movies have lots of script writing and genuine intelligence involved. Understand this when you go to a remade movie.
RATING
2
Dina Kyas on 16th Jan 2007, 6:35am | Permalink
Such a horrible movie..This movie should have came in 80's, still it would have failed to attract any body..do not waste you precise time and money by watching stupid movies like this..
RATING
2
Venkat Kishore Ryakala on 15th Jan 2007, 9:16pm | Permalink
baaad review, dude/ette..what u call anachronistic i deem atavistic...it is morally pretentious of us to judge a cover by the book...umm...moving on, the actor has the emotional range of a teaspoon, granted, but it was an INTENTIONAL characterisation by the GENIUS that is this actor (i forget his name, prabhakar?..)..the heroine subtle yet IN-YOUR-FACE attempts at MILITARY level stalking followed by "oh, fancy meeting you here" moments show a keen understanding of military strategie on the part of the director, hats off to you sir...the entire movie is a keen and insightful commentary on the ethos and melodramatic grandeur of an earlier epoch in film-making juxtaposed with the dog-eat-dog sensibilities of this modern time...that the user squeams in his seat is but the INTENDED result of an implicit existential dilemma, the absurdist one, yanked to the conscious of the user by its nostril hair...yet in this explicitly agnostic review, you gloss over such subtle genious and you call it trite? no, good sir, this review is NOT the way to herald and highlight what is undoubtedly one of the finest cinematic experiences in recent times...I'm positive this opinion of mine will only be strengthened when I actually WATCH this movie...peace out, ryakala[AT]gmail.com
RATING
10
Priyanka Rao on 14th Jan 2007, 8:21pm | Permalink
The saddest part of the film is that I had to see a queue of more than 100 people waiting to see the next show and I was unable to stop even one. :-(. This movie is as ridiculous as any one can get.
RATING
2
LEAVE A COMMENT
fullhyd.com has 700,000+ monthly visits. Tell Hyderabad what you feel about Yogi!
MORE MOVIES
Latest Reviews
Don't Worry Darling
Vikram Vedha
Ponniyin Selvan - 1
Naane Varuvean
Nene Vasthunna
more
Krishna Vrinda Vihari
Saakini Daakini
Where the Crawdads Sing
Everything Everywhere All At...
Aa Ammayi Gurinchi Meeku Che...
Brahmastra: Part One - Shiva
Oke Oka Jeevitham
Brahmastra: Part One - Shiva
Ranga Ranga Vaibhavanga
First Day, First Show
Contemporary Reviews
Seetha Ramudu
Shiva 2006 (Telugu)
The Myth - Adbhutha Veerudu ...
Vasantham
Gana
more
Jism
Khosla Ka Ghosla
Okkadu
Lakshmi Narasimha
Qurbani
Aap Ki Khatir
Krrish (Telugu)
Golmaal
123
Random Reviews
Pellam Vachchindi
Ammayi Kosam
Kaash Aap Hamare Hote
Chain Kulii Ki Main Kulii
Na Anevadu
more
Dammunnodu
Ragini MMS
Neeku Naaku Dash Dash
Mud
Veerudokkade
Dum Laga Ke Haisha
Akira
Star Wars: The Last Jedi
The Lion King
Liger
SEARCH MOVIES
Dissatisfied with the results? Report a problem or error, or add a listing.
ADVERTISEMENT
SHOUTBOX!
{{todo.name}}
{{todo.date}}
[
ip{{todo.ip}}
]
{{ todo.summary }}... expand »
{{ todo.text }} « collapse
First  |  Prev  |   1   2  3  {{current_page-1}}  {{current_page}}  {{current_page+1}}  {{last_page-2}}  {{last_page-1}}  {{last_page}}   |  Next  |  Last
{{todos[0].name}}

ADVERTISEMENT
This page was tagged for
???????? ???? ?????? ??????? ??????? ?????? ????????
Yogi Telugu cinema
Telugu Yogi full movie
telugu movies yogi
yogi telugu movie
Follow @fullhyderabad
Follow fullhyd.com on
About Hyderabad
The Hyderabad Community
Improve fullhyd.com
More
Our Other Local Guides
Our other sites
© Copyright 1999-2009 LRR Technologies (Hyderabad), Pvt Ltd. All rights reserved. fullhyd, fullhyderabad, Welcome To The Neighbourhood are trademarks of LRR Technologies (Hyderabad) Pvt Ltd. The textual, graphic, audio and audiovisual material in this site is protected by copyright law. You may not copy, distribute, or use this material except as necessary for your personal, non-commercial use. Any trademarks are the properties of their respective owners. More on Hyderabad, India. Jobs in Hyderabad.