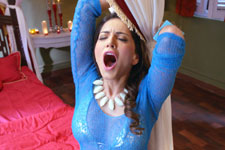 Nupur Barua / fullhyd.com
EDITOR RATING
5.0
Performances
Script
Music/Soundtrack
Visuals
6.0
5.0
5.0
7.0
Suggestions
Can watch again
No
Good for kids
No
Good for dates
Yes
Wait for OTT
Yes
All you need to know about Ragini MMS 2 is that (a) it belongs to the horrex (horror+sex) genre, and (b) Sunny Leone gets top billing. The rest of the movie is then best left to your imagination, but since this is a Balaji production and since the prequel was such a surprisingly decent movie, it deserves some analysis.

The movie begins with the Hanuman Chalisa, to ward off evil spirits, and if you are a believer, you better chant along. A filmmaker (Parvin Dabbas) is fascinated by the events that led a young girl (Kainaz Motivala) to an asylum a couple of years ago. After their sex video was leaked, the girl went crazy, and the boy (Rajkummar Rao) disappeared. The girl insists that the house they went to, for a "dirty weekend", is haunted by a chudail. The filmmaker wants to recreate the story, and so he sets off with his cast and crew to the location.

His muse and leading heroine is Sunny (Sunny Leone), a hot woman with enough oomph to steam the spectacles off your nose. She is sporting enough to shed inhibitions and portray an exaggerated version of the girl who is now in the asylum, despite her standing as a film star. The filmmaker has his own version of the events that led him here, and they begin their shoot.

Slowly, however, it becomes clear that there is something not quite right with the place, and this is aggravated by the fact that it is the night of Kartik Purnima. The chudail finds Sunny a willing medium to possess, and things go out of control after that, with people being bumped off without warning.

To say more would be to give away the plot, although the above story may sound familiar to any horror geek. What separates this particular screenplay from the usual stack of horrex movies is the relative absence of cliches. Of course, the Hollywood influence is apparent in both story and shots, but the movie manages, somehow, to remain largely unpredictable. And that is what makes Ragini MMS 2 an interesting watch.

On the flip side, the dialogues are corny, and the less said about the dialogue delivery, the better. The humour is rather forced, but it works in certain sequences.

The reason for this attraction may also be the fact that the rest of the actors pale in comparison, when it comes to screen presence. Parvin Dabbas and Divya Dutta are comfortingly familiar in this genre, though they do not add much to the production. Sandhya Mridul, on the other hand, goes OTT in her role as a fading star. Karan Mehra as the self-obsessed television actor keeps it real. The other members of the cast have small, but significant roles.

The production design is slightly below average, given the sensibilities of the first movie. The location is the same one that was used in the first movie, but somehow, this time it looks propped up and set-like. Or maybe that was the intention, given that Ragini MMS 2 is a movie within a movie.

While the rest of the cast has normal costumes, Sunny Leone gets her pick of lingerie and "sexy" clothes, which is the reason you cannot take your eyes off her.

The director, Bhushan Patel, is chiefly a cinematographer, so he knows how to direct his frames, and his lighting is the only reason the movie does not look as tacky as it would have in the hands of somebody else. He avoids the usual scary tactics that horror movies adopt, and the result is a relatively aesthetic scare-fest, complete with blood and gore.

The music is not great, but Baby Doll is already a hit on the Internet. Also, the music videos seem pretty random most of the time, and completely unrelated to the movie. The length of the movie is perfect, and the editor needs to be lauded for that.

Ragini MMS 2 is a commercial movie, unlike its predecessor, Ragini MMS. It has the glitz and the glamour that the first one lacked, and the subsequent absence of reality places it in a different genre. However, the connection between the two movies is prominent throughout, and Bhushan Patel knows what he is doing with the VFX and the thrills/scares. Definitely worth one watch, but not for the faint-hearted, and not for die-hard fans of The Blair Witch Project series (the inspiration is evident).
Share. Save. Connect.
Tweet
RAGINI MMS 2 SNAPSHOT 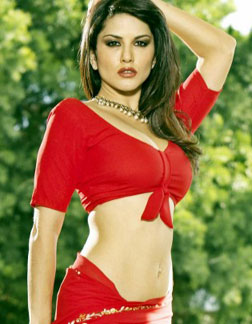 ADVERTISEMENT
This page was tagged for
ragini mms 2 movie in hindi hdgolkes
ragini xvieos
www.xvieos. mumbai ragini biotech
Ragini MMS 2 hindi movie
Ragini MMS 2 reviews
Follow @fullhyderabad
Follow fullhyd.com on
About Hyderabad
The Hyderabad Community
Improve fullhyd.com
More
Our Other Local Guides
Our other sites
© Copyright 1999-2009 LRR Technologies (Hyderabad), Pvt Ltd. All rights reserved. fullhyd, fullhyderabad, Welcome To The Neighbourhood are trademarks of LRR Technologies (Hyderabad) Pvt Ltd. The textual, graphic, audio and audiovisual material in this site is protected by copyright law. You may not copy, distribute, or use this material except as necessary for your personal, non-commercial use. Any trademarks are the properties of their respective owners. More on Hyderabad, India. Jobs in Hyderabad.