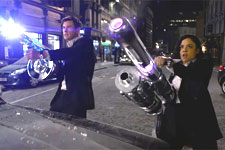 Punarvasu Pendse / fullhyd.com
EDITOR RATING
4.5
Performances
Script
Music/Soundtrack
Visuals
7.0
4.0
7.0
4.0
Suggestions
Can watch again
No
Good for kids
Yes
Good for dates
Yes
Wait to rent it
Yes
Hollywood seems to have found a formula recently - they half-heartedly shoehorn in some kind of burning social issue into a reboot, and hope that the draw of the initial movie and some perfunctory current day self-questioning will endear their insincere homage to the original to the masses. Men In Black: International seems right out of that mould, quite like X-Men: Dark Phoenix which released a little while ago. Both movies have almost identical scenes in which a woman is questioning the usage of the term "men" in the names of their respective organisations.

Men In Black: International is the first MIB film that hasn't been directed by Barry Sonnenfeld. New director F Gary Gray has a doubly tricky task in the 2019 reboot. One the on hand he needs to carefully maneuver around a franchise that relied a lot on the sharp repartee between Tommy Lee Jones' dependable Agent K and Will Smith's maverick Agent J without the presence of said duo. On the other hand, there is going to be a lot of expectation from his handling of Chris Hemsworth and Tessa Thompson, who shared a fun and easy-going chemistry in Thor: Ragnarok that is obviously going to draw comparisons with how they are dealt with in Men In Black: International.

A young girl, Molly (Tessa Thompson), witnesses her parents being neuralyzed by the Men In Black after they accidentally get in contact with aliens, sending her on a 20-year journey to become one of them. Agent O (Emma Thompson) decides that Molly has what it takes to be an agent of the MIB, and we are introduced to the newly inducted and rechristened probationary Agent M. She is immediately whisked off to London for the first mission, where she meets Agent H (Chris Hemsworth), who happens to the guy everyone wants to be.

Easily dismantling the suspicions of Agent C (Rafe Spall), and brushing aside H's preference to work alone, M gets onto the field in a dangerous (if fun) ride alongside fantastic technology, secret weapons, inter-galactic arms dealers, and a boatload of alien races - featuring a tiny alien called Pawny (Kumail Nanjiani) who ends up accompanying the duo. With the support of Agent T (Liam Neeson) and a bunch of ass-kicking, Agent M / Molly and Agent H / Henry once again face off against the powerful Hive race.

To put it bluntly, Men In Black: International fails spectacularly in realising what made the original MIB movies so special. Molly turns into Agent M off-camera, and we see nothing of her progression, unlike that of Smith's Agent J, making it inordinately hard for you to develop any sort of connection with the character. The pacing of the film is unhurried, but not in a good way - the zippy, zappy tone of the original movies is all but lost in the reboot. The script relies way too much on the comical talents of Najiani's Pawny, giving him all of the film's best lines. Hell, the most memorable non-Pawny joke this reviewer recalls is Hemsworth throwing a hammer, à la Thor, which speaks volumes about the writing here.

The one redeeming characteristic that big-budget action movies have, even if they fail on the story front, are the special effects. Men In Black: International doesn't live up in this department either - the roads in London and Marrakesh feel emptier than what you would expect, while the crowd inside a nightclub in one important scene feels fake and overdone. The actors and aliens (especially the twins) seem like they exist on different planes, and the CGI never quite comes together with the live action.

Chris Hemsworth and Tessa Thompson are largely underutilised for a pair that has previously shown a fantastic ability to play off of each other, though Thompson at the very least has an opportunity to showcase the fresh point of view that her character introduces to the MIB. It is indeed very sad that Hemsworth's comic timing is severely unexplored, a sharp contrast from the Avengers franchise. Kumail Nanjiani is easily the winner when it comes to the script - a disproportionate amount of humourous lines are given to him, and he delivers. Emma Thompson, Rafe Spall and Liam Neeson all play their parts well, but do nothing extraordinary worth speaking about.

Men In Black: International is fun in parts, in a very generic way. But it brings us back to something we said during the 2019 reboot of Hellboy : "What is the point of doing a reboot if the original is arguably superior?"

Or to borrow Agent J's line, in context with the original Men In Black films: "You know the difference between you and me? I make this look good."
Share. Save. Connect.
Tweet
MEN IN BLACK: INTERNATIONAL SNAPSHOT 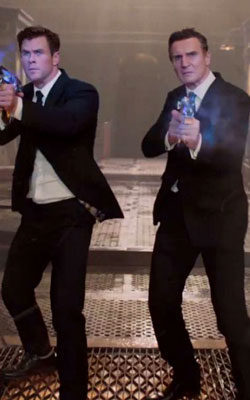 ADVERTISEMENT
This page was tagged for
Men In Black: International english movie
Men In Black: International reviews
release date
Chris Hemsworth, Tessa Thompson
theatres list
Follow @fullhyderabad
Follow fullhyd.com on
About Hyderabad
The Hyderabad Community
Improve fullhyd.com
More
Our Other Local Guides
Our other sites
© Copyright 1999-2009 LRR Technologies (Hyderabad), Pvt Ltd. All rights reserved. fullhyd, fullhyderabad, Welcome To The Neighbourhood are trademarks of LRR Technologies (Hyderabad) Pvt Ltd. The textual, graphic, audio and audiovisual material in this site is protected by copyright law. You may not copy, distribute, or use this material except as necessary for your personal, non-commercial use. Any trademarks are the properties of their respective owners. More on Hyderabad, India. Jobs in Hyderabad.