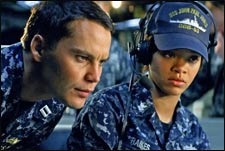 Nupur Barua / fullhyd.com
EDITOR RATING
4.0
Performances
Script
Music/Soundtrack
Visuals
5.0
4.0
5.0
7.0
Suggestions
Can watch again
No
Good for kids
Yes
Good for dates
No
Wait for OTT
No
Hasbro, one of the largest toy and board game manufacturers in the world, has a lot to be grinning about. With their Transformers series becoming a film franchise, their most popular board game, Battleship, was an obvious choice for a movie. It was inevitable, so to speak, and the result is an overhyped Hollywood flick, with more emphasis paid on the fact that Rihanna debuts as an actor, than on any strategic or logical movements in the story.

Lt. Alex Hopper (Taylor Kitsch) is the underdog naval officer who is in love with Samantha (Brooklyn Decker), and has to therefore impress his prospective father-in-law, Vice Admiral Shane (Liam Neeson). In true Armageddon style, Shane disapproves of the relationship, and refuses to recognise the potential that the young Hopper has.

So there they are, in the middle of the Pacific Ocean, on the USS John Paul Jones. Hopper has an older brother, Stone (Alexander Skarsgard), who is the Commanding Officer on the USS Sampson. Life is as normal as it can get, till Hopper and his crew-mates chance upon the Regents, aliens who have been trying to build a power source in the middle of the ocean.

What follows is predictable - Aliens vs the Navy. The rest of the movie concentrates on the Transformers-inspired aliens shooting great balls of fire at humankind, in an effort to wipe them out, no doubt, and the Navy guys trying to outsmart them.

What is never clear is why exactly all of the above are happening. And to add to the chaos, there are numerous sub-plots and twists that confound the mind.

What the director and the writer have done, very smartly, is put in a whole lot of unrelated, meaningless dialogues and situations that leave you confused. Just when you think you have grasped the significance of a dialogue (for example, Rihanna going on about how her daddy always said that "they" would come one day), you are offered a Japanese naval ship with an expressionless Commanding Officer (Tadanobu Asano) who may be a problem.

Or you can use your own intellect and realise that the makers of the film had no idea what they were doing, and have tried to cover up every defect with a bigger flaw.

And, if you are a movie buff, you will notice the mash-up that the movie is, with heavily borrowed plot points, characters, situations and solutions from a host of other Hollywood heavies, including the afore-mentioned Armageddon and Transformers, as well as Top Gun (reluctant leader), Independence Day (getting to the heart of the alien operations), Pearl Harbour (the Japanese and naval connections) and many more.

What strikes you the most about Battleship is the noise. This has to be one of the loudest movies ever churned out at this budget ($200 million).

The costumes are uninspired, and the production design even blander. It does not help that most of the action takes place in the middle of the ocean.

Taylor Kitsch, all buffed up, is the typical American hero, fails to leave an indelible mark. He does his bit, but there are times when he gets carried away by his own delusions of being a performer.

Liam Neeson looks bored, and just when you forget that he is a part of the movie, he reappears. The only actor worth mentioning is Tadanobu Asano, who makes a sincere effort. Alexander Skarsgard is wasted.

That brings us to Rihanna, almost unrecognisable without the red hair. She sulks and broods throughout the movie, and is the most unconvincing gunner ever portrayed on screen. That she is given unintentionally stupid dialogues does not help.

Watch Battleship only if you can leave your keen mind behind, and if you can laugh at the face of disaster and mayhem (because once you get over the lack of direction in the movie, it can be pretty hilarious). And yes, carry cotton wool for your ears.
Share. Save. Connect.
Tweet
BATTLESHIP (TELUGU) SNAPSHOT 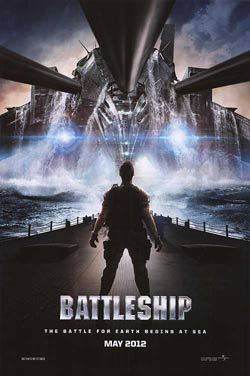 ADVERTISEMENT
This page was tagged for
battleship full movie telugu
battleship movie download in telugu
battleship full movie telugu dubbed
telugu battleship movie
battleship telugu dubbed
Follow @fullhyderabad
Follow fullhyd.com on
About Hyderabad
The Hyderabad Community
Improve fullhyd.com
More
Our Other Local Guides
Our other sites
© Copyright 1999-2009 LRR Technologies (Hyderabad), Pvt Ltd. All rights reserved. fullhyd, fullhyderabad, Welcome To The Neighbourhood are trademarks of LRR Technologies (Hyderabad) Pvt Ltd. The textual, graphic, audio and audiovisual material in this site is protected by copyright law. You may not copy, distribute, or use this material except as necessary for your personal, non-commercial use. Any trademarks are the properties of their respective owners. More on Hyderabad, India. Jobs in Hyderabad.