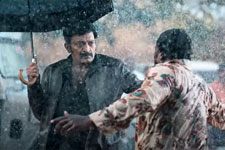 Neema Pramod / fullhyd.com
EDITOR RATING
6.0
Performances
Script
Music/Soundtrack
Visuals
6.0
7.0
7.5
7.5
Suggestions
Can watch again
No
Good for kids
No
Good for dates
No
Wait to rent it
Yes
As per Hindu mythology, Kalki is the tenth incarnation of Lord Vishnu - the one whose purpose is to wipe out adharma (injustice) and usher in the era of truth (the satya yuga). When you think about it, Kalki (Rajasekhar) in the movie isn't much different from your standard Telugu film hero. Take any commercial film - from Indra and Pokiri to Gabbar Singh - and all of them have heroes who are destined to vanquish evil. And of course, they possess supernatural powers which help them defy every law in the physics textbook. It is this very divinity of the hero that Prashanth Varma uses to make an otherwise ordinary star vehicle a little more interesting.

It is the 1980s, and we are in Kollapuram, a village in Telangana. A man is found murdered - hung upside-down from a tree and set ablaze. He is Sekhar Babu (Siddu Jonnalagadda), the sole ray of hope in the lives of the villagers reeling under the weight of the abuse showered upon them by the dreaded local MLA Narassappa. Who killed the benevolent Babu, and how is his death connected to the mysterious capsizing of three boats containing pilgrims? These are the questions Kalki, IPS, seeks to answer. Accompanying him is Devadatta (Rahul Ramakrishna), a journalist who claims to know more about the murder than anyone else in the village. The film follows the two of them as they work to unravel the mystery behind the murder.

Kalki is director Prashanth Varma's attempt at commercial cinema after making a stunning debut with last year's Awe!. Though this movie does not come anywhere close to uniqueness of the latter, it still makes for an interesting watch ...for most part.

The first half - to put it bluntly - is a bore. After effectively setting up the mystery in the first ten minutes or so, the film begins to meander. In fact, it gets so tedious after a point that by the time it hits the half-way mark, you will become close friends with the seconds hand of your watch. The movie tries too hard to create suspense by adding unnecessary elements like the possible presence of a ghost. The inclusion of a romantic track between Kalki and Padma (Adah Sharma) further slackens the pace. And the overuse of slow-motion shots does nothing to help matters.

However, post the mandatory item-number that comes immediately after the second half, the movie finally finds its footing. The earlier problems still persist, but to a lesser degree, as the mystery finally begins to unravel before your eyes. The mythological symbolism - which was present in the first half as well - becomes more prominent here, especially in the stylishly shot action sequences. Each action scene has Kalki donning one of the ten avatars of Lord Vishnu - sometimes he wields an axe, sometimes a plough, sometimes a bow and once even a device shaped like the Sudarsana Chakra. Shravan Bharawaj's wonderful background score further enhances these portions.

You cannot help but wonder how the film would have turned out had the hero been played by a more charismatic actor. Rajasekhar seems to have sleep-walked through his role, and does not have the commanding screen presence needed to pull off such a character. The music and the lyrics convey the mythical shades of the part more than the actor himself.

It is Rahul Ramakrishna who truly makes the movie. He has the hall in splits every time he is on screen, which is great as he appears in almost every scene. He keeps the film afloat even in its dullest moments. The part he plays is basically a stand-in for the audience, providing a voice to the thoughts running in their minds, but he infuses so much life into his character that it never feels monotonous.

The rest of the cast is just as competent. Ashutosh Rana, Nassar and Jayaprakash are dependable as always, and the female actors like Adah Sharma, Nandita Swetha and Pujita Ponnada also make their presence felt. Siddu Jonnalagadda too puts in a good performance.

Techically, Kalki is top-notch. The visuals are stunning, and so is the music. The fight sequences, as I mentioned, are well-shot - especially the rain-fight right before the interval. The amount of detailing that has gone into the film is worth mentioning - be it the setting, the clues or the mythical references strewn all across the movie.

As for the final twist, it surely packs a punch, but you'll wish that it were revealed more gradually. Like in Awe!, everything is explained only in the final few minutes of the film, and the information is thrown at you at such a rapid pace that it becomes hard to catch up. Nevertheless, the reveal does take you by surprise, and almost makes you want to revisit the film (had patience been your best virtue) to spot the clues you might have missed.

Kalki has its flaws, but it has an intelligent story at its core. Had it been executed better, it could have made for a mind-blowing commercial film. But even in its current form, it makes you take note of Prashanth Varma as yet another new talent to look out for. If you grit your teeth and make it through the first half, the reward is not so bad.
Share. Save. Connect.
Tweet
KALKI SNAPSHOT 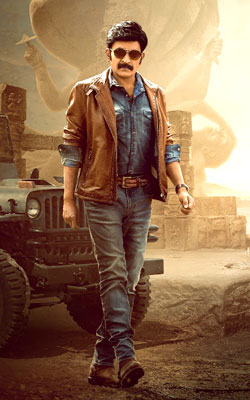 ADVERTISEMENT
This page was tagged for
kalki telugu full movie
kalki telugu review fullhyderabad
kalki telugu review
fullhyd review kalki
Kalki telugu movie
Follow @fullhyderabad
Follow fullhyd.com on
About Hyderabad
The Hyderabad Community
Improve fullhyd.com
More
Our Other Local Guides
Our other sites
© Copyright 1999-2009 LRR Technologies (Hyderabad), Pvt Ltd. All rights reserved. fullhyd, fullhyderabad, Welcome To The Neighbourhood are trademarks of LRR Technologies (Hyderabad) Pvt Ltd. The textual, graphic, audio and audiovisual material in this site is protected by copyright law. You may not copy, distribute, or use this material except as necessary for your personal, non-commercial use. Any trademarks are the properties of their respective owners. More on Hyderabad, India. Jobs in Hyderabad.