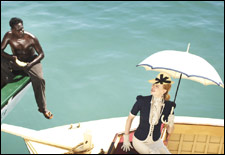 Samrat Sharma / fullhyd.com
EDITOR RATING
6.5
Performances
Script
Music/Soundtrack
Visuals
7.5
5.5
7.0
8.5
Suggestions
Can watch again
No
Good for kids
Yes
Good for dates
Yes
Wait for OTT
No
Trying to bring a nation's character to cinematic widescreen glory, in the self-aware stylings of epic movies of the bygone era, Baz Luhrmann forgot to add the extra special dose of drama that made films like Gone With The Wind beyond mere spectacle. His take on the new epic is a beautiful, yet shallow, paean, and ultimately forgettable for it.

It is an ambitious film full of heart - Luhrmann is at his intoxicating best when he showcases the prairies of the outback and the horizons of the land of his story - and indeed full of head - there are some very strong choices that Luhrmann has made in framing his shots, and this is a proper epic. It is however bereft of soul, built on the ground of an un-engagingly paced story, shallow characters and mediocre acting.

The problem here is context. Luhrmann's films have been flamboyant takes on whatever happens to catch his fancy, mixed violently with cinematic tropes that he feels reflect his themes best. That he happens to be furiously talented and manically obsessive about his detail always helps. Australia, despite the homegrown charm of the leading pair, and the various historical events rearing their heads, is not used as a strong context for the story.

The pacing lacks enough energy to keep us engaged, and the problem is compounded by the love story that fails to engage, partly because of the leading pair, and partly because of the story itself. Narrated by someone who is ostensibly the soul of the film, Nullah (Brandon Walters), the simple tale starts with Lady Sarah Ashley (Kidman) arriving in Darwin from England to search for her husband.

She meets a cattle drover unimaginatively called The Drover (Jackman), and in what appears to be a spoof of old Spencer Tracy films, they hate each other only to fall in love. The husband has been killed well before the Lady arrives, you see, and there are aspersions cast on her land and cattle by various angles. The love fruitions in a tedious but lovingly mounted cattle drove sequence that ends in a race to load 1,500 cows on a ship, which isn't the sort of thing I'd mention, but hey, it's a strong moment in the story.

The film never much recovers from this bizarre sense of plotting that plays up the melodramatic moments more that it does the character moments, as such making the characters wafer-thin cut-outs that go through the motions. Jackman's screen charisma saves the movie from becoming unbearable for a long time, but when he leaves after a spat, the watchability takes a nosedive.

The sub-plot, or dare I say secondary main plot, about Nullah and his coming of age as a way to explore the Stolen Generations of aboriginal origin children is relegated to being a straight up rescue/revenge mission, and never contributes to any major themes in the film. In fact, when a friend asked me what the film was about, I had no answer. The film isn't really about anything - no theme stands out as prevalent, no thematic subject or ground being tread. The film just is.

In any other film, just the lead actor's charm, the visionary cinematography and the broad-stroke subject matter or matters might have be enough for it to be good. The problem with Australia is that it is a movie contending to be a major epic, and as epics go, the tale is not engaging enough, the vision is not soulful enough, and this largely forgettable film has enough flaws in the structure of the epic itself that it cannot be recommended without the caveats.

It still has some of the most breathtaking shots, CGI or otherwise, committed to film this year, and has a large heart, one which lets it rewrite history a little, and play with history in other instances. It is a bona fide epic, just not a very good one. It has plenty of style, just not enough dramatic integrity, and suffers from it.
Share. Save. Connect.
Tweet
AUSTRALIA SNAPSHOT

ADVERTISEMENT
This page was tagged for
Australia english movie
Australia reviews
release date
Hugh Jackman, Nicole Kidman
theatres list
Follow @fullhyderabad
Follow fullhyd.com on
About Hyderabad
The Hyderabad Community
Improve fullhyd.com
More
Our Other Local Guides
Our other sites
© Copyright 1999-2009 LRR Technologies (Hyderabad), Pvt Ltd. All rights reserved. fullhyd, fullhyderabad, Welcome To The Neighbourhood are trademarks of LRR Technologies (Hyderabad) Pvt Ltd. The textual, graphic, audio and audiovisual material in this site is protected by copyright law. You may not copy, distribute, or use this material except as necessary for your personal, non-commercial use. Any trademarks are the properties of their respective owners. More on Hyderabad, India. Jobs in Hyderabad.