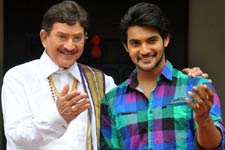 Ravi Kandala / fullhyd.com
EDITOR RATING
2.0
Performances
Script
Music/Soundtrack
Visuals
2.0
2.0
2.0
4.0
Suggestions
Can watch again
No
Good for kids
No
Good for dates
No
Wait to rent it
No
Before we get into the nitty-gritty of Sukumarudu, let us take you to an imaginary scenario. Imagine you've bought yourself hard-earned first class tickets on a flight, albeit to a mundane destination. You're determined to enjoy your flight. You board the flight, find that your seat is luxurious, the air-hostess is pleasant, the pre-takeoff refreshments are indeed refreshing, and you have an excellent movie on your iPad that you intend to catch. Now, all set, you are waiting for the flight to take off. The doors are closed, but the flight does not budge. An hour of waiting later, all signs of pleasantness in the crew disappears, the refreshments dry up, and the flight does not budge. Then the A/C in the flight is switched off, and you are left there wondering whatever happened to your pleasant flight plans!

Sukumarudu leaves you with that kind of a feeling. You know that it is a small-time film, but you anyway step into the theatre expecting some semblance of entertainment. You have seen Pilla Zamindar, Sukumarudu's director's first outing,and think he can do a decent job with this movie. You settle down in your comfortable seats with the popcorn, and wait for the movie to take off and hit the right notes.

But right in the first few minutes, you see star-son Aadi trying to act, and your expectations go down a bit. As the movie progresses, you realize it has quite a few emotional hooks, and hope that these will help it take off sometime soon. By the time the interval rolls in, you realize you've been tricked. This is a movie that was never destined to take off.

Sukumarudu has a plot remarkably similar to the recently released Greeku Veerudu. Considering that there are very few secrets in the film industry, one wonders how no one ever heard that they are making two movies with the same storyline simultaneously.

Sukumar (Aadi) is an NRI who does not believe in relationships and is only interested in making money. He lives in Europe, and makes obscene amounts of money. He wants to start his own firm, but does not have enough funds to in the bank.

This is when he comes to know of his inheritance in India worth Rs. 150 crores, and decides to come to India, sell his property, and go back and fund his dream. He comes to his native village, where his grandmother Vardhanamma (Sarada) presides over a vast palace and property. She's slightly senile, and is constantly aided by a distant relative and confidante (Rao Ramesh).

Sukumar tries to implement his plans immediately, but is continually thwarted by this man or by the old woman's senility. There are a million other sub-plots throughout the movie that all converge in Sukumar realizing the folly of his ways, Sukumar getting married to the local village belle, Sankari (Nisha Agarwal), Sukumar redeeming his grandfather's pride, and Sukumar settling down and bringing prosperity to the village.

The film has a smart emotional hook that could have been milked for all it was worth, but the director seems to be burdened to make a "mass" movie to project Aadi as a "mass" hero. The film deviates into innumerable sub-plots, none of which has any conviction or is carried to any logical conclusion.

It also has a huge star-cast - from Chandramohan to JP to Vennela Kishore to Thagubothu Ramesh to Srinivas Avasarala to Rao Ramesh to Sarada to MS Narayana; the screen is filled with characters that add little value to the story.

Aadi, "dialogue king" Sai Kumar's son, has a good voice, but the way he speaks Telugu is unpardonable. He pronounces the heroine's name as "Saaankari", making you want to slap him every time he says that. He is yet to find his feet in enacting emotional scenes, and is overshadowed by everyone else in the film.

Nisha Agarwal is destined to follow in the footsteps of the other lesser known star sisters like Tanisha or Shamita Shetty - the not-so-pretty-sister of a big star not making it big seems a common story.

There is another lead in the movie, a girl named Bhavana, who is so spectacularly single-note that even the director decided to show her face only for a few frames in the movie.

Anoop Rubens dishes out his standard fare of techno-beat introduction song, romantic duets, mass number with teen-maar beats and one emotional song. All the songs sound bad and look ridiculous.

The technical and production values are quite nice, though, meaning that the producer will bear a heavy loss.

Sukumarudu is yet another summer movie that will only run if the audience decides that watching it in an air-conditioned theatre is better than braving the sun outside. If you ask us, staying at home and watching a re-run of Pilla Zamindar on TV is a much better option.
Share. Save. Connect.
Tweet
SUKUMARUDU SNAPSHOT 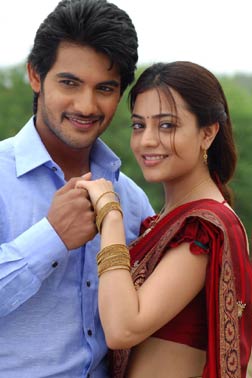 ADVERTISEMENT
This page was tagged for
sukumarudu film review
Sukumarudu telugu movie
Sukumarudu reviews
release date
Aadi, Nisha Aggarwal
Follow @fullhyderabad
Follow fullhyd.com on
About Hyderabad
The Hyderabad Community
Improve fullhyd.com
More
Our Other Local Guides
Our other sites
© Copyright 1999-2009 LRR Technologies (Hyderabad), Pvt Ltd. All rights reserved. fullhyd, fullhyderabad, Welcome To The Neighbourhood are trademarks of LRR Technologies (Hyderabad) Pvt Ltd. The textual, graphic, audio and audiovisual material in this site is protected by copyright law. You may not copy, distribute, or use this material except as necessary for your personal, non-commercial use. Any trademarks are the properties of their respective owners. More on Hyderabad, India. Jobs in Hyderabad.