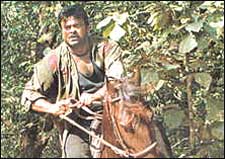 There isn't a single desi movie that has done tremendous business because of special effects (let's leave heroine Raasi out of this, okay?). The blame perhaps should rest on those goras and their technology bought with a gazillion dollars. Those guys can make our standard special effects even while picking their nose.

Not many people would accept this theory (mostly because I just made it up), but once you've seen the angrez at their richest best, you're not really as excited as the undertaker in a funeral when you see desi special effects. Anji is a living example of this theory. Special effects do not make a movie click, especially if they occupy more reel than Reema Sen and Ramya Krishna together. 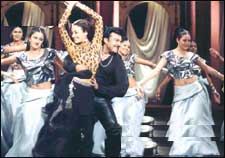 Several thousand years ago (for the teenagers, that's even before email was invented), Shiva's all-powerful Atma Lingam (a glowing idol with a yellow zero watt bulb in it) had been attempted at being conquered. It seems every 72 years it gets immense special effects (read magical powers) infused within it, and anyone who drinks from it (don't ask) will become immortal.

Anji (Chiru with a ruffian look that did not exactly make him win Ms. India in Mrugaraju) is generally helping people and having fun when Namrata Shirodkar comes in. He's then helping her and having fun. She basically gives them (him and the other tribals) all the dope about the Lingam and how it's hidden in the forest where Anji's tribe is camped.

With that news arrives the baddie to the forest. He forces Anji to go after the Lingam, by inflicting injury on one of Anji's adopted children, who can live only if he conquers that Lingam (a Jagadeka Veerudu Athiloka Sundari schtick).

Moreover, Anji's the only one who knows all the tricks of the trade, like when the background screen behind him will show a python and when the ground under him will disappear. All this info is passed onto him by an old wise man, namely the director.

So anyway, he finds the Lingam, saves the child and prevents the baddies from becoming immortal, all in one epic special effects display. Where Shiva actually shows his raw fury.

Despite the heroic efforts of the FX team, people will still remain hesitant towards fantasy cinema after Anji. "Hesitant" is a good attitude to have towards all things that you cannot tolerate - e. g. it would be accepted behaviour under social norms to say "I'm a bit hesitant about Udit Narayan's Telugu diction."

Chiru is seen in various physical degrees of transformations throughout the movie, making one believe that those were the special effects in the movie. Remember this movie took more time to make than an Atma Lingam cycle. But as usual, he's given Anji a perfect 10 acting-wise.

Everyone really wished the special effects would also take care of the expressions on Namrata Shirodkar. The animated doors knobs had more expression. The music and the choreography haven't much of a role to play, except for the first and the last songs. The real black sheep of the movie, however, is the editing. It goes straight into the manual of 'How Not To Edit A Movie.'

Looks like the makers of Anji wanted to recreate the magic of Jagadeka Veerudu Athiloka Sundari by infusing slick graphics. They would've succeeded, too, if not for the screenplay, the editing, the time length, the un-jointed scenes, the lack of Sridevi, the... the list is endless.

ADVERTISEMENT
This page was tagged for
anji telugu movie heroine photos
Anji movies
anji movies girl telugu
anji telugu movie
anji review keraf kancharapalem
Follow @fullhyderabad
Follow fullhyd.com on
About Hyderabad
The Hyderabad Community
Improve fullhyd.com
More
Our Other Local Guides
Our other sites
© Copyright 1999-2009 LRR Technologies (Hyderabad), Pvt Ltd. All rights reserved. fullhyd, fullhyderabad, Welcome To The Neighbourhood are trademarks of LRR Technologies (Hyderabad) Pvt Ltd. The textual, graphic, audio and audiovisual material in this site is protected by copyright law. You may not copy, distribute, or use this material except as necessary for your personal, non-commercial use. Any trademarks are the properties of their respective owners. More on Hyderabad, India. Jobs in Hyderabad.