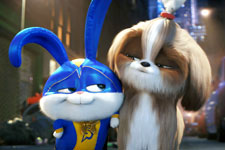 Punarvasu Pendse / fullhyd.com
EDITOR RATING
6.5
Performances
Script
Music/Soundtrack
Visuals
7.0
5.0
7.0
7.0
Suggestions
Can watch again
Yes
Good for kids
Yes
Good for dates
Yes
Wait to rent it
No
Given The Secret Life Of Pets gained a reputation as being Toy Story but with pets, Illumination (previously Illumination Entertainment) made the rather interesting choice of releasing the sequel just before Toy Story 4 hits the theatres. And the pleasant thing about The Secret Life Of Pets 2, for the adult audiences at least, is that unlike so many other movie franchises, it does not suffer from "sequel torpor".

Max (Patton Oswalt), the lovable terrier from the previous movie, is now firm friends with Duke (Eric Stonestreet), the mellow newfoundland. The new addition to the family is the newborn son Liam of Katie (Ellie Kemper), who quickly forms a bond with the two dogs, with Max especially willing to do anything to keep the baby safe. When Max and his family set out on a trip to the farm, he leaves his favourite toy, Busy Bee, with Gidget (Jenny Slate), the white Pomeranian who has a crush on him, for safekeeping. At the farm, Max learns important life lessons from an older, cooler sheepdog called Rooster (Harrison Ford).

Gidget needs to enlist the help of overweight cat Chloe (Lake Bell) to retrieve Busy Bee from the apartment of a crazy cat lady. Meanwhile, Chloe is approached by a Shih Tzu, Daisy (Tiffany Haddish), who requires the help of Captain Snowbell - the alter ego of whimsical rabbit Snowbell (Kevin Hart) - to locate and rescue a white tiger from a cruel circus owner. By the third act, the arcs of all the three primary characters - Max, Gidget, and Snowbell - converge, and the animals attempt to save the day before the humans get back.

The Secret Life Of Pets 2 feels like it should have been a mini-series. It has three different stories that come together (not without hiccups), and the plot isn't a particularly strong point in any of them. For example, the first few minutes of the movie build heavily upon the relationship between baby Liam and Max, which is hardly explored afterwards. Barring Max's farm story, the stories also seem rushed, and feel like they are just preparatory elements for the climactic scene. There is one scene at the farm, where Rooster pulls off the cone Max's vet has put on him to combat his nervousness, which seems a little problematic and sends the wrong message to kids, particularly in today's society which struggles to deal with mental health in a safe way.

Despite the obvious flaws we mentioned earlier, at no point does The Secret Life Of Pets 2 feel boring. It is harmless fun for the whole family - with cute visuals, snappy pacing (with a runtime of under an hour and a half), and easily relatable characters who personify particular human traits. Max, for example, is caring and emotional, while Snowball is daring, with a dash of vulnerability that makes him more endearing. The movie also manages to deliver a message to kids without sounding preachy (though the bit about animal cruelty that is associated with the circus tiger Hu is a little bit dark for kids).

Max's character progression from a nervous dog with a cone to a confident caretaker for Liam is showcased beautifully by Patton Oswalt. Oswalt definitely doesn't make you miss Louis C K (who was dropped from the franchise after he confessed to sexual misconduct). Eric Stonestreet voices the happy-go-lucky Duke perfectly, even if he gets less screen time than in the first movie.

The most memorable performance of the movie is by a certain newcomer called Harrison Ford (this is his first voice role in an animated film, at age 76 - proving why he is a legend). The other new entrant into the franchise, Tiffany Haddish, is equal parts fun and fire as the sprightly Shih Tzu Daisy. Kevin Hart is hilarious as Snowbell, and shoulders primary comic responsibility - something he does naturally. Jenny Slate reprises her role as the cutesy Gidget admirably, also showing you again the fiery side of the little Pomeranian, just like in the first movie.

Alexandre Desplat composed the score of the film, with a soundtrack featuring over twenty pieces of music that accentuates each different arc and helps bring a sense of cohesiveness to a movie that has three separate, simultaneous plots. Kevin Hart raps hilariously about a stuffed panda at the end of the film that genuinely makes you chuckle.

The Secret Life Of Pets 2 brings a little more to the table than its predecessor, while retaining its fun antics and cute animals. Kids are going to fall in love with it, no doubt, but this time there is a gentle show of support for the parents. The film subtly advocates against helicopter parenting, yet understands why parents feel so protective about their offspring. Give The Secret Life Of Pets 2 a watch, especially if you have kids - it is wholesome entertainment for the whole family.
Share. Save. Connect.
Tweet
THE SECRET LIFE OF... SNAPSHOT
THE SECRET LIFE OF PETS 2 (HINDI) SNAPSHOT 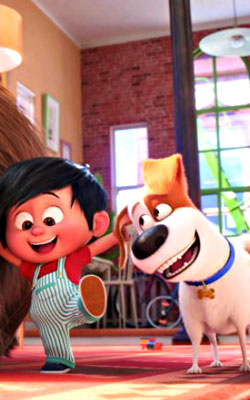