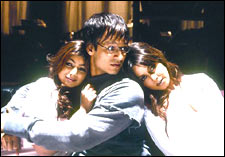 Ghazala Rizvi / fullhyd.com
EDITOR RATING
3.0
Performances
Script
Music/Soundtrack
Visuals
NA
NA
NA
NA
Suggestions
Can watch again
NA
Good for kids
NA
Good for dates
NA
Wait for OTT
NA
Home Delivery is a far call from the hottie-meets-a-chick kind of comic-flicks, which, if not splitting your sides, at least keep you sitting through the reel. Instead, it's like setting on a safari to hunt down a few kicks, and getting lost. Not because the plot is complex or fast-paced, but because it's so unhinged, moorless, and languid in execution.

Home Delivery is about Sunny (Viviek Oberoi), a Gyan Guru for the agony column of "Times Of Hindustan". He makes his dough by kneading out advice for all those trapped in love, marriage, divorce, pimples... The list of respite-seekers is long, and his solutions bizarre.

On the personal front, he has a live-in-by-parental-consent arrangement with Jenny (Ayesha Takia). While Jenny tries to make Sunny hear the wedding bells, all that testosterone coursing through his body makes him see marriage as a claustrophobic dead-pit.

On one of his writing trawls, Sunny bags an assignment for a script for Karan Johar's flick. Ms Maya (Mahima Choudhary), a South-Indian starlet on the prowl for big banners, runs into Sunny on a talk show. Or more likely, runs over him, as Sunny is silently taken over by this gorgeous siren.

The movie proceeds with Michael (Boman Irani) trying to get job of a home delivery 'boy' at Mummy's Pizza. Heavily bearded and sporting a pregnant paunch, Michael lands at Sunny's when the latter has set the stage for a rendezvous with Maya.

Like dandruff on a bad-hair-day, Michael will not leave him – insisting that delivering the customer from all enemies and problems is his duty. Pandey (Saurabh Shukla), with his new-biz plans, and Gungunani (Tiku Talsania), with his musical endeavours, are Sunny's neighbours who keep barging in on and off. And in all this fracas there is P3P (Arif Zakaria), a killer who thinks that the Page 3 gentry are foie gras, to be sliced and eaten.

The movie drags with repeated if not clichéd jokes, like Sunny's redundant Omega gimmicks on pizza delivery boys, Pandey's foray into Sunny's flat with the same old rigmaroles, and Michael's repeated attempts at being cute. After the first half hour, all this would have given you a sense of deja vu, had it not already become too tiring.

Home Delivery has long periods of lull when nothing happens (with Sunny nursing his writer's block at his computer), and humor that fails to lift your mood (Sunny dreaming of Maya, in a Sridevi-Jitendra Himmatwala jig). The movie is a little too rusty even for the younger crowds that it aims at. While Mahima looks oozing in oomph, and Ayesha is still her ever-sweet self, Vivek appears to have regressed from his Masti days. Boman is good, but the utter lack of speed in the plot is his handicap.

Not even cameo appearances from Juhi Chawla, Karan Johar and Naseeruddin Shah, and some racy music by Vishal Shekhar duo, can ensure a home run for this one.
Share. Save. Connect.
Tweet
HOME DELIVERY SNAPSHOT

ADVERTISEMENT
This page was tagged for
home delivery movie maya sin
Home Delivery hindi movie
Home Delivery reviews
release date
Viviek Oberoi, Mahima Choudhary
Follow @fullhyderabad
Follow fullhyd.com on
About Hyderabad
The Hyderabad Community
Improve fullhyd.com
More
Our Other Local Guides
Our other sites
© Copyright 1999-2009 LRR Technologies (Hyderabad), Pvt Ltd. All rights reserved. fullhyd, fullhyderabad, Welcome To The Neighbourhood are trademarks of LRR Technologies (Hyderabad) Pvt Ltd. The textual, graphic, audio and audiovisual material in this site is protected by copyright law. You may not copy, distribute, or use this material except as necessary for your personal, non-commercial use. Any trademarks are the properties of their respective owners. More on Hyderabad, India. Jobs in Hyderabad.