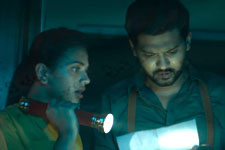 Neema Pramod / fullhyd.com
EDITOR RATING
7.0
Performances
Script
Music/Soundtrack
Visuals
8.5
7.0
7.0
6.0
Suggestions
Can watch again
Yes
Good for kids
Yes
Good for dates
Yes
Wait for OTT
No
If the word "detective" brings to mind an steely man in an overcoat and a hat, a cigarette between his lips and a determination in his walk, then you are in for a fun ride with Agent Sai Srinivasa Athreya - Telugu cinema's own Sherlock Holmes. Or rather, wannabe Sherlock Holmes.

Athreya (Naveen Polishetty) is a youngster who has set up a detective agency of his own named FBI - Fathima's Bureau of Investigation. The film opens with him training his new assistant Sneha (Shruti Sharma) by making her watch classic Hollywood detective thrillers. This scene sets the tone for the rest of the film - a good-natured parody of the genre, which slowly morphs into an intriguing whodunnit.

We follow Athreya as he struggles to make a mark as a detective and is stuck solving petty theft cases. However he never gives up and constantly comes up with new and innovative (and funny) ideas to realize his dream. Things finally change when one fine day he stumbles upon an unidentified dead body by the railway tracks. This body leads him into a web of lies, deceit and death from which he has to find a way out through his probing skills.

The best thing about Agent Sai Srinivasa Athreya is that it steers clear of the trappings of commercial movies. There are no stunt sequences where the hero sends the bad guys flying into outer space, nor are there any song-and-dance sequences. It is clear the kind of movie this one wants to be, and it becomes exactly that. And while it might not be as smooth or crisp as its Hollywood companions, it is not a film that can be easily dismissed.

A major chunk of the first half is spent poking some good-natured fun at the Hollywood detective trope, and these sequences offer generous laughs. However, it is later - when the actual case finally begins - that you realize that the movie has a few cool tricks up its sleeve. The series of twists and turns that follow can take you by surprise, keeping you hooked to the proceedings. And though the final reveal might initially feel a little far-fetched, you soon realize how there was a crumb-trail laid out before you all through.

Though at no point does Agent Sai Srinivasa Athreya underestimate your intelligence, you do wish that the movie had chosen to do more showing than telling. The film - especially in the investigative portions - is too dialogue-heavy, which gets a little tiring after a point. A little more of visual storytelling would have made the movie even more engaging.

Agent Sai Srinivasa Athreya still manages to be entertaining fare. And that is primarily because of one person - Naveen Polishetty. The man has impeccable comic timing, and leaves you in splits with his antics. With an eccentric character such as this one it would have been easy for him to go overboard, but Polishetty stays remarkably in control, establishing that he is here to stay. The fact that he co-wrote the film (along with the director himself) is yet more proof of his talent.

Giving him ample support is Shruti Sharma, as the Watson to his Holmes. For once, the heroine is not a damsel in distress who gets kidnapped and needs to be saved by the hero. She is an intelligent woman who has an occasional laugh at her boss' expense - and is never punished for it. There isn't even a romantic track between the two, yet her screen time is almost equal to that of the hero. The two leads are further supported by the rest of the cast, who all put in decent performances.

Technically, the film could use some polishing. Also, some scenes go on for longer than they should. The sub-plot about Athreya's mother is brilliant in theory, but the execution makes it feel out of place. The music, however, is apt.

Agent Sai Srinivasa Athreya might not be the greatest thriller ever made, but it gets an A for the effort the makers have put in coming up with something new. It offers a lot of laughs, a solid mystery, and a great new talent in the form of Naveen Polishetty. Most importantly, movies like this make you believe that in the hands of promising new talent like this, the future of Telugu cinema is safe.
Share. Save. Connect.
Tweet
AGENT SAI SRINIVASA ATHREYA SNAPSHOT 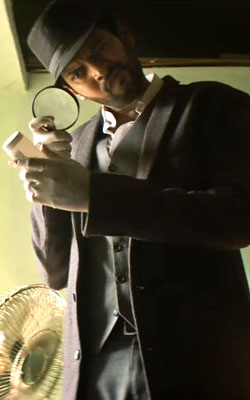