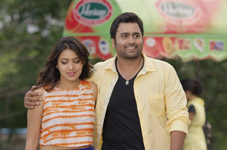 Josh / fullhyd.com
EDITOR RATING
4.0
Performances
Script
Music/Soundtrack
Visuals
4.0
4.0
5.0
7.0
Suggestions
Can watch again
No
Good for kids
No
Good for dates
No
Wait to rent it
Yes
Five friends (Vennela Kishore and Pujitha Ponnada prominent among them) have a brush with divination in the woods of the Anantagiri hills where a blue-eyed sage hands them the newspaper of four months hence. Following the news in that paper, they set about to find a guy who's destined to win a boxing championship and fetch five crore rupees to his sponsors.

They find Raju (Nara Rohit) who has practically no redeeming features to him and push him to take up boxing. As is wont to happen with someone who's so good at being good for nothing, Raju takes no interest in learning boxing or succeeding at it. That is, until he falls in love with Siri (Latha Hegde).

Tuntari (an official remake of Tamil film Maan Karate) belongs to the class of films whose hero is jobless, aimless and pointless, but is a hero nevertheless. That he is of no use or talent is the very crown that adorns his dim head. Then, the film gets its hero to fall in love with a fair face who incites the urge in him to succeed and win her. Which he does with a song montage of his efforts.

This is the kind of hero who can give you an existential crisis where you wonder why you spent all those years slogging it out for your degree, your job, your bonus, and even your vacation(!) when all it takes is falling in love with a Fair 'n' Lovely model. Such a role needs a young guy who can pass off this aimlessness as cool and his love as a passion that's deeper than Vijay Mallya's pockets. He needs to sell his purposelessness, and pain, to hook you on to his fortunes.

The glitch is that Nara Rohit can't pull off that kind of cool. Nor that kind of passion. He appears like he'd never been young. Like a fresher who doesn't get ragged because he's mistaken for a final year student, there's something about him that suggests a seriousness and lack of mirth. This isn't an indictment of his acting capabilities. The guy can act well, but as of now he just hasn't got the mental flexibility to play cool or even believe that the role he is playing is cool. When he doesn't believe it, we aren't getting on that train either.

So when he essays this cool oaf, we fidget a bit. When he starts enacting the cool oaf who woos a girl (with an instrument that we can't access in real life - a script), we begin to wish he left the girl alone and continued being just a cool oaf. Lastly, when he suffers a turnaround and tries to become a boxer despite having no definition of a bicep, we wish he dropped that and went back to flirting with that girl. At least she behaves like she deserves it.

Well, let's forget Rohit's performance. He is usually liked for his choice of scripts. Whether it is Baanam or Solo or Asura, the common factor you'll see is they aren't run-of-the-mill. He picks these interesting scripts and gets them made. Tuntari (as its Tamil original) is also an interesting story (by Murugadoss) because of the inclusion of the supernatural in it. And a nice underdog story is always up anyone's alley.

But this story gets a script very half-baked, and an execution that didn't make it to the oven. There's about an hour of "romance" whose function seems to be to take the film downhill with greater acceleration at every song. And the last half-hour is stuffed with "emotion" where Raju suddenly bonds with his father, and suddenly decides to become a champ and engages in a training schedule where he does a suspicious pull up (you only see him chest up - likely because the assistant directors are holding his legs). Authenticity-wise, if you watched Saala Khadoos twice and never raised a finger to practice, you'd still have better technique than any of the "boxers" shown in the film.

What works for the film is a bit of comedy with substantial efforts from Shakalaka Shankar, Vennela Kishore and Rohit himself (he doesn't fit but it isn't that he doesn't try). Further, the supernatural aspect is rather nicely done with good work from the cinematographer (Palani Kumar). The music (Sai Karthik) is passable, but it is the abundance and needlessness of songs that is bothersome.

The reasons why Maan Karate, the Tamil original, was a hit were the leads and the peppy music. Sivakarthikeyan was a comedian for a decade and so he fit that mould of a goof, and it worked as a breakthrough for him when he went serious and punched sandbags. And Hansika Motwani is the chosen object of affection for many a Tamil man. By this argument what Tuntari needed was Sunil and Rakul Preet, not Nara Rohit and an obscure Miss IndiaNZ.

If you are interested in being mildly entertained or if you're a fan, Tuntari could work for you. If you're, however, looking for the kind of interesting films that Nara Rohit usually indulges in, let this one be. He apparently has eight films coming up (as per Wikipedia), and it is likely some of them will hold your interest.
Share. Save. Connect.
Tweet
TUNTARI (2016) SNAPSHOT 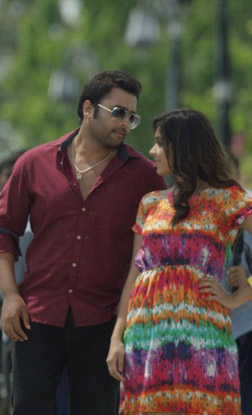 ADVERTISEMENT
This page was tagged for
Tuntari (2016) telugu movie
Tuntari (2016) reviews
release date
Nara Rohit, Latha Hegde
theatres list
Follow @fullhyderabad
Follow fullhyd.com on
About Hyderabad
The Hyderabad Community
Improve fullhyd.com
More
Our Other Local Guides
Our other sites
© Copyright 1999-2009 LRR Technologies (Hyderabad), Pvt Ltd. All rights reserved. fullhyd, fullhyderabad, Welcome To The Neighbourhood are trademarks of LRR Technologies (Hyderabad) Pvt Ltd. The textual, graphic, audio and audiovisual material in this site is protected by copyright law. You may not copy, distribute, or use this material except as necessary for your personal, non-commercial use. Any trademarks are the properties of their respective owners. More on Hyderabad, India. Jobs in Hyderabad.