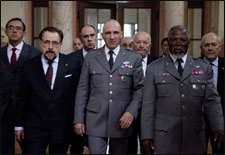 Nupur Barua / fullhyd.com
EDITOR RATING
7.0
Performances
Script
Music/Soundtrack
Visuals
7.0
8.0
8.0
7.0
Suggestions
Can watch again
Yes
Good for kids
No
Good for dates
No
Wait to rent it
No
William Shakespeare can never go out of fashion, and filmmakers across the world, from Kurosawa to our own Vishal Bharadwaj, have made a profit from the Bard's work. Fact remains that the body of work attributed to Shakespeare is timeless, and relevant, at any point, to human history.

The Bard was versatile when it came to genres, but it is a given that his tragedies were his most powerful works. And amongst these tragedies, overshadowed by better-known masterpieces such as Macbeth, Julius Caesar and Hamlet, is a gem known as Coriolanus. This play is not as widely produced as the others, but a few discerning readers, all successful in their own right, have called it one of Shakespeare's greatest (if not the greatest) achievements.

One of these astute men is Ralph Fiennes, who picked up the play, adapted it to modern times, and directed it as a movie named (what else but) Coriolanus. And then, he cast himself in the title role, probably because he knew that he would be the only one to do justice to the story of a patriotic, contemptuous, seemingly heartless soldier, who sticks by his beliefs and does not play to the mob.

War-ravaged Rome is hungry, and the food shortage has driven the common man crazy. The people protest and picket, and Caius Martius (Ralph Fiennes) is the man to handle the chaos.

His loyalty to his country's government, and his emotionless countenance, make him a tyrant, whom the crowd loves to hate. Two tribunes, Sicinius (James Nesbitt) and Brutus (Paul Jesson), wait for an opportunity to bring about the downfall of the man, who becomes more powerful with each passing day.

In the meantime, the Volscian army, led by Martius' sworn enemy, Tullus Aufidius (Gerard Butler), is on its way to seize Rome. Martius fights bravely, saves Rome, and is given the name Coriolanus (for capturing the Volscian city of Coriole).

His proud and ambitious mother, Volumnia (Vanessa Redgrave), pushes her son into the limelight of politics, and the unpredictable mob approves. Till the conspiring Sicinius and Brutus incite the mob against him.

Screenplay writer John Logan has taken the essence of Coriolanus, Shakespeare's longest and most violent play, and has come up with a tight plot that runs a couple of minutes over 2 hours. There is no relief in the screen adaptation, and one heavy sequence leads into another, leaving no room to breathe. This technique can either keep your senses alert and heart pounding, or it can tire you.

Even the visuals are relentless and awe-inspiring. Barry Ackroyd's cinematography captures the grunge as well as the opulence of modern-day Rome. The one-on-one fight sequence between Coriolanus and Aufidius is long and tedious, and even if you know the story, it will leave you breathless. So is the Coriole siege sequence.

Ralph Fiennes is Coriolanus. Whether it is his bald head and the impressive army uniform, or the dishevelled exile look, or just a Voldemort hangover, the man fills the screen with his dialogue delivery and body language. His eyes speak volumes, and even when he is lashing out one of the few monologues that he has, spitting and all, he has the audience riveted.

In comparison, Gerard Butler pales a bit in comparison to lead actor, even though he does not fare too badly. The Castro look and Scottish accent never looked better than it does on Butler, but he has relatively less screen time, and is also overshadowed by the presence of Fiennes.

However, despite such a strong male cast, it is Vanessa Redgrave who walks away with the best portrayal of Volumnia, ever, as even loyal Shakespearians will agree. The scenes between Fiennes and Redgrave are high-voltage drama at its best.

Actually, all the actors do their bit well. Brian Cox as the family guide and friend is good, as is James Nesbitt as the scheming Sicinius. The only disappointment is Jessica Chastain, but then, the character of Virgilia was never supposed to be as impressive as, say, a Portia or a Lady Macbeth. She has to look good, and that is all she does.

The only thing wrong with the movie, Coriolanus, is the language. The Bard's English is neither widely spoken nor understood in this country, and fans of the 2 actors may be disappointed if they are unable to comprehend what the hullaballoo is all about. Maybe subtitles in normal English would help; otherwise the audience will be limited to literature students and pretentious intellects.
Share. Save. Connect.
Tweet
CORIOLANUS SNAPSHOT

ADVERTISEMENT
This page was tagged for
coriolanus movie review
Coriolanus english movie
Coriolanus reviews
release date
Ralph Fiennes, Gerard Butler
Follow @fullhyderabad
Follow fullhyd.com on
About Hyderabad
The Hyderabad Community
Improve fullhyd.com
More
Our Other Local Guides
Our other sites
© Copyright 1999-2009 LRR Technologies (Hyderabad), Pvt Ltd. All rights reserved. fullhyd, fullhyderabad, Welcome To The Neighbourhood are trademarks of LRR Technologies (Hyderabad) Pvt Ltd. The textual, graphic, audio and audiovisual material in this site is protected by copyright law. You may not copy, distribute, or use this material except as necessary for your personal, non-commercial use. Any trademarks are the properties of their respective owners. More on Hyderabad, India. Jobs in Hyderabad.