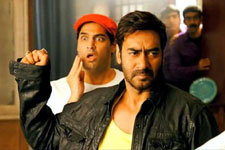 Nupur Barua / fullhyd.com
EDITOR RATING
6.0
Performances
Script
Music/Soundtrack
Visuals
7.0
4.0
5.0
7.0
Suggestions
Can watch again
No
Good for kids
No
Good for dates
Yes
Wait for OTT
Yes
You cannot expect anything new in terms of storytelling and filmmaking from a movie like Action Jackson. Watch the trailer, and you will find similarities between this and recent releases such as Boss, Rowdy Rathore, Dabangg, R... Rajkumar... you get the drift. Note that Sonakshi Sinha is the single common factor to all. Also note that most of her movies are superhits.

However, that is just a coincedence - the film revolves not around Sonakshi Sinha but around Action Jackson, a.k.a. AJ, a.k.a. Jai (Ajay Devgn). And Vishi (also Ajay Devgn). The latter is a small-time goon with a heart of gold. He may not be so popular in decent society, but he proves to be lucky for Khushi (Sonakshi Sinha). Ever since she accidently stumbles upon an undressed Vishi, her stars align to get rid of all the obstacles that she has faced so far. She considers him her lucky mascot, and becomes obsessive about keeping him in her sight.

In the meantime, somewhere else in the world, also known as Bangkok, Xavier Fonseca (Anantharaj) is a don. His sister Marina (Manasvi Mamgai) is a free-spirited and somewhat promiscuous young woman. She is not too intimidated when Xavier's enemies kidnap her, but immediately becomes fascinated by AJ, the man whom her brother sends to rescue her. She makes her interest in him very clear, but he rejects her, which leads to her obsession with him.

All very complicated, but this is just the beginning. One of them has a wife, Anusha (Yaami Gautam), and besides, AJ and Vishi have yet to come face to face. And when that happens, all hell breaks loose, as the two men try to sort out all that is wrong in their lives, and in society.

This is by no means a novel story, but you have to admit that the AJ-Vishi angle makes you curious. What are they going to do when they get together, if at all? The advantage with Action Jackson is that despite the predictable action, dialogues, songs and script, you never really know which way the plot points will turn.

The characters are stereotypical, and that helps the story progress. Their existence does not affect the twists and turns of the screenplay. They are walking clichés, and sadly, the love angles in the movie lack the passion and chemistry required. Another alarming exception to the otherwise dull characters is the portrayal of women. In this movie, they are beaten black and blue, and while you may be all for gender equality, the misogyny is pretty shocking.

Ajay Devgn is happy with his action sequences in Action Jackson. He does not try too hard to come across as a sincere actor, given that this is a role he can play with his eyes closed. Unfortunately for him, his dancing is a disaster. This affects his ability to be his otherwise witty self. He looks uncomfortable, to say the least.

Sonakshi Sinha is Sonakshi Sinha. Enough said. Yaami Gautam deserves better roles. Anantharaj makes his debut, in Hindi films, as a villain, and is quite entertaining. Kunaal Roy Kapur as AJ's sidekick is completely wasted. The surprise element in the cast is Manasvi Mamgai - you cannot take your eyes off of her when she is in the frame, and that has nothing to do with her skimpy costumes.

Most action movies have a set template for production and costume designs, and Action Jackson is no exception to the rule. What sets the movie apart from others of its ilk is the lighting, especially during the action sequences. Here, most of the action takes place in depressing, gloomy, rainy settings, and while this becomes a pattern, it is still intriguing. Of course, the movie also has the usual anti-gravity action that is mandatory - cars flying, et al.

The music is startling, to say the least. It does not help that the songs are inserted unexpectedly in situations where you least expect them. While Himesh Reshammiya's touch is obvious, there is not much that can be termed innovative in the soundtrack. As for the editing - it cannot be the editor's fault that the screenplay demands certain sequences need to be played out, and therefore stretch the movie for much longer than necessary.

Action Jackson does not need endorsement. The film regulars who enjoy this genre will watch it regardless of feedback. This movie, too, may cross the not-so-elusive 100-crore mark. Watch it if you are a __________ (insert any Prabhu Dheva / Rohit Shetty / Salman Khan / Ajay Devgn / Akshay Kumar action flick name here) fan, and just need to be entertained. Be warned, however, that the songs and the action can get pretty loud.
Share. Save. Connect.
Tweet
ACTION JACKSON SNAPSHOT 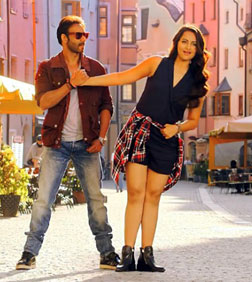 ADVERTISEMENT
This page was tagged for
action jackson movie in hindi
Action Jackson hindi movie
Action Jackson reviews
release date
Ajay Devgn, Sonakshi Sinha
Follow @fullhyderabad
Follow fullhyd.com on
About Hyderabad
The Hyderabad Community
Improve fullhyd.com
More
Our Other Local Guides
Our other sites
© Copyright 1999-2009 LRR Technologies (Hyderabad), Pvt Ltd. All rights reserved. fullhyd, fullhyderabad, Welcome To The Neighbourhood are trademarks of LRR Technologies (Hyderabad) Pvt Ltd. The textual, graphic, audio and audiovisual material in this site is protected by copyright law. You may not copy, distribute, or use this material except as necessary for your personal, non-commercial use. Any trademarks are the properties of their respective owners. More on Hyderabad, India. Jobs in Hyderabad.