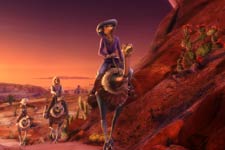 A French production, Cinderella 3D has anthropomorphic characters playing out the roles from the famous fairy tale, Cinderella. In the original story by the Grimm Brothers, a young girl is reduced to becoming a kitchen maid in her own house, by her cruel stepmother and stepsisters. With a little help from her fairy godmother, she goes to the Prince's ball, but runs away before midnight, leaving a glass slipper behind. The Prince then goes on a fitting spree, and finally finds the real owner of the shoe. They live happily ever after.

In this version, Cinderella is no wimp. She is a resident of the Wild Wild West, and as tough as nails. Her stepmother, Felicity, is the godmother of the town, and she cannot get along with Cinderella. And then there are the pirates, who are looking for the big loot.

Into this town comes Prince Vladimir, with his mother, and Felicity decides to host a ball in their honour. While she tries to get the prince to marry one of her two ugly, clumsy daughters, Vladimir has his own idea of the perfect girl. Cinderella is not invited to the ball, but with the help of a shaman, she manages to look presentable enough to appear as the mysterious masked woman at the ball.

The prince and the masked girl form a bond, but a fight ensues, and Cinderella loses a tooth. Now Vladimir has to find the woman before she disappears from his life for good.

The story, while sticking to the basic premise of the folk tale, deviates in its setting and its characters, and that is where the problem begins. A French tale, set in the USA, with Spanish music and pirates - that is enough of a mess already.

Besides, the anthropomorphism is very confusing - how does, for example, Prince Vladimir (a dog, to the naked eye at least) have a mother who is a bird? What species is Cinderella exactly? And who are all the various monstrous other creatures, especially the shaman? The absence of cuteness in these animated characters is enough to distract you from the story.

The dialogues do not help either. The various accents that the creatures adopt make the whole movie a nightmare for the ears. The worst, of course, is the protagonist herself. She does not evoke the slightest bit of sympathy in the audience. She comes across as a self-absorbed young girl who misses her mother when it is convenient and becomes coy when she is dressed up. This lack of honesty in the main character is what pulls the movie down.

While the animation is near perfect, there is nothing fresh about it. The use of colours and landscapes has not been edited well enough to make it seem like a superior product. In fact, the movie hurts the eyes at times, and looks like a low-budget animation feature from the 1980s, what with its gaudy backdrops and hues.

If you want a fresh look at this popular fairy tale, revisit some of the earlier versions in film. Better yet, let your child read the original. Cinderella 3D will baffle your child's (and your) mind, and may put him or her off fairy tales forever.
Share. Save. Connect.
Tweet
CINDERELLA (3D) SNAPSHOT 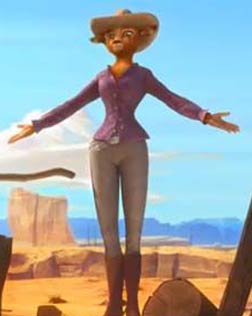 ADVERTISEMENT
This page was tagged for
Cinderella (3D) english movie
Cinderella (3D) reviews
release date
Yolande Moreau, Michel Boujenah
theatres list
Follow @fullhyderabad
Follow fullhyd.com on
About Hyderabad
The Hyderabad Community
Improve fullhyd.com
More
Our Other Local Guides
Our other sites
© Copyright 1999-2009 LRR Technologies (Hyderabad), Pvt Ltd. All rights reserved. fullhyd, fullhyderabad, Welcome To The Neighbourhood are trademarks of LRR Technologies (Hyderabad) Pvt Ltd. The textual, graphic, audio and audiovisual material in this site is protected by copyright law. You may not copy, distribute, or use this material except as necessary for your personal, non-commercial use. Any trademarks are the properties of their respective owners. More on Hyderabad, India. Jobs in Hyderabad.