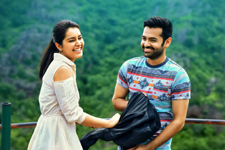 Ravi Kandala / fullhyd.com
EDITOR RATING
3.0
Performances
Script
Music/Soundtrack
Visuals
6.0
3.0
3.0
7.0
Suggestions
Can watch again
No
Good for kids
No
Good for dates
No
Wait to rent it
No
Hyper begins with the birth of Surya (Ram). Surya's father Narayana Murthy (Satyaraj) is warned right in the beginning that Surya will love him so much that he will be unable to tolerate that love.

The movie then shows us various vignettes from the boy's childhood to the time he becomes an adult that showcase his obsessive love for his father. Each of them is worse than the previous one. Then comes a scene wherein Narayana Murthy meets a girl Bhanumathi (Rashi Khanna) in a temple and says that whichever house she goes to will be lucky. Surya immediately decides that he will marry that girl. He, however, does not manage to see her face, and only sees her from behind. He then tells his friends that he had a connection when he saw the girl's, um, back, and that he would go around Vizag looking at the backs of girls until he feels the connection again.

He and his loyal friends, who "back" him up in all his endeavours, go around the city ogling and photographing girls from behind. Surya meets Bhanumathi accidentally and gets close to her. Later when he finds out that she is the same girl that his father met, he asks her to turn around and walk away from him. He then ogles at her back, feels the connection, and calls her back so that he can immediately go into a dream duet mode. This is half of the first half of Hyper.

We at fullhyd.com do not normally write out such detailed plot descriptions, and definitely do not call out individual scenes like this. Hyper, however, takes the levels of idiocy so high that we felt the need to give you a detailed and strong warning. And if the "back" concept does not scare you off, then head to the nearest theatre screening Hyper.

The remaining portions of Hyper deal with how a minister Rajappa (Rao Ramesh) takes it upon himself to get a file signed by Narayana Murthy and how Surya protects his family and his father's honor by taking on the minister. The real rivalry begins only after the interval, and the game of cat and mouse is stretched out for so long that we were looking at our watches for longer than we were watching the screen.

Hyper is utterly unwatchable right from scene one. The comedy isn't funny, the action scenes are routine, the songs are forced, the love story is clichéd and the emotions are over the top. Santosh Srinivas picks up an oft-repeated storyline and follows masala movie clichés to the T, and makes an even more boring movie than his previous outing Rabhasa.

Ram does his hyperactive shtick but it is tough to see him suddenly utter punch dialogues and turn into a human-bashing machine at the drop of a hat. His usually impressive dances are also missing in this one. Rashi Khanna sheds her inhibitions and clothes, and gives the front-benchers ample joy. Satyaraj and Rao Ramesh act wonderfully, but the rest of the cast is underutilized.

Ghibran's music is forgettable. The film has good technical values, and the producers seem to have spent a decent amount of money as is evident from the fact that they brought in actors like Chandramohan, Naresh, Suman and Sayaji Shinde to play bit parts.

14 Reels is the banner that produced the dud Aagadu with Mahesh Babu while Santosh Srinivas' previous outing was Rabhasa. Both of them, clearly haven't learnt their lessons. Stay away from this one!
Share. Save. Connect.
Tweet
HYPER SNAPSHOT 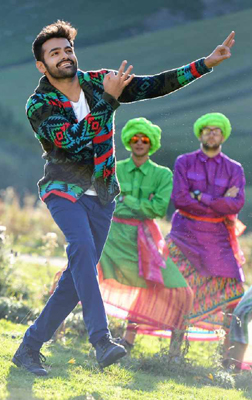 ADVERTISEMENT
This page was tagged for
Hyper telugu movie
Hyper reviews
release date
Ram, Rashi Khanna
theatres list
Follow @fullhyderabad
Follow fullhyd.com on
About Hyderabad
The Hyderabad Community
Improve fullhyd.com
More
Our Other Local Guides
Our other sites
© Copyright 1999-2009 LRR Technologies (Hyderabad), Pvt Ltd. All rights reserved. fullhyd, fullhyderabad, Welcome To The Neighbourhood are trademarks of LRR Technologies (Hyderabad) Pvt Ltd. The textual, graphic, audio and audiovisual material in this site is protected by copyright law. You may not copy, distribute, or use this material except as necessary for your personal, non-commercial use. Any trademarks are the properties of their respective owners. More on Hyderabad, India. Jobs in Hyderabad.