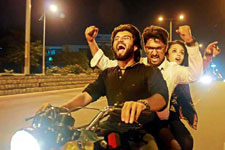 Ravi Kandala / fullhyd.com
EDITOR RATING
7.0
Performances
Script
Music/Soundtrack
Visuals
8.0
7.0
5.0
7.0
Suggestions
Can watch again
Yes
Good for kids
No
Good for dates
Yes
Wait to rent it
No
Nani, in an interview, talks about how he grew up in Ameerpet and how becoming an actor/hero is a huge thing for him. Maybe it is his middle class roots, but Nani is so convincing when he plays a boy-next-door. When he attempts to fill in the shoes of an over-achiever who is flush with money and is in the process of buying a villa in an exclusive gated community, he isn't that convincing. When he wears business suits and goes about clinching business deals, he isn't convincing. The moment he realizes he isn't cut out for that world and reverts to being the boy-next-door, it is like he's a transformed actor.

Yevade Subramaniam, the actor's latest outing, shows how a young man obsessed with money realizes that there are several things in life that money can't buy and are more valuable than anything that can be bought by a wad of notes. The role comes almost naturally to Nani - he looks supremely uncomfortable in the initial part of the movie, almost like he's acting out a part that he is unaccustomed to, and supremely comfortable in the second part of the movie, almost like he's not acting but living the part. The movie is as much Nani's journey as that of Subramaniam.

Plot-wise, Subramaniam aka Subbu (Nani) is a young man who is on his way to becoming the GM of the company he works in. He is engaged to his boss' daughter and is one step away from success. He is on the verge of acquiring Ramayya Industries for his boss. A day before the final acquisition, the deal falls through and his entire career falls into jeopardy.

Subbu tries to set things right when his childhood friend Rishi (Vijay Deverakonda) turns up at his doorstep. Rishi asks Subbu to accompany him on a trip to Dudh Kashi in the Himalayas to realise a childhood dream. Rishi says he will if he can clinch the deal. They meet a girl Anandi (Malavika Nair) at a drinking joint one night and decide to take her along. What happens next forms the crux of the remaining movie.

Yevade Subramaniam has some seriously good laugh-out-loud moments which have the entire cinema in splits. The deepest of philosophies is conveyed in simple words, and Nani's transformation is shown gradually through the second half instead of via one aha moment, making it that much more believable. The second half mopes around a bit before finding its feet firmly towards the end. The songs play out in the background, but could have been avoided.

The film revolves around the three main leads, and all three of them put in excellent performances. Nani, as we mentioned earlier, almost goes through a personal catharsis and turns more and more believable as the movie progresses. Rishi Devarakonda has a small role, but is effective. Malavika Nair turns progressively gorgeous as the movie progresses, and plays her role effectively. Her resemblance to Shobhana in some angles is eerily striking.

The film is technically superior. It is shot beautifully, be it at the iGate dome in Hyderabad or the secret lake in Dudhsagar. We could nitpick that the shots in the Himalayas could've been better, but the unit was obviously working with the limited equipment that they could carry to those altitudes.

Yevade Subramaniam is your best bet this Ugadi. We haven't seen the other Nani release yet, but we're quite sure this one will turn out better. It is young and fresh and fun and a must-watch.
Share. Save. Connect.
Tweet
YEVADE SUBRAMANYAM SNAPSHOT 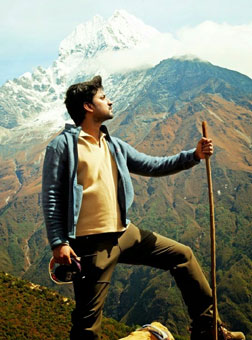 See Yevade Subramanyam full details
YEVADE SUBRAMANYAM USER REVIEWS
1 - 1 OF 1 COMMENTS
POSITIVE  |  NEGATIVE |  NEWEST  |  OLDEST  |  MOST HELPFUL  |  LEAST HELPFUL
USER RATING
9.0
1 USER
Performances
Script
Music/Soundtrack
Visuals
NA
NA
NA
NA
Can watch again - NA
Good for kids - NA
Good for dates - NA
Wait to rent it - NA
Hari on 23rd Mar 2015, 5:17am | Permalink
Just came from watching this movie. Mighty satisfied. A movie that is witty, funny and philosophical. All round supreme performances. Nani as usual just nailed his part. He is one of the finest actors we have got at the moment(sharvanand and srini avasarala are others that come to mind). May we get to see more from such talented actors. Malavika did not have much scope to perform but she was pretty good too (and beautiful). Vijay could become another fine actor if he chooses his roles well. Writing is spot on with some great moments.
Second half had weak narration here and there but that can be forgiven in the larger scheme of things.


>>>>
The songs play out in the background, but could have been avoided.
>>>>
My thoughts are quite the opposite from this view. I thought songs in second half elevated several scenes. Esp Idera song with its rousing tune over Himalayan backdrop gave me goose bumps!!! It's a pity Mohit Chauhan completely butchered the lyrics that had great philosophy. How I wished a telugu singer to have sung that song. However, the tune more than made up in lifting the spirit. Fabulous tune. Maestro's thendral vanthu rework as Challa Gaali was perfect for the situation. And Harini's sweet voice in O Kala was like dripping honey. Makes you feel really good.

Movies like these are a savior among the junk that gets dished out from TFI every month. It's like finding water in desert. Savor this.

ADVERTISEMENT
This page was tagged for
yevade subramanyam vijay honeymoon joke
Yevade Subramanyam telugu movie
Yevade Subramanyam reviews
release date
Nani, Malavika Nair
Follow @fullhyderabad
Follow fullhyd.com on
About Hyderabad
The Hyderabad Community
Improve fullhyd.com
More
Our Other Local Guides
Our other sites
© Copyright 1999-2009 LRR Technologies (Hyderabad), Pvt Ltd. All rights reserved. fullhyd, fullhyderabad, Welcome To The Neighbourhood are trademarks of LRR Technologies (Hyderabad) Pvt Ltd. The textual, graphic, audio and audiovisual material in this site is protected by copyright law. You may not copy, distribute, or use this material except as necessary for your personal, non-commercial use. Any trademarks are the properties of their respective owners. More on Hyderabad, India. Jobs in Hyderabad.