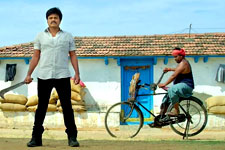 Neema Pramod / fullhyd.com
EDITOR RATING
2.0
Performances
Script
Music/Soundtrack
Visuals
2.0
1.0
1.0
2.0
Suggestions
Can watch again
No
Good for kids
Yes
Good for dates
No
Wait for OTT
Yes
Someone wise once said, "It's harder to make someone laugh than it is to make them cry." Vajra Kavachadhara Govinda is a great example. Though everyone associated with this movie bends over backwards to make you laugh, you end up going home with tears streaming down your cheeks - mourning the loss of 143 minutes from your life which you will never get back.

To be fair, the movie does start on a somewhat promising note. Govind (Saptagiri) is an unlucky thief whose life takes a turn when he is entrusted with the task of uncovering a treasure hidden in an ancient temple. In order to do so, he and his companions masquerade as fake godmen. After some "comedy", the customary romance, and the hero's emotional flashback, Govind and co finally uncover the treasure - a diamond.

Govind takes the diamond to his village for safekeeping while the rest of them try to find a good bargain. They soon find one, but to their horror, they discover that Govind now has no recollection of his past.

Though the first half is riddled with silly jokes featuring amateurish CGI, followed by a clichéd flashback that sets up the hero as a misunderstood saviour, it does not become unwatchable. In the second half, however, the film completely loses the plot, and you become as frustrated as the people around Govind - the only difference being that they are waiting for him to regain his senses, while you are in danger of losing yours.

Forget that the second half is about as funny as watching paint dry - you can still survive that. What is really horrifying is how offensive the movie gets after this point. Racism? Almost everything that comes to your mind when I use this word can be seen in the film - wait for the scene with the Malayalee women doing ayurvedic treatment on the hero. Mocking mental health issues? Well, that is pretty much the entire second half, really. And of course, how can one forget misogyny? Every week there is a film that makes you think no other film ever treated women worse. Every week.

Let me elaborate. In Vajra Kavachadhara Govinda there are two prominent female characters. One is the heroine Tripura Sundari (Vaibhavi Joshi). She starts off as a woman who punches the living daylights out of men who dare to make a pass at her. But of course, her embarrassed parents drag her to our fake godman Govind, who soon tames her in a fashion a la Bahubali - but making her dress up like a "true woman" and showing her a mirror. That is all it takes for her to transform into a demure woman in love.

The second woman is Prasanna Lakshmi (Archana) - a cunning MLA who is stripped off her arrogance when our hero "saves" her in the climax. In addition, there is some sort of an item number as well - featuring two women who throw themselves over Govind, all but drooling over him. Only the women who appear as mother-like figures escape unscathed, as is always the case.

The performances do nothing to save the film. Saptagiri is okay in the comedy scenes, but oversells every other emotion. The overblown attempts to transform him into an action-hero are perhaps the only moments that will make you laugh. Vaibhavi Joshi, Archana and almost every other actor give him tough competition in the overacting department. Also, everyone in the movie is so loud that you fear for your eardrums.

The direction and the editing are a disaster, especially in the second half. The movie goes on for far too long, and really tests your patience. The transition from one scene to another is very abrupt. The visual effects, as we already mentioned, are sub-par. As for the music, it is mostly bad, and when it is not, it is heavily inspired from other movies.

Overall, Vajra Kavachadhara Govinda is an unfunny, offensive and senseless comedy that you are better off skipping. The trailer promised a treasure-hunt, but what you are still hunting for at the end of 143 minutes is the plot. And your sanity.
Share. Save. Connect.
Tweet
VAJRA KAVACHADHARA GOVINDA SNAPSHOT 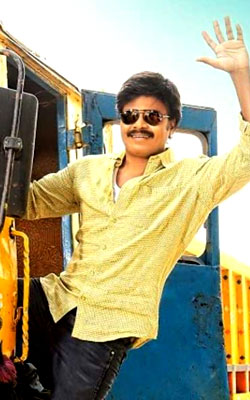 ADVERTISEMENT
This page was tagged for
vajra kavachadhara movie scenes
vajra kavachadhara govinda full movie climax scene
Vajra Kavachadhara Govinda telugu movie
Vajra Kavachadhara Govinda reviews
release date
Follow @fullhyderabad
Follow fullhyd.com on
About Hyderabad
The Hyderabad Community
Improve fullhyd.com
More
Our Other Local Guides
Our other sites
© Copyright 1999-2009 LRR Technologies (Hyderabad), Pvt Ltd. All rights reserved. fullhyd, fullhyderabad, Welcome To The Neighbourhood are trademarks of LRR Technologies (Hyderabad) Pvt Ltd. The textual, graphic, audio and audiovisual material in this site is protected by copyright law. You may not copy, distribute, or use this material except as necessary for your personal, non-commercial use. Any trademarks are the properties of their respective owners. More on Hyderabad, India. Jobs in Hyderabad.