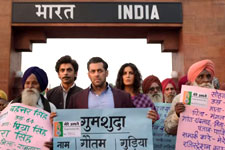 T J Reddy / fullhyd.com
EDITOR RATING
5.0
Performances
Script
Music/Soundtrack
Visuals
7.0
3.0
7.0
8.0
Suggestions
Can watch again
No
Good for kids
Yes
Good for dates
Yes
Wait for OTT
Yes
There is a sign that displays Bhai's level of involvement in a film, and we think we've cracked the code. If Bhai chooses to care about a project, his gaudy bracelet comes off. If he chooses to sleepwalk through a film a la Race 3, it firmly stays on come what may. We haven't dared to watch every single Bhai movie in order to confirm this theory beyond a shadow of a doubt, but we can still assure you that this theory might hold more water than the laws of physics accompanying any and every piece of Bhai-powered cinema.

To our relief, Bhai's bracelet was nowhere to be found in his latest film. But that only signifies that he's trying. He's but the central piece of a gargantuan mosaic that, if constructed poorly, can easily overshadow his efforts.

The mosaic titled Bharat lays its first tile by transporting us to 2010's Delhi where a suit-clad 70-year-old title character (Salman Khan) damn near kills a man who so much as thinks about bulldozing his humble ration store. More tiles are laid when Ali Abbas Zafar's film tells us why this ration store is so very integral to Bharat's very identity.

At the tender age of 8, Bharat and his family fled the soon-to-be-Pakistan during the partition. Before going back to retrieve his daughter / Bharat's sister, Bharat's father (Jackie Shroff) entrusted the responsibility of his family to his son. Bharat vows to keep the family united and under the roof of his aunt's ration store until his father arrives. Because we can't have a film where the main character sits in one location for a duration of 167 minutes, the movie has him go through a whole host of adventures while travelling the world.

Every adventure Bharat embarks upon is a fresh tile added to an increasingly crowded mosaic. He joins the circus as a stunt performer, finds himself drilling for oil in the Middle East, battles pirates on the unforgiving ocean around Africa, becomes the patriarch of a huge family, falls in love with two women, and so much more. The filmmakers showed us the cliff notes version of all these events in their movie's expertly cut and extremely rousing trailer. The actual elaboration of these events and attempt at a coherent narrative, however, have plenty of cracks in the storytelling. This is because Bharat, the film, is complex, but Bharat, the character, is shallow.

Let us do what the movie so vehemently refuses to and elaborate on what we mean. Bharat's journey requires him to experience action, adventure, love, tragedy etc. while hinging on a singular promise he made to his father which has him return to his roots after every chapter in his life. This is a complex premise. While his dedication to his promise is admirable, his relationship with his father is not.

Bharat and his father share one and a half scenes before their eventual separation, and this acts as the inciting incident for the film. Throughout the movie's extensive runtime, we see Bharat reminisce about these scenes ad nauseum, but never add any more context or depth to their relationship. We are never shown Bharat's father teaching him valuable life lessons or sharing intimate moments with him. All that his old man does is levy a heaping helping of responsibility on his shoulders and move out of the narrative.

You are left to take in this massive film from Bharat's limited perspective. This narrative mechanism works at vindicating Bharat of all his self-serving actions while shielding you from the double-edged nature of his choices and their subsequent consequences.

This choice stops the movie's many episodes from layering on top of each other, which in turn prevents an emotionally satisfying final flourish. Dare we say, some of these episodes could have been omitted from the film entirely and it would have left little to no impact on the story at large. A vibrant and colourful mosaic should not have redundant pieces.

Anchoring this misguided medley is Bhai's best post-Bajrangi Bhaijaan performance. His smile is infectious, his energy is electric, and he actually bothered to learn his dance moves this time around. His tears too are nothing short of heart-warming. We say heart-warming instead of heart-breaking because the movie refuses to let him grieve over any loss except the ones of his father and sister. His tears when not being shed over the memories of his father are all ones of happiness and redemption. His character fails to acknowledge the sacrifices the people around him have made to accommodate his sometimes-erratic life choices.

Enabling Bharat's behaviour and supporting his decisions are Katrina Kaif's strong-willed Kumud Raina and Sunil Grover's affable Vilayti Khan. Kaif shines in the role that sees her begin as an employment officer and end up being the creative head of Zee TV. There is an excellent story to be told when looking at the events of this film from her perspective, but as we said earlier, Bharat's blinders keep him and you from experiencing her arc as a character. Sunil Grover keeps the smiles coming while reminding you that there is more to him as an actor than cross-dressing on Kapil Sharma's intolerable show.

The hits don't just stop with the performances of the actors. The songs accompanying their journeys will have you tapping your feet, and the set design, production values, artwork, cinematography and the sheer scale and scope of this massive undertaking will have you in awe. But like every other part of the film, all this good work is let down by some shoddy makeup work. The makeup artists chose to age up their characters by adding lines to their foreheads and wrinkles around their eyes, but forgot about how firm and youthful the necks under their chins look.

This level of oversight is prevalent across the film. And the less we say about the overuse of the stirring Zinda, the better. We call it shallow and complex instead of deep and simple for all these reasons and a few more you'll see when you watch the film.

This movie chronicles Bharat's journey through a few decades, but only one of the episodes from those decades can be classified as unabashedly good. This may be an indication of an unwritten code that Salman Khan gets to star in one all-round good movie once a decade. We had Bajrangi Bhaijaan for this one. So all we need to do is wait for another year and a half, and hope the next one comes sooner rather than later.
Share. Save. Connect.
Tweet
BHARAT SNAPSHOT 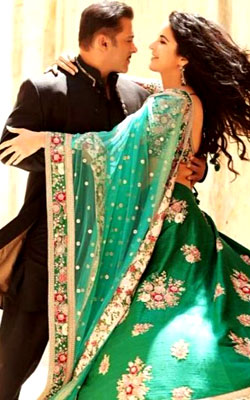 ADVERTISEMENT
This page was tagged for
bharat movie review fullhyderabad
Bharat hindi movie
Bharat reviews
release date
Salman Khan, Katrina Kaif
Follow @fullhyderabad
Follow fullhyd.com on
About Hyderabad
The Hyderabad Community
Improve fullhyd.com
More
Our Other Local Guides
Our other sites
© Copyright 1999-2009 LRR Technologies (Hyderabad), Pvt Ltd. All rights reserved. fullhyd, fullhyderabad, Welcome To The Neighbourhood are trademarks of LRR Technologies (Hyderabad) Pvt Ltd. The textual, graphic, audio and audiovisual material in this site is protected by copyright law. You may not copy, distribute, or use this material except as necessary for your personal, non-commercial use. Any trademarks are the properties of their respective owners. More on Hyderabad, India. Jobs in Hyderabad.