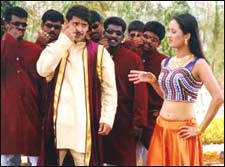 Mithun Verma / fullhyd.com
EDITOR RATING
1.0
Performances
Script
Music/Soundtrack
Visuals
NA
NA
NA
NA
Suggestions
Can watch again
NA
Good for kids
NA
Good for dates
NA
Wait to rent it
NA
Something very sad and tragic happens when you go to see Enjoy. You actually end up watching it. What's the point of going to a movie, if not for watching it, you ask? You're asking for a point, eh? Here are some points for you - .... Here, have a few for your neighbors as well - ....

Enjoy begins with these bunches of people generally enjoying themselves in a college by ragging the innocent freshmen. They make them do all sorts of despicable things like oinking like pigs, squatting likes birds and mooning like apes. Basically imitate all the seniors' behavior, except the part about the apes. That comes naturally for everyone in the film.

But this is no ordinary college, for it gives rise to the hero (Actor Ali's younger brother, Khayyum aka Ajay). The hero bravely puts his foot forward and squishes all the seniors going overboard with the ragging.

His bravery wins him a quick song with the heroine. Not much of a reward, but at least, he got the honor of being the only guy not revealing his naval in the song. Though occasionally he tried really hard jerking it out from under his pants. So, anyway, heroine's dad thinks the hero is not rich enough to marry his daughter. The hero is shocked. Such challenges are unknown in the history of Tollywood. He doesn't know what to do.

Even the makers don't know what to do. They introduce a few characters in a desperate attempt to murder any sense that might've survived this sewer explosion. Enter Ali and Mohan, the hero's brother. Now follow this carefully. The hero's brother knows that the hero needs money to impress the heroine's dad. So the hero and heroine sing a raunchy duet. Don't digress yet. Hero's brother swipes big bucks from a mobster to help the hero. So they show two incomplete men (Ali and another schmuck) turning into complete men by magical powers of a saint.

Now, now, now... let's not lose your temper over this. We must keep in mind that a film is made only to entertain you. This one is only doing that. It's just that you're not closing your eyes and trying to sleep. Do you know how entertaining this movie can make your nightmares look?

So, where were we? Doesn't matter; let's take it from the point when the hero's brother is dying in the arms of Ali. He tells Ali where he's hidden the stolen money. Then he dies. Ali wonders how much more a brother can do for a brother. He's already playing the repulsive role of a screwing eunuch in the movie. Oh, scratch the adjective there! And now, he has to witness a Telugu soap actor giving his death expressions up close. If only this was not his brother's debut movie...

Somehow (although we know how, for the benefit of the people against genocide)... so somehow, the stolen money reaches the hero, and Ali turns back into a non-performer (he was made a complete man by the saint, remember?). The heroine also turns back to doing what she's good at, which by the way, we haven't figured out yet. Just like the rest of the movie.

Khayyum is not yucky, but he's not hero material. The heroine was chosen after a thorough screening of her performance in an ad - Moods contraceptives. The hoardings are all over the city. The only things that save the movie are some good tear-jerking scenes. They're called comedy in other movies. They were saving, as they saved the expensive comedians a lot of bank balance.

On the whole, this movie will nonchalantly make you cry. Heck, it'll make the onions cry!
Share. Save. Connect.
Tweet
ENJOY SNAPSHOT

ADVERTISEMENT
This page was tagged for
Enjoy telugu movie
Enjoy reviews
release date
Ajay (Khayyum), Chitra
theatres list
Follow @fullhyderabad
Follow fullhyd.com on
About Hyderabad
The Hyderabad Community
Improve fullhyd.com
More
Our Other Local Guides
Our other sites
© Copyright 1999-2009 LRR Technologies (Hyderabad), Pvt Ltd. All rights reserved. fullhyd, fullhyderabad, Welcome To The Neighbourhood are trademarks of LRR Technologies (Hyderabad) Pvt Ltd. The textual, graphic, audio and audiovisual material in this site is protected by copyright law. You may not copy, distribute, or use this material except as necessary for your personal, non-commercial use. Any trademarks are the properties of their respective owners. More on Hyderabad, India. Jobs in Hyderabad.