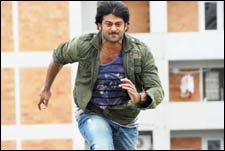 Deepa Garimella / fullhyd.com
EDITOR RATING
6.0
Performances
Script
Music/Soundtrack
Visuals
6.5
5.0
7.5
7.0
Suggestions
Can watch again
No
Good for kids
No
Good for dates
Yes
Wait for OTT
Yes
In Puri Jagannadh's spice-ridden world, women are entities that are either helpless and simpering, or accessible enough to tramps who make X-rated passes at them. And if it's someone's mother, she's both. Either way, it's no fun.

It's surely less fun than being the loner-hero, anyway. Because that about translates to being the most eligible bachelor in town - it's the loner who gets the most superhuman of strength, the cleverest lines and the coolest songs. And, thus, the hottest babe.

Chotu (Prabhas) was stolen from his crib when he was a baby, and falls into the hands of a vagrant called Chidambaram (Makrand Deshpande) who makes children beg. One day, Chotu tips off the cops and lands Chidambaram in jail, and discovers that he can get paid for this sort of thing.

The pleasures of bounty-hunting thus discovered, Chotu makes money dragging criminals to the police. One of his assignments takes him to the den of Johnny (Sonu Sood), who's just finished master-minding the murder of a politician.

He falls in love with Sameera (Kangana Ranaut), the impoverished sister of one of the fugitives he's running after. In the background of the story is a friendly couple in Sameera's neighbourhood, who're really Chotu's parents. There's also Chidambaram, who's out of jail after a decade and a half - he's the only one who knows who Chotu's folks are, but refuses to spill the secret.

Since Ek Niranjan announces its basic theme right at the beginning - that it is the story of how a kidnapped child gets back to his parents - you don't expect creative daring in the plot. The film consistely behaves like a formula lunch box, with no surprises.

There are a few logic issues - Chotu landing in Bangkok without any explanation behind the operations of his travel, for example. And, in case you didn't see this coming, there's a lot of violence, especially in the second half.

Chotu's zappy dialogues and Johnny's droll depravity remind you that there's indeed someone who's put thought into scripting the proceedings. Sonu Sood, then, sews up a sparkling role that gives him screen presence on par with that of the hero.

The main track and its screenplay are much wittier than the comedy tracks. Brahmanandam, Ali and Venu Madhav play out jokes that are functionally dead, and lewd a lot of the time, and do nothing to take the focus away from the rest of the story. Sunil, however, whizzes by with some cute antics - but again, he makes his entry on a bawdy premise.

Ek Niranjan is as much Sonu Sood's film as it is Prabhas', to be fair. Sood's wild-coloured wardrobe and his eccentric sadism actually redefine camp. And it's fun to see him go the Prakash Raj way of villainy.

And Prabhas is pretty spontaneous - his character has a casual cheer, that he's capable of carrying off quite easily. He's even made to shed a few tears in one scene, and it's a relief to have an actor do that without appearing to overdo it.

Kangana Ranaut, with her European looks, curls and dressing, is as incongruous as the shade of her lipstick. Sameera actually stands out like a sore thumb in the story - which starved music teacher dresses up like that, in a run-down neighbourhood at that? She's given as many "help!!!" scenes as a Tollywood potboiler can tolerate without splitting at its seams, and while she's not inept with the acting, her dubbing wasn't taken care of at all.

The baddies' band also has Mukul Dev and Brahmaji among others, who do well. Makrand Deshpande is an interesting watch, but that's about it to his role. Tanikella and Sangeetha are seasoned performers, and their roles should have been given more closure. Posani's fans have a little fun, though.

The title song steals the show, of course. A lot of the other songs are packed into the first half, and they're good to sit through. Puri's technical values are in place, though there's been too much effort on glossing up Kangana's look.

There aren't too many new ways you can narrate a story like this one. Ek Niranjan is fun cinema in its own way, but if you have a better movie to rush to, we won't stop you.
Share. Save. Connect.
Tweet
EK NIRANJAN SNAPSHOT

Movieluv on 1st Nov 2009, 9:50am | Permalink
Hey guys, I dont know whats going on here, but i want to tell you something. Prabhas movies are all overhyped. Can you tell me at least one movie's name, which is superhit other than "chatrapathi". His all movies are box office flops.
vam on 30th Oct 2009, 2:31pm | Permalink
stop cribbing the reviewer. This is one of the worst films I have seen in recent times. I do like prabhas but puri has basically done the same thing to death after pokiri. This isnt worth spending time and money on. The only thing that probably saves the ship is sonu sood.
RATING
4
malyam singh from up on 29th Oct 2009, 11:47pm | Permalink
papa gre ki masthu preparation lo undi .. shor jeyakunda sadavandri
AJ on 29th Oct 2009, 11:29pm | Permalink
Seriously Deepa, I really don't know what is more boring, the movies or your reviews! It's hard to understand what you want to convey. Most of the time it comes us an over-earnest attempt from a GRE-preparing yuppie eager to show of his/her newly acquire vocabulary. BTW, what is the meaning of "consistely"? Probably a new word which mundane chaps like us don't know yet!
sastry.m.s on 29th Oct 2009, 8:47pm | Permalink
Dont know about the movie, but its a boring review, fed-up reading regular styled reviews.
LEAVE A COMMENT
fullhyd.com has 700,000+ monthly visits. Tell Hyderabad what you feel about EK Niranjan!
MORE MOVIES
Latest Reviews
Elvis
Sammathame
Jugjugg Jeeyo
Godse
Nikamma
more
Virata Parvam
Ante Sundaraniki
Janhit Mein Jaari
Jurassic World: Dominion
Jurassic World: Dominion (Te...
Jurassic World: Dominion (Hi...
Vikram
MAJOR
MAJOR (Hindi)
F3: Fun and Frustration
Contemporary Reviews
This Is It
London Dreams
Aladin
Villagelo Vinayakudu
Jail
more
Ajab Prem Ki Ghazab Kahani
Yedukondalavaada Venkatarama...
Jayeebhava
Bumper Offer
All The Best
Bendu Apparao RMP
Blue (2009)
Main Aurr Mrs Khanna
Up
Random Reviews
The Scorpion King (Hindi)
American Desi
Lal Salaam
Suno Sasurji
Boogeyman
more
Nandanavanam 120 KM
Megamind - 3D
I Am Singh
Les Miserables
Lucky Kabootar
Fury
Nenu Shailaja
Valerian and the City of a T...
Glass
Eternals (Telugu)
SEARCH MOVIES
Dissatisfied with the results? Report a problem or error, or add a listing.
ADVERTISEMENT
SHOUTBOX!
{{todo.name}}
{{todo.date}}
[
ip{{todo.ip}}
]
{{ todo.summary }}... expand »
{{ todo.text }} « collapse
First  |  Prev  |   1   2  3  {{current_page-1}}  {{current_page}}  {{current_page+1}}  {{last_page-2}}  {{last_page-1}}  {{last_page}}   |  Next  |  Last
{{todos[0].name}}

ADVERTISEMENT
This page was tagged for
EK Niranjan telugu movie
EK Niranjan reviews
release date
Prabhas, Kangana Ranaut
theatres list
Follow @fullhyderabad
Follow fullhyd.com on
About Hyderabad
The Hyderabad Community
Improve fullhyd.com
More
Our Other Local Guides
Our other sites
© Copyright 1999-2009 LRR Technologies (Hyderabad), Pvt Ltd. All rights reserved. fullhyd, fullhyderabad, Welcome To The Neighbourhood are trademarks of LRR Technologies (Hyderabad) Pvt Ltd. The textual, graphic, audio and audiovisual material in this site is protected by copyright law. You may not copy, distribute, or use this material except as necessary for your personal, non-commercial use. Any trademarks are the properties of their respective owners. More on Hyderabad, India. Jobs in Hyderabad.