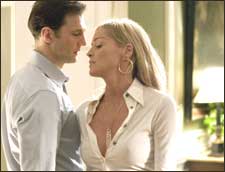 Kavita Krishnamoorthy / fullhyd.com
EDITOR RATING
3.0
Performances
Script
Music/Soundtrack
Visuals
NA
NA
NA
NA
Suggestions
Can watch again
NA
Good for kids
NA
Good for dates
NA
Wait to rent it
NA
How does one start writing a review about a diabolically insane movie such as “Basic Instinct 2”? Well, a logical start would be to compare it with its predecessor. But then, since when has logic ever been a part of the Basic Instinct (BI) genre?

Sharon Stone is back as the raunchy nymph Catherine Tramell looking oh-so-ravishing as ever. Like all of us, she’s 14 years older. And unlike most of us, still looks resplendent. True - she must’ve had a nip ‘n’ tuck or two, but hey, who’re we to judge?

The movie starts off with a huge bang – Catherine’s racing down the streets of London in a slick sports car along with a soccer “friend” of hers. For some inexplicable reason, she runs the car into the Thames and leaves her co-passenger to drown. And she manages to literally get away with murder on some bizarre technicality.

Dr. Michael Glass (David Morrissey), a renowned psychologist, is introduced to her, and deduces that she has some “issues” that makes her “addicted to risk”. It doesn’t take too long for him to get caught up in her seductive powers as she signs up for private therapy with him.

The people around him then start dropping like flies, and once again you’re caught up in a game of whodunnit where any one of two or three possibilities could be true. Catherine manages to steer the suspicion to the cop who’s been assigned this case (remember Beth Garner?), at the same time writing a book about a “fictional” analyst and his life.

While the sex scenes in BI were logically induced into the plot, the ones in BI2 seem rather embarrassing, and just don’t fit in with the storyline. As sexy as she looks, the sleazy dialogues rolling off Stone’s tongue don’t sound like they’re coming from a mature Catherine Tramell, but rather like she’s trying her darn best to imitate her.

Catherine talks too much in this movie, and while her silence (and don’t forget the eyes) spoke volumes in the first part, she shoots her mouth off a bit – actually, make that a lot – here. The most gripping the story gets is when the car flies off into the river, but sadly, that’s over and done with in the first 5 minutes.

David Morrissey takes up a lot of screen time, much to the annoyance of everyone, because neither is he as hot as Michael Douglas was, nor can he display any emotion other than placidity. That’s it – throughout the movie, he’s got just one single expression. And we’re supposed to believe that Catherine actually finds this character intriguing enough to write a whole book on.

The rest of the movie can be described in one simple word – boring. While BI managed to keep its audiences on the edge of their seats till the very end, BI2’s only claim to fame could be that it’s set in London. And even London has looked better.

Even the twist at the end seems like a desperate attempt to mime the ending of the original. But while the mothership will be remembered for a lot of things (including the infamous “leg-crossing” scene), sadly all BI2 will probably be remembered as, is as a sequel that spent too long in the making. It doesn’t even hold a matchstick to BI, and fails to entertain the mind (or any of your other senses, but you can credit that to our dear censor board).
Share. Save. Connect.
Tweet
BASIC INSTINCT 2 SNAPSHOT

ADVERTISEMENT
This page was tagged for
englishmovie.basicinstinct 2
english movie basic instinct
Basic Instinct 2 english movie
Basic Instinct 2 reviews
release date
Follow @fullhyderabad
Follow fullhyd.com on
About Hyderabad
The Hyderabad Community
Improve fullhyd.com
More
Our Other Local Guides
Our other sites
© Copyright 1999-2009 LRR Technologies (Hyderabad), Pvt Ltd. All rights reserved. fullhyd, fullhyderabad, Welcome To The Neighbourhood are trademarks of LRR Technologies (Hyderabad) Pvt Ltd. The textual, graphic, audio and audiovisual material in this site is protected by copyright law. You may not copy, distribute, or use this material except as necessary for your personal, non-commercial use. Any trademarks are the properties of their respective owners. More on Hyderabad, India. Jobs in Hyderabad.