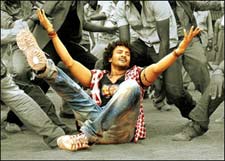 Deepa Garimella / fullhyd.com
EDITOR RATING
5.0
Performances
Script
Music/Soundtrack
Visuals
7.0
5.0
6.5
7.0
Suggestions
Can watch again
No
Good for kids
No
Good for dates
Yes
Wait to rent it
Yes
Aishwarya (Bindu Madhavi) is stinking rich, and can have anything she wishes for in life. But going by what she covers her body with, she seems to want very little. Except for driving a brand new car everyday. And breaking the skull of any guy who rubs her the wrong way (ha!). This spoilt brat is the daughter of Suryaprakash (Sayaji Shinde), a ruthless and rotten businessman.

The life of Sai (Sairam Shankar) is a study in contrast. The members of his family live hand to mouth, in a 3-room tenement. Sai doesn't have servants to do things for him, like driving, washing, cleaning and decent dubbing. This explains why we have to tolerate him and his mother (Kovai Sarla) jarring the sound waves.

One day, Sai gets unintentionally beaten up by Aishwarya's men. She's not repentant at all. No one would be, after listening to Sai's dialogue delivery. However, the 2 fall in love within a few scenes. Suryaprakash's blood boils at this. Especially since Sai had insulted his wife earlier.

He gets Sai as well as his father (Chandramohan) whacked. Then, he challenges Sai to earn at least a fraction of his immense wealth. How else is he to take care of the pampered Aishwarya and gift her new strips of cloth everyday?

Sai doesn't think much of the idea. That's because no one who has jumped 10 feet off the ground and then onto some goons, can think much. He says the logical way to level their statuses is to render Suryaprakash homeless, especially because all his riches are ill-gotten. In the rest of the story, Sai does what he promises, getting his future pa-in-law publicly humiliated in the process.

What Bumper Offer does is milk the poor-guy-rich-girl romance using a left-handed approach. The rude affluent girl being put in her place by an equally rude street side mechanic seems a bit much to take in these times, but the hero's desire to change the parameters of his talent show makes it a curious watch. Fortunately, the movie has some slick editing to regularly keep you interested in the next scene, even if you keep forgetting to clean up your memory every 5 minutes.

The moneyed characters in the film are regular caricatures, and must not be imitated without adult supervision. The dialogues on the other hand, must be imitated only without adult supervision, since they contain a lot of irreverent addressing of elders, though they're quite funny. There's some more comedy when Ali and Venu Madhav pitch in with their take on Magadheera.

The second half slumps a bit, with Sai's plotting. The film also has some cheesy rants on women's activists, the software slump and defaulting banks, that are evidently the makers' personal opinions.

Sairam Shankar is earnest, but he really needs to get someone else do all the talking, if he's planning to stick around and be liked. Bindu Madhavi's pretty, but she's all skin and flesh. This is an oddball couple that doesn't really get chemical reactions started.

Sayaji Shinde is great to watch. Chandramohan's character grovels too much, and is a put-off. And we should thank the angel who told Kovai Sarla to tone it down.

The music and visuals are professionally done, and the songs are mostly numbers with intense percussion. However, the Troy images in the Magadheera track should have been wiped clean.

On the whole, nothing catastrophic for the ones who watch everything in town.
Share. Save. Connect.
Tweet
BUMPER OFFER SNAPSHOT


Pros: none
Cons: hero story and everything possible

ADVERTISEMENT
This page was tagged for
Bumper Offer telugu movie
Bumper Offer reviews
release date
theatres list
Follow @fullhyderabad
Follow fullhyd.com on
About Hyderabad
The Hyderabad Community
Improve fullhyd.com
More
Our Other Local Guides
Our other sites
© Copyright 1999-2009 LRR Technologies (Hyderabad), Pvt Ltd. All rights reserved. fullhyd, fullhyderabad, Welcome To The Neighbourhood are trademarks of LRR Technologies (Hyderabad) Pvt Ltd. The textual, graphic, audio and audiovisual material in this site is protected by copyright law. You may not copy, distribute, or use this material except as necessary for your personal, non-commercial use. Any trademarks are the properties of their respective owners. More on Hyderabad, India. Jobs in Hyderabad.