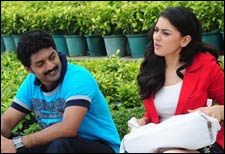 Deepa Garimella / fullhyd.com
EDITOR RATING
5.0
Performances
Script
Music/Soundtrack
Visuals
6.0
3.0
5.0
6.5
Suggestions
Can watch again
No
Good for kids
No
Good for dates
Yes
Wait to rent it
Yes
Bhavani (Mukesh Rishi) and Narsimha (Jayaprakash Reddy) are sworn enemies, each of whom hates his toes being treaded on by the other. But it's something they can't help doing - like inadvertently slapping a mosquito on your cheek. It's just as reflexive and ordinary an act, and as painful to the men as it is to the mosquito. And to the audience as well.

Of the 2 men, Bhavani is supposed to be cleaner than Narsimha, since he's some kind of local benefactor who people run to when they have issues. Narsimha, on the other hand, is the issue many people have.

Bhavani's son Ram (Kalyanram) lives in the US because his dad doesn't want him to get harmed by his (Bhavani's) enemies here. To the collective roars of appreciation from an audience that is ignorant to what its state of mind will be an hour hence, the son comes back.

His very first night here, he beats up Narsimha's oily henchmen in a pub. Then he goes to Hong Kong and gets the dreaded cricket betting king Yadu Bhai (Ashish Vidyarthi) arrested. This he manages by making the Pakistani cricket captain expose Yadu Bhai on world television. Naturally Yadu Bhai is not thrilled. Neither is the skipper, for being given lines in such atrocious Telugu-accented Hindi.

In Hong Kong, the giggly Anjali (Hansika) falls for him. This is because he has saved her from some muggers, and more importantly, from having to act. They romance for a while even after coming back to India. Soon, it is discovered that Anjali is Narsimha's daughter.

Anyone who's awake expects heads rolling, daggers ripping people apart, and a full refund of his ticket. However, no one is prepared for what comes next. Jayeebhava's scriptwriters reluctantly wake up. The second half is all about how Ram and Anjali take their places in each other's homes, so they can convince their elders using their heads.

Jayeebhava begins with a plot so familiar it deadens the mind - a generous sprinkling of violence and disgusting villains and warring goons. It then moves on to a famished romance - making you think it's an accessory to the revenge - that numbs the senses even more.

What's hence pleasantly surprising its focus on comedy and the families in the second half, even if the clichÃ©s are nothing for the writers to be proud of. There are no great dialogues, no jokes that elicit half a grin, and very little suspense. Zero violence in this half makes it tolerable to sit through it, however.

The comedians are good - Venu Madhav, Brahmanandam, Raghu Babu and Ali are given plum roles in the clowning department. Hansika does nothing but either giggle or simper. Kalyan Ram too is not much fun, mostly because of his significant lack of energy. The other actors are their usual selves, with roles that got hopelessly monotonous a long time back.

The visuals are ho-hum, but someone has done some unfortunate tinkering around with some of the songs, with crummy animation here and there. The songs consist of standard-issue dance numbers that you'll easily forget once you're out of the theatre.

Jayeebhava does not aim for a lot. All it does is test the limits of audiences' tolerance to mediocrity. Go in if you're inoculated.

ADVERTISEMENT
This page was tagged for
Jayeebhava telugu full movie today pk
Jayeebhava telugu movie
Jayeebhava reviews
release date
Kalyan Ram, Hansika
Follow @fullhyderabad
Follow fullhyd.com on
About Hyderabad
The Hyderabad Community
Improve fullhyd.com
More
Our Other Local Guides
Our other sites
© Copyright 1999-2009 LRR Technologies (Hyderabad), Pvt Ltd. All rights reserved. fullhyd, fullhyderabad, Welcome To The Neighbourhood are trademarks of LRR Technologies (Hyderabad) Pvt Ltd. The textual, graphic, audio and audiovisual material in this site is protected by copyright law. You may not copy, distribute, or use this material except as necessary for your personal, non-commercial use. Any trademarks are the properties of their respective owners. More on Hyderabad, India. Jobs in Hyderabad.