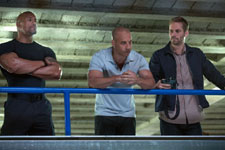 Samrat Sharma / fullhyd.com
EDITOR RATING
5.0
Performances
Script
Music/Soundtrack
Visuals
6.5
3.5
7.0
8.0
Suggestions
Can watch again
No
Good for kids
No
Good for dates
No
Wait for OTT
Yes
The previous installment of the Fast And Furious franchise completely gave up on the street-racing theme of the first four Fast And Furious films, and took a sharp right into James Bond lane. Spanning multiple locations and an elaborate heist involving guns, cars, and muscles, it took the heady mixture of stupid and fun action that the series is known for, and went hard on the fun action. Add to that the charismatic Dwayne Johnson, and things were finally looking up for a series world renowned for not making sense.

Clearly, the last film must have been an eye-opener for director Justin Lin and crew, as they have upped the ante on whatever worked last time. Gone is the pretense of any street-racing - this is completely a James Bond film now. Chasing evil-doers across the globe, saving London from dastardly terrorists, and trying to find out the truth about a long-lost partner, this film goes all out in creating the ultimate Fast And Furious experience.

Unfortunately, it veers heavy on the stupid side again. The writing is non-existent, as puerile jokes, unfunny moments and a plodding pace take their toll while you wait for the next action fix. Nothing makes sense - I mean, utterly nonsensical plot points aside, there are small moments within the action scenes that do not fail to befuddle immensely.

In his attempts to bring everything to a seeming closure, Lin spends a lot of time on poorly written bits where the characters mumble inane dialogue at each other. None of that is interesting, and does not take the characters anywhere. It's just a breather between action scenes, and the breathers last eons at times.

As Dwayne Johnson takes his sweet time catching us up, Michelle Rodriguez's character is seemingly back from the dead, this time with amnesia. This spurs Vin Diesel and Paul Walker to team up once again to try and capture Luke Evans.

Hung on this skeleton of a plot are expository pieces that don't mean anything. One 15-minute bit where Paul Walker goes on a solo mission literally teaches us noting we haven't learnt, and is egregiously a waste of time. It's doubly frustrating when the same nonsense is repeated multiple times via other talking heads.

It appears as if the film was conceived in a frat house with the action moments excitedly screamed while Nascar played on the telly. Someone jumps on a moving car! Someone jumps and catches a flying person! Someone drives a car through a flying aeroplane! While those moments are decidedly cool, everything else that is part of this fast and furious gig is a dud.

They had the chance to make a film with satisfying emotional beats and good action, but they chose only half of it to be true. The other half is squandered on dull and boring bits that do not add to the film, and make you check your phone in the cinema multiple times. The action, too, suffers, when it keeps on going with no end in sight, so much so that fatigue sets in at least twice during the set pieces. Wait this one out.
Share. Save. Connect.
Tweet
FAST & FURIOUS 6... SNAPSHOT
FAST & FURIOUS 6 (TELUGU) SNAPSHOT

ADVERTISEMENT
This page was tagged for
fast and furious 9 movierulz telugu
fast & furious 9 movie free download
Fast & furious 6 movierulz com
Fast and Furious 6 full MovieRulz
Fast and Furious 6 Telugu movierulz
Follow @fullhyderabad
Follow fullhyd.com on
About Hyderabad
The Hyderabad Community
Improve fullhyd.com
More
Our Other Local Guides
Our other sites
© Copyright 1999-2009 LRR Technologies (Hyderabad), Pvt Ltd. All rights reserved. fullhyd, fullhyderabad, Welcome To The Neighbourhood are trademarks of LRR Technologies (Hyderabad) Pvt Ltd. The textual, graphic, audio and audiovisual material in this site is protected by copyright law. You may not copy, distribute, or use this material except as necessary for your personal, non-commercial use. Any trademarks are the properties of their respective owners. More on Hyderabad, India. Jobs in Hyderabad.