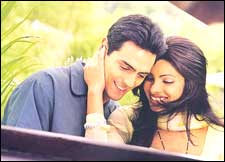 Ghazala Rizvi / fullhyd.com
EDITOR RATING
6.0
Performances
Script
Music/Soundtrack
Visuals
NA
NA
NA
NA
Suggestions
Can watch again
NA
Good for kids
NA
Good for dates
NA
Wait for OTT
NA
Yakeen starts where most movies you wish would end - in a car accident that kills the entire cast. But trust the Bhatt clan to propel ahead the story, churned up from even the most trite ideas, namely amnesia. Purged of even the most remote props that go into the making of a thriller, Yakeen still turns out a mind-boggler. Ridding powerfully on the back of a solid story and script, it is a simple yet excellent narration of bizarre incidents.

Simar (Priyanka Chopra) and her husband Nikhil (Arjun Rampal) are confined to the hospital after a ghastly car accident that, though largely sparing Simar, leaves Nikhil's face badly mauled. With help from his doting wife, Nikhil's revival is complete, except that his long-term memory refuses to function. A couple of insipid songs that fail to shock him out of his amnesia later, Simar declares a holiday from rest and sends him packing back to work.

Nikhil discovers that despite being a renowned architect, he cannot find his way through the concrete jungle. He also discovers that his wife's many virtues do not include fidelity. His close friends Siddhartha (Saurabh Shukla) and Tania (Kim Sharma) jog his memory further - Simar has been making out with Kabir (Deepanshu Pandey) when Nikhil was busy musing over issues of making money.

Nikhil's nascent brain is further jarred by Simar's devoutness, and later, by her confession of a passing affair. Alienation from her money-churning husband had made fertile ground for love to blossom out of marriage. A chance sexual encounter with a celebrity drum-strummer Kabir changes all their lives.

Nikhil is as seriously ticked-off as any other ordinary husband should be. He hires the services of a private eye to track down his wife's affairs, but more urgently, his own. Armed with his palm-reader friend Tania, Nikhil forays into a discovery of his own self.

Arjun Rampal, as a person suffering from the dual strokes of a missing memory and an errant wife, reveals his acting skills for once. However, the severely restricted role, bound by the mannerisms of an amnesia patient, confines him to being either angry or immersed in silence. There is potential written all over his face and body, which is left unexploited by the script.

Kim Sharma's recent roles in Hindi movies are certainly keeping up with the length of her ever-shortening skirts. In her little-more-than-a-cameo role, she carries a long-faced expression coupled with a few intriguing whispers. The music by Hashim Reshamiya has placed almost all the singers including Sonu Nigam in discredit.

Yakeen is a superb story with a climax that will hit you, and yet it is not likely to do well commercially. Like Nikhil's memory, it has no backups in the form of scintillating songs, steamy scenes or even enough dead bodies - the fashionable ingredients that define a thriller. Perhaps this, and the poor timing of its release (with Sarkaar and several Telugu films hitting the theaters) might prove to be its undoing.
Share. Save. Connect.
Tweet
YAKEEN SNAPSHOT

ADVERTISEMENT
This page was tagged for
Yakeen hindi movie
Yakeen reviews
release date
Arjun Rampal, Priyanka Chopra
theatres list
Follow @fullhyderabad
Follow fullhyd.com on
About Hyderabad
The Hyderabad Community
Improve fullhyd.com
More
Our Other Local Guides
Our other sites
© Copyright 1999-2009 LRR Technologies (Hyderabad), Pvt Ltd. All rights reserved. fullhyd, fullhyderabad, Welcome To The Neighbourhood are trademarks of LRR Technologies (Hyderabad) Pvt Ltd. The textual, graphic, audio and audiovisual material in this site is protected by copyright law. You may not copy, distribute, or use this material except as necessary for your personal, non-commercial use. Any trademarks are the properties of their respective owners. More on Hyderabad, India. Jobs in Hyderabad.