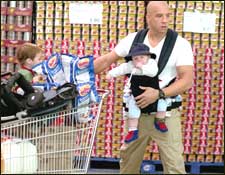 Howard Plummer, a top Pentagon scientist, glamorously gets assassinated, leaving behind a wife, five children and a very well-hidden, top-secret computer chip. His wife, Julie, is forced to go to Switzerland to help solve the mystery of the chip's whereabouts, and while she is gone, a reliable nanny has to be found to look after the kids.

Enter Shane Wolf (Vin Diesel), a trusted Navy SEAL. This hulking hunk has directed amphibious landings in Somalia and successful air raids on Serbia but his latest destination is the most perilous of all - Suburbia. Wolf is to act as babysitter for the Plummer kids, and he's packed off to their home before he can shoot his toe and go AWOL to Canada.

Meanwhile, it turns out that Plummer's chip ain't so top-secret after all. The bad guys are after it too, so Wolf has to both look after the kids and ensure no one breaks into the house. Tall order, given that the kids have fine-tuned their guerilla warfare skills as a welcome present for him. The five effortlessly harass the living daylights out of Lieutenant Wolf, and he counter-strikes by imposing a martial regime on the Plummer residence. Once there is a break-in, however, the kids find out even Navy SEALs have their uses.

The kids soon become fond of Wolf and vice-versa, and he teaches them everything he knows about life, which, as it turns out, is precious little. So the kids and Wolf end up learning about some basic survival skills from each other. For the kids, it's driving and for Wolf, it's changing diapers. Smelly and dangerous though the lessons are, everyone's well on their way to happily ever after when the climax rudely interrupts. And in this tale-twice-told ending, the top Pentagon honcho turns out to be an enemy agent, Wolf foils his evil plans, and yes! They're all back on their way to happily ever after.

So this isn't the most original of plots, and the screenplay could certainly use a heavy dose of fresh breath mints, but hey, it isn't every day that you get a good, clean (never mind the diapers) dose of action-turned-comedy. And now that Arnold has pole vaulted in an oh-so-Indian fashion from moviedom to politics, we're probably not going to see too many rock-solid men on screen either.

Vin Diesel's first lurching steps towards comedy can pass for entertainment, but won't get him near any award shows. In fact, the only thing that might win an award is the plot for maximum rehash value. The kids with their growing pains are heavily stereotyped but adorable.

All in all, The Pacifier is total timepass and is recommended for the kids.
Share. Save. Connect.
Tweet
THE PACIFIER SNAPSHOT

ADVERTISEMENT
This page was tagged for
The Pacifier english movie
The Pacifier reviews
release date
Vin Diesel, Lauren Graham
theatres list
Follow @fullhyderabad
Follow fullhyd.com on
About Hyderabad
The Hyderabad Community
Improve fullhyd.com
More
Our Other Local Guides
Our other sites
© Copyright 1999-2009 LRR Technologies (Hyderabad), Pvt Ltd. All rights reserved. fullhyd, fullhyderabad, Welcome To The Neighbourhood are trademarks of LRR Technologies (Hyderabad) Pvt Ltd. The textual, graphic, audio and audiovisual material in this site is protected by copyright law. You may not copy, distribute, or use this material except as necessary for your personal, non-commercial use. Any trademarks are the properties of their respective owners. More on Hyderabad, India. Jobs in Hyderabad.