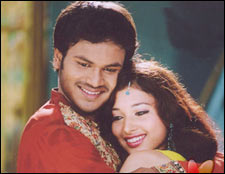 EDITOR RATING
3.0
Performances
Script
Music/Soundtrack
Visuals
NA
NA
NA
NA
Suggestions
Can watch again
NA
Good for kids
NA
Good for dates
NA
Wait for OTT
NA
The good news first – there’s something after all in Sri for fans of Mohan Babu, since he does a brief cameo in the film. The bad news is that you have to stay till the second half for it.

Sri is a dud. It is but natural that Mohan Babu would be screening the scripts for his son's first few films. Mohan Babu, however, is from the generation where the villian was a land-grabbing village feudal lord, and the hero was Krishna. It's not surprising then that the same script happens in Sri. Bad theme for 2005.

So, Sriram (Manoj) is a youngster who can beat up several hooligans single-handedly. At a religious event he sees Sandhya, and falls in love with her instantly. The same cannot be said of Sandhya, and he courts her for a good half-hour, in what would be one of the more unimaginative courtships to hit Telugu screens recently. It is this part that does the most damage to the film – it becomes hard to view a film neutrally after you’ve been bored by the first hour.

Sandhya is part of a family that has been targeted for murder by Bhikshapati (Devaraju), a powerful and blood-thirsty village landlord, since her family is trying to free the lands seized by him from the poor peasants of the village. When Sri finds out about this, he comes to their rescue, and the second half is all gore.

The film is a complete bore, with even the comic track disappointing. Brahmanandam is wasted one of the most stupidly written roles of his career – it’s only because it’s Brahmanandam there that the sequence appears even remotely tolerable. Krishna Bhagavan, the rising comic star, is also misused in one of those stupid roles where he is the villian’s sidekick but criticizes the villian snidely standing right next to him. The dialogues of Raghubabu, Krishna Bhagavan, Sunil and all the comic cast betray either a complete lack of talent in the writers, or too little time spent. Sunil has one or two decent dialogues, and that’s it.

Manoj is more energetic than most newcomers, though he has most of the problems with dialogue delivery that debutants have. His career has to be built, at least initially, more by his dad (who is also President of the MAA) lining up the best banners and directors for him, than by any acting prowess. But he is more likely to develop into an actor eventually than several other star sons.

Tamanna has a role that needs some prettiness and some taunting expressions, and she delivers on both, though she’s perhaps a little too small to emerge a mainstream Telugu heroine. The songs come more as an unwelcome interruption to the story, and are hardly hummable, with just a rap number being mildly tolerable. Sandeep Chowtha, like all current Indian music directors, seems to be able to get 1 good tune for every 20 he composes, and is either highly overrated or, more likely, taking on too much work.

The film might not appeal to the youth due to the village feudal theme. The first half bores and the second continues it, and on the whole, Sri is a movie to skip. Only fans of Mohan Babu might salvage something for his son.
Share. Save. Connect.
Tweet
SRI SNAPSHOT

ADVERTISEMENT
This page was tagged for
Sri telugu movie
Sri reviews
release date
Manoj, Tamanna
theatres list
Follow @fullhyderabad
Follow fullhyd.com on
About Hyderabad
The Hyderabad Community
Improve fullhyd.com
More
Our Other Local Guides
Our other sites
© Copyright 1999-2009 LRR Technologies (Hyderabad), Pvt Ltd. All rights reserved. fullhyd, fullhyderabad, Welcome To The Neighbourhood are trademarks of LRR Technologies (Hyderabad) Pvt Ltd. The textual, graphic, audio and audiovisual material in this site is protected by copyright law. You may not copy, distribute, or use this material except as necessary for your personal, non-commercial use. Any trademarks are the properties of their respective owners. More on Hyderabad, India. Jobs in Hyderabad.